Stone to the Head 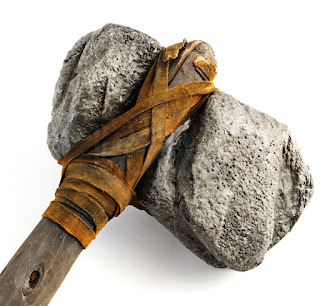 When I have exhausted options, I look through the US Army survival manual and every time I read that thing,  I conclude, 'The US Army want's it's people dead".

The subject of this discourse is STONE CLUBS which seem a great deal important to the US Army as they list a number of them from wrap arounds to sling clubs. The reason for making them apparently is for hunting, fighting and just because having a weapon makes one feel secure.

The ideas behind these stone clubs though are all asinine though.  It begins with 'find a rock the size of a club".

You are not going to find a rock like that and then the great idea of wear a groove around the rock.

The solution is to chip the stone off for the groove. They do not mention though that clacking rocks together alerts every enemy in the world that you are there and there they will come and kill you.

It is the same with spears in you are told to chip off the edges to make a spear or knife. The problem with this is as noted by ISHI the California Indian by Pope and Young, as that when you are flaking of stones that chips fly into your eyes and lodge there.
Ishi would beat his hand on the side of his head to knock them out, which probably knocked him out, but the thing is, it is not a good idea to be going blind behind enemy lines, clacking on stones.


Then there is the reality that wood is going to break as a handle and where are you going to get lashing to put the stone on the stick? Yes use your shoelaces and get blisters or cut up your clothes and freeze to death.

Yes I can see it now in the statistics that numbers of Americans were found dead, and by their skeleton was a good stone hammer, but they had died of exposure or an enemy bullet to the head, as they froze to death in building the club, instead of a shelter and in a wonderful world, while they were clacking away they got shot.

Everything always looks great in a book, until you try to make some ungodly thing that never will work.

That is the Lame Cherry exclusive in matter anti matter.