The Greatest Novel Ending Ever 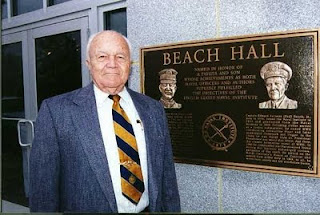 I believe the best human inspired beginning to a novel is "It was the best of times. It was the worst of times",  but in literature by humans, as the Bible is perfection in, IN THE BEGINNING and ends with AMEN, people do not have an ability to end a novel or memoir satisfyingly.

For me, I have found the best ending to any book ever, and it was a throw away book, a free book, entitled Submarine, by Captain Edward L. Beach of the United States Navy.

Beach is interesting as his father was a Navy man, and Beach jr. had to be forced into joining in the submarine program at the onset of World War II. He had a remarkable career aboard the USS Tang and as the war ended, literally on the last day he finally got his submarine the USS Piper into Japanese waters for the war, after a risky and mad dash through Japanese mine fields to get on station.

I think by the Holy Ghost that the reason Ned, as his friends called him, did not get involved in the war, was his new wife was probably praying for him to be kept safe and out of the war, as Beach jr. had nothing but delays and problems in 1945 AD in the year of our Lord in getting to Japan.

When he received his promotion to command the Piper, she was out on patrol and maddeningly was out the entire time, did not see any real action, and then was kept in Pearl by Admiral Stockwell for refitting of new acoustic equipment, and he then delayed Piper at Midway for more testing, whereby Piper had engine problems and Beach jr. finally ordered shoved off, and they would repair in route.

There were many ghosts for Ned Beach. Ships had been lost on which he served and men with crew that he knew.The legendary Wahoo went down after being a terror to the Japanese, and was replaced by Commander O' Kane who sought vengeance and did wonderfully, until one of General Electric's shitty torpedoes got stuck running circles after launching and blew a hole in the USS Tang, where only 9 survived to be tortured by the Japanese.
It was this fervor that had Beach jr. shooting holes in fishing boats that might have radioware on board, as he wanted to get in his licks, but he never did, as the war ended.

Slightly after 1 pm on August 15th, after those strange big bombs destroyed Hiroshima and Nagasaki, the Japanese surrendered, but in that afternoon, Ned Beach was melancholy and  he could not make merry with the rest of the crew celebrating.
He wet to his quarters, pulled the curtain and although it rustled some, the crew stayed away from their Commader and that is where Beach stayed until late.

He appeared next on the deck of his cruising submarine, a place that no one could go without special permission ever, but as Beach was commanding, he could be there, and paced back and  forth on the deck, thinking of all the dead, and how he had  somehow survived. He concluded that it has simply been bad luck for the others in their assignments and his good luck in moving to another ship, being promoted or not being placed on a ship with a skipper who got their sub sunk.

It was in that revelation that the best  ending in literary history appears, for Ned Beach looks up to see his crewman, Jerry Reeves, chuckling and yelling, while waving a piece of paper at him.

Beach approached and Reeves was scolding his Commander with, "You old bastard, SIR, why didn't you tell anybody!!!"

Ned Beach ends with, "the war had come to an end, and life, for some of us, was beginning.

I like that ending, because you had to know the good submariners. Ned Beach had somehow in over 2 years of war, survived hundreds of depth charges. He had been on submerged subs which had inches of muck on the floor, 135 degrees, almost no air, as the sub could not surface due to Japanese destroyers hunting the ships he was on, after they had sunk Japanese convoys.

The last drumming that Ned Beach took was on the Tirante, where 6 Japanese destroyers were pounding the ocean with depth charges, herding that submarine, and where his Commander had ordered him to go get some sleep as he needed his Ex O fresh for the night command if the pounding continued.
In that Ned Beach obeyed after protest, and before entering officer quarters heard the inexperienced wondering how long the ship could take such a beating with cork and dust in the air, pipes vibrating to hurt a hand which touched them, and and wondering how long the batteries would hold out.
Beach entered the quarters and told the other officers that he had to get some sleep, which amazed them as he laid down, and he turned to the wall listening to the screws of the destroyers making runs on Triante, the ship shaking in the explosions, Ned not wanting the other crew to see his eyes fluttering or that he was shaking in fear.
In time the Japanese charges moved off and Ned drifted off to sleep and awoke to find her skipper had found a hole in the destroyer's circle that Triante finally slipped away to safety.

Tens of thousands of American submariners perished horrifically in World War II. That is why Ned Beach was pacing on the deck of his ship and why the birth of his daughter meant so much in an ending to a war, that life, precious life did continue.