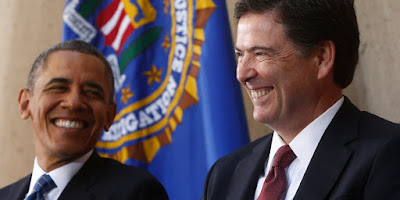 In the words of James Comey in the final days of the image Obama regime, there is a reality which has appeared, and it is the reality that behind this coup against Donald Trump and the 2016 AD in the year of our Lord elections, and that is James Comey, stopped being FBI Director for Birther Hussein Obama, and reverted to Federal Prosecutor in interviewing Donald Trump in order to entrap him.

James Comey was the centralized figure in this, activating against Donald Trump. In one of the oddest realities that Donald Trump would face, is the Obama regime had the Pissgate Dossier, had Joe Biden declaring this was Treason, and instead of a necessary briefing involving the FBI, DOJ and CIA heads, due to the seriousness of this file, with the knowledge that this file was bogus and provided by foreign intelligence agencies, to disrupt the American Government, it was only James Comey, in a Comey said Trump said.


In his book, A Higher Loyalty, Comey writes that he told Obama, Biden and Rice about his plans to have the private briefing with Trump.  He did this on January 5, 2017 in a White House briefing with Obama one day before he met Trump and underhandedly sent the details of their one-on-one to the FBI’s “Crossfire Hurricane” team handling the Russia collusion claims. 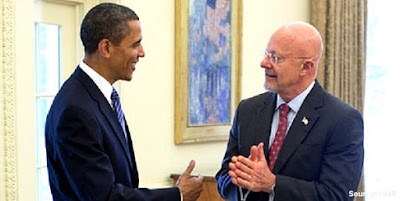 This all began with Bush appointee James Clapper, who was briefing image Barack Obama and Congress the next day, with James Comey flying to New York to "brief" Donald Trump.

It was in this meeting that image Obama asked Comey about the plan to brief Donald Trump. It was Clapper in the "we" telling Obama that Comey would meet with Trump alone, as this was designed to send in James Comey as Federal Prosecutor to question Donald Trump and not brief him.

Comey states Obama gave a Grouch Marx eyebrows to the briefing plan which Comey took to mean, "This is going to go bad". Later the Director of Homeland who was friend of Comey's in prosecutor days, phoned him up and said to be careful with Donald Trump as it probably would not go well.

The reality is in this, is the question, in when everyone knew it was a bad idea for Comey to engage Trump alone, then why would all still agree to this dysfunctional plan, as the purpose was not in normal circumstances to not create a  disaster liaison with the incoming President?
The reality is, this was set up for Comey to rattle Donald Trump, because from Obama on down, they all wanted to spook the President elect in order to get him to reveal something.

After an extended discussion on the intelligence assessment, the president asked what the plan was for further briefings. Director Clapper explained that we were to meet the Gang of Eight the next morning—the top officials in Congress, both Democrats and Republicans, briefed on intelligence matters—and then we would go immediately to New York City to brief the president-elect and his senior team. Clapper explained to Obama that there was an unusual matter that needed to be brought to Mr. Trump’s attention: additional material—what would become commonly called “the Steele dossier”—that contained a variety of allegations about Trump.
Comey writes that Obama specifically asked about the details of the “plan” to brief Trump:
Obama did not appear to have any reaction to any of this—at least none he would share with us. In a level voice, he asked, “What’s the plan for that briefing?” With just the briefest of sidelong glances at me, Clapper took a breath, then said, “We have decided that Director Comey will meet alone with the president-elect to brief him on this material following the completion of the full ICA briefing.” The president did not say a word. Instead he turned his head to his left and looked directly at me. He raised and lowered both of his eyebrows with emphasis, and then looked away. I suppose you can read whatever you want into a wordless expression, but to my mind his Groucho Marx eyebrow raise was both subtle humor and an expression of concern. It was almost as if he were saying, “Good luck with that.” I began to feel a lump in my stomach…

Later that day, I received a call from Jeh Johnson, the secretary of Homeland Security, who had been a friend since we were federal prosecutors together in Manhattan in the 1980s. He had been in the Oval Office that morning for the briefing.  I have no idea whether he was calling me at President Obama’s suggestion, or if the two even spoke about the matter, but he gave voice to how I viewed the Oval Office eyebrow raise. “Jim, I’m worried about this plan for you to privately brief the president-elect,” he said. “Me, too,” I replied. “Have you ever met Donald Trump?” he asked. “No.” “Jim, please be careful. Be very careful. This may not go well.” I thanked Jeh for the concern and the call. 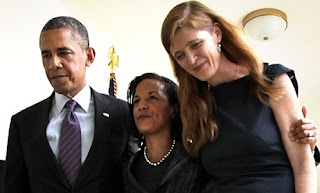 From the information that James Comey has recorded, not of Donald Trump, but of the Obama inner workings, a pattern begins emerging which no one else has exposed. It is the fact that image Obama was not a novice in this as the above intimate photo with Susan Rice reveals.
Obama was asking why he was being told of Russian child whores pissing on his sheets in briefings, for the reason to hide that Susan Rice had discussed all of this previously. Obama knew everything, but Susan Rice has a history of protecting Obama as that was her job.
Obama's inner circle wanted the "golden shower" included, because it was the stuff of such forest fire news, that the public would not pay attention to the other  allegations which did not have any more foundation than the pissing on sheets did.

It was in this, that the Obama circle, having been fed fake intelligence by John Brennan at CIA, and FBI Director James Comey, via MI6 and Mosaad, using Hillary Clinton operatives creating these files, begun with Paul Singer funding this operation for Marco Rubio to become Jeb Bush's VP, that Donald Trump in bogus information was being spoken of as a Manchurian candidate.

Brennan and Comey fed this information to the system, and it became the FBI's Crossfire Hurricane run by Peter Strzok, and when the fake intelligence was set, James Comey went in to entrap Donald Trump in a Comey said Trump said briefing set up.


On Thursday, January 5, 2017, the day before its public release, the intelligence chiefs briefed Obama and his senior staff. White House officials were taken aback. It was “the first time all the pieces came together for us,” one senior official said. “It seemed a much grander conspiracy than it was during the election. This was an intelligence failure and a failure of the imagination.” And when Biden was briefed about intelligence reports on the connections between various players in the Trump orbit and the Kremlin, he had a visceral reaction. “If this is true,” he exclaimed, “it’s treason.”
A few days earlier, Rice had encouraged Clapper during the daily intelligence briefing to tell Obama about the “golden showers” allegation. Obama turned to Rice and said, “Why am I hearing this?” He was incredulous. “What’s happening?” he asked. Rice said the intelligence community had no idea if this story was true but that Obama needed to be aware the allegation was circulating. “You don’t really expect to hear the term ‘golden showers’ in the President Daily Brief,” a participant in this meeting later said, “or that the guy who is going to become president may be a Manchurian candidate.


Susan Rice is key in this. She has always been a willing fellow traveler. She lied to everyone for Obama in Benghazi. She was briefing Obama from the NSA on  the set up of Donald Trump, and in order to keep Obama from being prosecuted in this criminal coup, she emailed herself stating that Obama directed "this to be by the book".

Susan Rice Sent 'Unusual Email' To Herself Moments Before ... 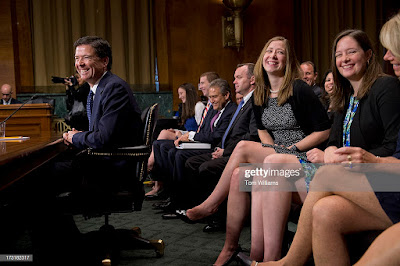 The Inspector General has uncovered the fact that witnesses testified that the entire scheme against Donald Trump was to rattle Trump where he would say something which Comey would "memo" as the only witness, and in that damn Donald Trump for removal of office.
The fact is that James Comey did not come up with the Robert Mueller appointment of Special Prosecutor, but this came from image Obama and his wife's cuddle buddy, George W. Bush, who was best friends with Robert Mueller.
Rod Rosenstein wrote the directive on this Mueller witch hunt. That is what James Comey's interrogation of Donald Trump was designed for, the Director became Prosecutor, and the Prosecutor became Witness for the Prosecution.

This Comey said Trump said is not inadmissible, but is the same legal weight as FBI interrogators nailing people from Scooter Libby to General Michael Flynn for "lying". Whatever James Comey "remembered" would be the legal factual record, and there were no witnesses.


Witnesses interviewed by the OIG also said that they discussed Trump’s potential responses to being told about the “salacious” information, including that Trump might make statements about, or provide information of value to, the pending Russian interference investigation. That FBI counterintelligence investigation, known as “Crossfire Hurricane,” concerned whether individuals associated with the Trump campaign during the 2016 presidential election were coordinating with, or had been unwittingly co-opted by, the Russian government.
Multiple FBI witnesses recalled agreeing ahead of time that Comey should memorialize his meeting with Trump immediately after it occurred. Comey told the OIG that, in his view, it was important for FBI executive managers to be “able to share in [Comey’s] recall of the…salient details of those conversations.”

That is what James Comey's writings reveal in what has been open knowledge in the Obama regime from out of office set up a scheme to sabotage and neutralize the Trump presidency. This Obama Shadow House, was first designed to blackmail Hillary Clinton as President to cover up Obama's crimes. When Hamrod did not succeed in stealing the 2016 AD in the year of our Lord, this house in DC, was transformed into coup central. 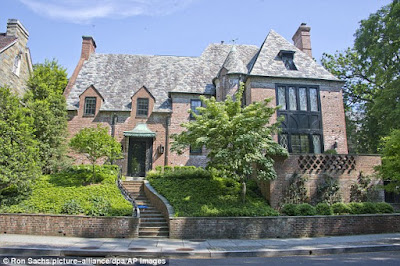 How Obama is scheming to sabotage Trump's presidency

https://nypost.com/2017/02/11/how-obama-is-scheming-to-sabotage-trumps-presidency/
Feb 11, 2017 · And Obama will command them from a bunker less than two miles from the White House. ... Obama will be overseeing it all from a shadow White House located within two miles of Trump. It features a ...

https://www.wnd.com/2017/02/now-democrats-call-obama-shadow-government-the-devil/
"Obama will be overseeing it all from a shadow White House located within two miles of Trump," wrote Sperry. "It features a mansion, which he's fortifying with construction of a tall brick ...

These are the events which James Comey reveals in his writing, he exposes himself bastardizing the FBI and becoming the first Special Prosecutor against Donald Trump and the first Witness. Comey was guided in this by James Clapper, who was joined at the hip with John  Brennan of CIA who ran this coup, and Susan Rice was the buffer to Obama in briefing him and managing the disinformation flow.