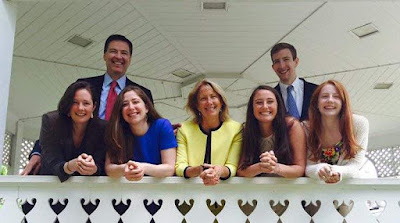 Bad girls bending at the waist...

The coming Impeachment Trial Theater in the United States Senate was previewed by for former US Attorney Rudy Guilliani, and now the President's personal attorney, as the principles in this came into the spotlight, namely:

The US Second District of New York

What the Lame Cherry again directs you to remember, is that President Donald Trump, I/R, initiated this operation deliberately. As soon as protector of America, Robert Mueller, cleared the President of the Pissgate frame up, the CTRT, the Committee To ReElect Trump, needed to engage in the second phase of this, in order to directly link this to the conspirators, and that meant a scripted phone call (The President has confirmed this Lame Cherry exclusive), in order to bring his impeachment to run against, and secondly, to produce a Senate trial, where there will be witnesses, and they will not be against Donald Trump, BECAUSE THEIR  TESTIMONY HAS ALREADY BEEN RECORDED BY DEMOCRATS IN THE HOUSE AND REFUTED, but the witnesses are going to be for Donald Trump, and they are going to be about Soros, SDNY and Maurene Comey.

Rudy Giuliani has uncovered a massive money laundering pipeline out of Ukraine in 2012 (Remember this was what Paul Manafort was charged with, and it took place after Manafort left the situation and it was picked up by Hunter Biden, son of Vice President Joe Biden.) and directly into democratic coffers, all under the consent of Barack Hussein Obama.

This should register with all of you what is taking place. This blog informed you that Donald Trump was the bait, and now he is dragging the creatures of hell out into the light.


Giuliani said the corruption in Ukraine most likely started in 2012 during the Obama administration and involved at least two major schemes, one for $7.5 billion and another for $5 billion.
He backed his claims with bank and court records that show a million-dollar money trail leading from Ukraine to a fake company in Latvia, then to Cyprus, and finally to the board members of Burisma, the Ukrainian natural gas firm whose board included Hunter Biden and business partner Devon Archer.
“I’m in a lot of trouble,” Giuliani told Glenn. “I’ve uncovered an eight-year-long money laundering system, that started probably in 2012, with $7.5 billion laundered by Yanukovych, the president at the time — pro-Russian president at the time. He laundered through American institutions, interestingly, controlled by Democrats.”


The President though has problems, deep state problems, and they center around the authoritarian city state of the Second District of New York, where future police state minders are implanted to keep absolute control. The most prominent political embryonic is Maureen Comey, a deputy US Attorney, hired for SDNY in 2015 by Barack Obama, just as her father James Comey was exonerating the crimes of Hillary Clinton, and in continued presence, the Director of the FBI was not briefing Congress on the spying on Donald Trump, and then the Director took the next step in framing innocent Trump associates like General Michael Flynn and Carter Page, in order to bring about the appointing of Comey's mentor, Robert Mueller to get Donald Trump.

In all of the Ruth Bader Ginsburg demands for recusal, for Attorney General Jeff Sessions recusing himself from Trump investigative oversight, for some reason Maureen Comey has not recused herself from any and all cases which are the political hotbed of Obama Crimes, Clinton Crimes and Trump Entrapment.

There is a serious problem in the US SDNY, as this photo shows James Comey's "christian" wife, posing with her recently appointed US Deputy Attorney Daughter, at the PussyHat protest against Donald Trump. If you notice on her shirt, are Hillary Clinton, Ruth Bader Ginsburg, Elizabeth Warren, abortionists, sodomites and abominations to God.
While Donald Trump is not God, the SDNY is employing Resistance anarchists, not only who hate Donald Trump, are working to destroy him, but are the offspring of James Comey. 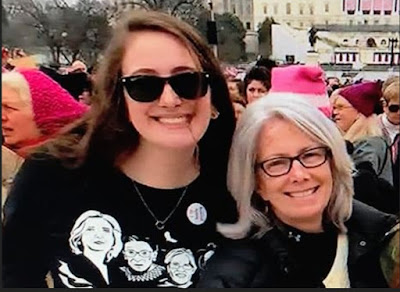 As for James Comey, Giuliani mentioned him to lash out at the former FBI director’s daughter, Maurene Comey, who is a New York federal prosecutor at the SDNY: “They’re all — they’re all knee-jerk, now logically impaired anti-Trump people, including James Comey’s daughter, who works there. You don’t think she’s bitter? … I consider her father a disgrace. I’m embarrassed that I hired him. Never seen anyone run the FBI like that.”

Maureen Comey becomes a legal nightmare, as her office has been grabbing cases, from Paul Manafort to Jeffrey Epstein. To add to the legal jeopardy, Robert Mueller handed off Trump's campaign finance issues to SDNY, and they in turn brought down Michael Cohen, Trump's personal attorney, with the added jeopardy, that out of the blue, suddenly the FBI for the SDNY appeared in Florida, and began indicting Ukrainian associates of Rudy Giuliani for undo influence.

Rudy Giuliani begins to explore criminal connections of Ukraine and Joe Biden running for President, and suddenly the FBI from New York sweep into Florida, and arrest Ukrainians. That appears to be another literally political smear against Donald Trump in another presidential election. The first was James Comey and the second is now intimidation from the office that Maureen Comey was employed in by Barack Hussein Obama as she parades around in Hillary Clinton shirts protesting Donald Trump.

I reported exclusively:
Two Federal Bureau of Investigation (FBI) agents recently showed up to question a businessperson in another state about his/her brother’s possible donations to the Republican National Committee during the President Donald Trump campaign.
The two special agents showed up in an FBI car with yellow New York plates in this faraway state, meaning that the New York office is handling this operation without farming it out to local agents. The license plate of the FBI car was HMV8617, and the agents showed up at 7 AM. James Comey’s daughter Maurene is an Assistant U.S. Attorney in the Southern District of New York, the virulently anti-Trump office previously led by Preet Bharara.


Why on earth the US Attorney in New York has not reprimanded, recused and reassigned Maurene Comey to a district which is not involved in cases against the President and more to the point, are cases which are going to face automatic appeals for bias and prejudice, is taints the current US Attorney's Office in New York.
It simply baffles the mind why an adult child, would taint her father as FBI Director and the entire agency, while they are investigating the President, while posing for PussyHat photos is beyond comprehension, as it is not professional and it is the stuff people are fired over, as this all leads into the Impeachment and Trial of a sitting President.

https://news.yahoo.com/wsj-two-foreign-born-trump-144414314.html
Oct 10, 2019Two foreign-born Trump supporters who were clients of Rudy Giuliani and helped connect Giuliani with Ukrainian officials as he sought an investigation of Joe and Hunter Biden were arrested late Wednesday and charged with campaign-finance violations.Lev Parnas and Igor Fruman, the Florida businessmen

This is  one of the issues of the Senate Trial. There was illegal activity by the FBI against Donald Trump by Director James Comey who was not exonerated by Inspector General Horowitz. Added to this, Jeffrey Epstein was murdered in custody of federal officers, and it will be the SDNY which is waiting to prosecute Donald Trump on the fiction of "tax problems" in the next step in this.

How can any investigation with a connection to Donald Trump not have any defense attorney demanding the Judge examine if any conversations ever took place between Maurene Comey and the other attorneys? Did she discuss her anti Trump position? Did the prosecutors like her, and therefore were biased because Donald Trump fired her father from the FBI?

The words of Rudy Giuliani indicate he is going to name George Soros terrorism, associated with Ukraine and the United States, Joe Biden's bribes from Ukraine, and as a trump card against the federal office in New York, the reality that Maurene Comey's mere presence has destroyed that offices legal credibility.


How two supposedly christian parents in the Comey's could rear such an absolutely self destructive girl who cared not for her father's position at FBI and was so self driven that for the good of the Department of Justice she did not recuse herself and ask to be reassigned to another district, mirrors a great deal of her messianic father, who discerned Hillary Clinton being a crook was not being a crook, because she did not mean to be a crook.

Let the Senate Trial begin, and into this, let Rudy Giuliani ask the one question without answer, but will ring in the minds of American voters, "How much of a bribe was it to James Comey when Barack Obama hired Comey's daughter to the New York US Attorney's office, for Comey to frame Donald Trump, and for Maurene Comey to use the New York office to continue to go after an innocent President Donald Trump?"

As you are not aware of this, the Senate holds a trial, but IT IS NOT A COURT OF LAW. The President can say or have said all sorts of things and there is not a Judge to wipe the record or demand the Jury to ignore that evidence.

The question in this is, "Why has Barack Obama not been indicted for bribing James Comey in hiring his daughter as a deputy US Attorney for Comey to cover up Hillary Clinton's crimes, ignore Obama's corruption and frame Donald Trump?" 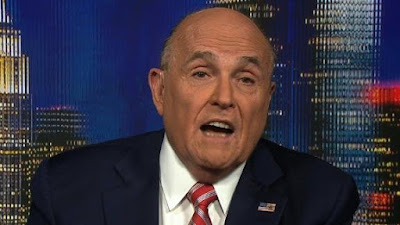 
The cabal that brought America, George Soros terrorism James Comey complicity and the Southern District of New York abuse of power, is after Attorney General William Barr who is in the process of exposing the corruption and the criminals.

Former federal prosecutor Michael J. Stern appears to be on the same page as Akerman. Also speaking to Newsweek, Stern suggested that Barr is loyal to the White House — a “perversion” of his duty at the Department of Justice.

Former Attorney General Eric Holder, who served in Barack Obama’s administration, recently attacked Barr as “unfit” for this current position. Holder made the accusation in an op-ed in which he took aim at Barr’s recent public statements, which he said were “so plainly ideological, so nakedly partisan and so deeply inappropriate” for a person in his position to make.


Former political minders and current cabal members are parroting the attacks on the Attorney General, this is the reason the US Senate is the place Donald Trump will bring this corruption before the American People.
It is why Nancy Pelosi hesitated in delivering Articles of Impeachment. They are aware of what is coming and having started impeachment, it is now their albatross.