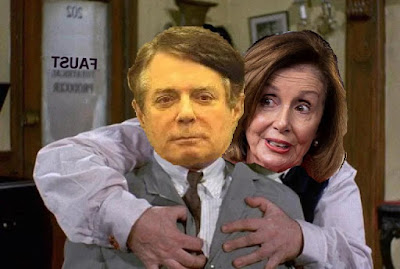 
Now that the Judiciary in New York State has begun to rectify the draconian over reaches of the leftist Attorney General and the political minders in law enforcement, in ruling that Paul Manafort and every American coming under the scrutiny of New York does have rights and those rights will be protected in New York does not have the right to shoot Paul Manafort in the foot after the federal regime hangs him, it is in this impeachment season that the Lame Cherry calls upon President Donald Trump to have "some goodwill toward men" as Christ did, and pardon Paul Manafort.


The highly dubious effort was led by New York state attorney general Letitia James and, thankfully, it has failed. The New York courts are not nearly as dismissive of individual rights. The state charges were thrown out today on the basis of double jeopardy. The question is now whether this will be a prelude to a presidential pardon.


Mr. Manafort is a man whose guilt was exonerated by Robert Mueller's FBI in the President George W. Bush years, because it is not a crime to invest money from Ukraine, report it to the United States Goverment, and not hide the transactions.

There arose though a conspiracy in John Kasich of Ohio, who hired all the campaign managers in the GOP, to force Paul Manafort to be chosen by Donald Trump for his manager. This then set off the framing of Donald Trump and the digging up the 10 year old files on Paul Manafort, which were baseless, but twisted into smearing him and a conviction.

Mr. Manafort, a non violent man, was then this past summer, almost "homicided" in New York, by being taken out of a minimum security facility and transferred into a venue where he would have been murdered by the inmates.
Someone wanted Paul Manafort dead as Jeffrey Epstein to silence him. Thankfully Attorney General William Barr saved Mr. Manafort's life.

This past week Mr. Manafort suffered heart failure in prison and had to be transferred to medical care to save his life.. Mr. Manafort is an old man, moved by wheelchair, and in the attempts on his life, and now the Judiciary in New York protecting Mr. Manafort, it is time this Bob Dole loyalist, receive a full pardon from President Donald Trump in this season of Christmas.

The fact is Paul Manafort is in prison, because people dislike Donald Trump. The Justice system is not built so people can be thrown into prison, just because some political minder hates your boss. Mr. Manafort has suffered as much as Carter Page in smears. It is a matter that Paul Manafort is in prison for engaging in 1 Billionth of what Bill and Hillary Clinton did in moving money around for their cronies. The Clintons are free, plotting to run in 2020, and in that Paul Manafort deserves to be free, to enjoy what is left of his life which has not been destroyed by the same US inJustice system which still has democrat Cyrus Vance jr. of New York digging around in Donald Trump's tax records, not because Donald Trump did anything wrong, because the Auditors of New York would have found that as much as the IRS decades ago, but because New York is a system which decides it can dispatch Homeland on wild goose chases for things in a blog to intimidate that blogger, New York is a place where Jeffrey Epstein ends up dead, New York is a place where they think they can violate Donald Trump's privacy on fishing expeditions and New York is the place which tried to homicide Paul Manafort.
There is not another jurisdiction so out of control as the New York State and Federal.

There are those who would say that with Mr. Trump impeached, that it would not be wise to rock the boat for Mr. Trump. Mr. Trump has pardoned Jew slave traders in Iowa and Black sex perverts, there is not any problem with pardoning an old man in a wheelchair that New York has been trying to murder for the past year.

There is always the caveat from the liberals like Jonathan Turley, that they don't like Paul Manafort. Liking someone has nothing to do with any of this in pardons or the law. There is right and wrong, and Paul Manafort has been treated horrifically by a nation he served for years.
Cutting to the bone on this in facts, Paul Manafort really was not tried because liberals hated Donald Trump. Paul Manafort was convicted because a global rapist named George Soros lusted after Crimean oil, that Russians in Ukraine voted to Russia when they returned to the Federation by vote. Paul Manafort accepted a few million dollars from Ukrainians at odds with George Soros to invest in America, and like the old mafia, they were not going to stand for it.
Katherine Austin Fitts reports that this group stole 21 trillion dollars from Americans these past years, and they are furious over the few pennies that Paul Manafort invested after notifying the US Government first.

So President Donald Trump, will you do what is right? There are a number of people who should be returned to their shattered families. Rod Blagojevich should have been pardoned long ago. Yori Kahl who never should have been in prison should be returned to his family. Paul Manafort belongs home for Christmas.
It is time that this President take up the cause Slavics in America, the Germanic settlers in America and the political scapegoats in America as represented by these three innocent Americans.

It is time to pardon them.