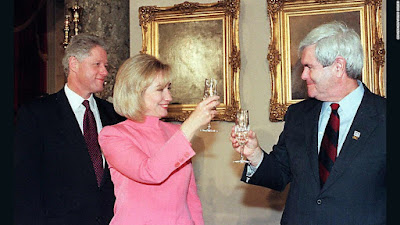 They serve better cocktails at the FBI spy meetings...

As US Attorney John Durham, begins the investigation of CIA Director John Brennan, for perjury in lying to Congress that the "Crown Documents" or the British MI6 Michael Steele frame of Donald Trump were to be included in the FISA Warrants, as communicated by Brennan to FBI Director James Comey, there is a most disturbing feature in this, as Director Comey attempted to blame what took place in spying on Donald Trump, that it was specialists not reading their designated reports. a reality has appeared of an Obama FBI out of control, just as the DOJ, CIA, State, IRS were all out of control.

If one dissects what the Inspector General reported in actual admissions from FBI agents, THERE WERE TWO TEAMS SHADOWING DONALD TRUMP.

There appears to be at least three original CHS or Confidential Human Source spying on Donald Trump. This is a finite group of people who were part of the Trump campaign at this stage, and the reality is, like a Aryan Nations meeting, there were more FBI agents and informants there, than Ayrans, and Donald Trump had more FBI assets shadowing him, than working for him.

Several means at least three if not more. The point in this is Barack Obama was covering up Russian manipulations in the 2016 elections, so Donald Trump could not later claim that Hillary Clinton was being helped by Russians to win the White House, and into this, THERE WERE ALREADY FBI SURVEILLANCE of Donald Trump. They had literally infiltrated the Trump campaign, before the MI6 Pissgate Dossier had manifested, by John McCain and John Podesta back to the FBI's desk of James Comey.

What you will read in the IG quotes below is even more alarming, because Peter Strzok in this prelude had been dispatched to London to speak with the British and the Australian Ambassador who was working for Hillary Clinton. From this meeting began the FBI's Crossfire Hurricane investigation of Donald Trump.

One of the Confidential Human Sources at this point, passed along the names of four Trump staff in Carter Page (who himself was a CHS for the FBI), Paul Manafort, General Michael Flynn and George Papadopolous.
Stefan Halper a Bush / Clinton spy, is the one who framed George Papadopolous and was planting false Russian connection stories.

From the original spy group, Peter Strzok in his counter intelligence group, then assigned several more informants to spy on Page, Manafort, Flynn and Papadopolous.

As an information point in this, CHS's are PAID. The most notable case of a paid CHS was the radiohead spokesman for the Ayrans, his salary was around 60,000 dollars a year. The FBI does not pay you that kind of salary, unless you produce. The people around Donald Trump who were CHS's were all established sources who produced information, and in the case of Donald Trump as Robert Mueller proved, the FBI CHS's were forwarding information to Peter Strzok which was false.

In reading the hate filled texts of Peter Strzok to Lisa Page, Strzok was a skilled investigator, and he had assessed this investigation correctly in there was nothing to be found on Donald Trump.


The IG wrote:
“We also identified several individuals who had either a connection to candidate Trump or a role in the Trump campaign, and were also FBI CHSs, but who were not tasked as part of the Crossfire Hurricane investigation.”
“One such CHS did provide the Crossfire Hurricane team with general information about Crossfire Hurricane subjects Page and Manafort, but we found that this CHS had no further involvement in the investigation.”
That was a reference to Carter Page, an adviser whom the FBI wiretapped for a year, and former campaign manager Paul Manafort.
Crossfire picked them, and two other Trump associates, retired Lt. Gen. Michael Flynn and former adviser George Papadopoulos, as subjects to investigate in August 2016.
The Horowitz report said Crossfire agents assigned “several” informants to all four subjects.
The most notable CHS was Stefan Halper, a professor at Cambridge University in the UK who ingratiated himself to Mr. Page and Papadopoulos.

Still Barack Obama, Susan Rice, John Brennan and James Comey progressed the spying on Donald Trump, not for security reasons, but because the Obama group's agenda was to so overwhelm Donald Trump in his administration, to keep Donald Trump from dismantling the Obama communist overthrow of the United States.

The question in this is which no one has answered is, does the FBI make a practice of infiltrating every presidential campaign, Republican and Democrat in spying on them. The next question is then, is the FBI gathering information on future leaders of America as J Edgar Hoover did, in order to blackmail them for their benefit, or for the interests that James Comey, Andrew McCabe, James Baker serve, as these are powerful people who are behind this, as Bruce Ohr is still working at FBI with his security clearance, as Director Christopher Wray has not fired this known associate of Fusion GPS where his wife worked, in the framing of Donald Trump.

The fact is Donald Trump was treated like Hutatree, and as the BATFE bragged, they had CHS's monitoring all the hundreds of groups in America.

There are numerous troubling things in this, like how many times in life has CHS's made contact with this blog or any of you. What is troubling in this instance with Donald Trump is that the Obama appointed Inspector General, did not find anything alarming about this spying.

One has to understand the Inspector General is not like a Peter Strzok in investigating or like the FBI Agents who entrapped Michael Flynn. The IG is more like the mother of a Black rapist on trial for murder of a dozen women, and the mother believes everything her boy says.
That is what the IG does. He asks questions about improper activities, and the people he asks, always answer, "Gee I was just emotional and I never meant to break the law". Try that with a Highway Patrol and you still get a ticket, with the IG, these types get exonerated.

Even when the IG recommends prosecution, the second layer at the Department of Justice has weighed in with "This Agent did not mean to break the law and was just meaning to do a good job".

It is obvious by now, that the entire law enforcement system in America is broken. I do not care how much of a crook Hillary Clinton is, as a Christian Conservative who would never vote for her, I do not want the FBI spying on her and infiltrating her campaign. If there is a crime, then investigate that, as there is no room for paid informants producing information based on their paychecks.

The psychological disconnect in this is that Attorney General William Barr understands what took place was criminal and that is was spying, but the FBI under Director Wray is more interested in protecting itself than Americans from this again. It is evident the Inspector General understands what an investigation is, but those investigating political campaigns from the FBI should not be engaged in this activity.

Disturbingly some of the people we know and trust as advisers are FBI paid informants, who even with all their money, will say anything and do anything to stay on the payroll in framing innocent people.

The psychological tests produced to generate only a certain law enforcement type, has produced an extension of these types, hire people who have a pattern of manufacturing evidence in order to keep their relationship with law enforcement.

The only solution in this, and there must be a mandated solution, is a competitive agency review of each other, and that includes reviews of these CHS's, as for the record, CHS's stampeded the Bundy protestors, and literally got LaVoy Finnicum murdered.
All of this review, must then be reviewed and signed off on by the Republican and Democrat Intelligence Committee members, the Attorney General and 3 Federal Judges, with the reality that if anything ever appears like Malheur, Hutatree or Trump, those who signed off on this oversight will be prosecuted.