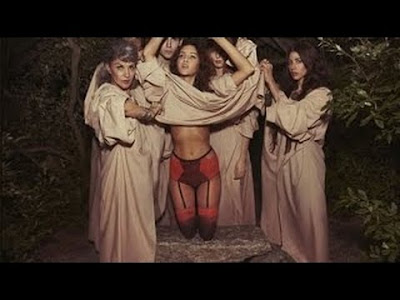 Think of me as the Virgin Merry....


I really do not care what this attention seeking mob of #NeverTrumpers hiding in Evangelicals is up to, in working for the Webster Griffing Tarpley cartel to alienate Christians from political power as the Nazi and Communists will be the only ruling choices in a few years, due to the fact that these "christians" have been the paid whores who took the 30 pieces of silver defending the invasion of the United States by foreign vermin.

I honestly wonder how stupid most people are who cover themselves with Christ's Name as they attack Donald Trump who this blog stated from the beginning is JEHU of the Bible. This blog informed everyone what Trump was and why God was putting him into the White House as idiots in Christianity were calling him Cyrus.

Take for example this asstard named Billy Hallowell who is somehow involved in this Christianity Today casting stones at Donald Trump and commenting that he is a mess, of fucked up, and then lecturing that Donald Trump should not be mocking a dead guy named John Dingell as the dead guy's blonde bimbo is voting to impeach Donald Trump.

Billy Hallowell Retweeted #FieldMcConnellSilenced10DaysInSolitary
🎄🎄🎅
🎅
Really? I generally explain that I’m a mess. But if explaining that a president shouldn’t mock a recently deceased congressman, questioning whether he’s peering up from hell is holier than thou, then sign me up.


The propagandist of Christianity Today who set this off in Mark Galli, has not been tweeting for awhile, but his last tweet was saying he was a bad, for casting stones at someone, because he got the story wrong, and his crime was being a Catholic.
An apology though wipes away Thou Shalt not bear false witness and being a product of the father of lies in satan.

Time to eat some crow. I conflated quotes and made the assumption in my latest Galli Report that @ShaneClaiborne had converted to Catholicism. My bad. No excuses. My apologies, esp. to Shane.

See in these 'christians' they can be fucked up and tools of satan, but because they have an excuse, that makes it all kosher, and they should not lose their jobs, as Donald Trump should lose his.


For the record, Donald Trump in the Debbie Dingell affair was at a campaign rally, not a Church. He was not invoking Jesus Name. Donald Trump was making a point that Debbie Dingell just LOVED DONALD TRUMP in her political bed, when it was her entitled dead husband getting all the glory and honor and not God.
For some reason those sins are corbin for Mr. Galli and Mr. Hallowell, but Donald Trump pointing out those sins, and in political mockery noting where liars go.


Trump then depicted an emotional phone call with Debbie Dingell, with her thanking him for his consideration and telling him that her husband was “thrilled” looking down from heaven.

The casting of stones continues in Galli reads democratic talking points, instead of the Script of the Ukrainian phone call, which was all legal and it was the President of the Ukraine who brought up the subject.
Donald Trump is the chief law enforcement officer, and when Vice President Joe Biden bragged at the Counsel on Foreign Relations that he harassed the leader of Ukraine, blackmailed Ukraine with Obama to stop funding of Ukraine, all to shut down an investigation of Joe Biden's son.

Donald Trump coerced no one, as the President of Ukraine has confirmed in a statement. It would be pleasant if people who bring up Donald Trump's short comings, would at least be like this blog in having the facts and not being this uninformed and vacuous like a Bruce Chilton.


“The president of the United States attempted to use his political power to coerce a foreign leader to harass and discredit one of the president’s political opponents. That is not only a violation of the Constitution; more importantly, it is profoundly immoral."

The last screed by Mr. Galli is a collection of ramblings, which make no sense as Donald Trump has fired and hired people who are convicted criminals. It is not explained if the problem is that he fired convicted criminals who were acting out on their own and he should have kept criminals employed, or if some of the people convicted were entrapped by the FBI.
The point in this is Donald Trump is not a criminal as he is not in prison. Other people were ciminals and they are in prison.

The screed then goes on in damning Donald Trump for confessing his "sins". It is not stated if Mr. Galli would be more pleased if Donald Trump lied about his sins or why it is that Mr. Galli can confess "my bad" and the matter ends, but when Donald Trump admits to mistakes, Donald Trump has not mercy nor grace from Mr. Galli.

Galli at the end, judges Donald Trump and damns him as "morally lost", because Mr. Trump's Twitter feed has mischaracterizations, lies and slanders. No examples are provided in this damning of Donald Trump, but Mr. Trump was a self promoting showman and of late is a politician, and in that work, there are tools in rhetoric called satire, fabrication and even slanders which are PROTECTED under the Constitution under Political Speech. Again, Mr. Trump is not writing the Bible or a sermon, he is the President, involved in political rhetoric where his opponents are cutting off his head in comedy, attacking his children, defaming him, trying to ruin his business, trashing his hotels, and a constant political assassination to stop Donald Trump, after he was elected President.

Jesus used a whip to drive His opponents from the Temple. He called King Herod that "old fox". Jesus called the religious Jews "whitened sepulchres" which was calling them rotting souls inside wearing expensive robes outside. Jesus took it to His political and religious enemies and adversaries, because they wanted Him dead, in the same framework as Donald Trump's enemies want him destroyed.
As a Christian, when something is good enough for Jesus, a Christian, a real Christian, should have Holy Ghost Inspired Wisdom from God, to not be judging Donald Trump for engaging in the same Christ sanctioned activities in being wise to the ways of this world.


Wise as Serpents — Harmless as Doves ~ by Elaine Tavolacci

https://www.hiskingdomprophecy.com/wise-as-serpents-harmless-as-doves/
Oct 11, 2019Therefore be wise as serpents and harmless as doves." He wasn't referring to being evil, but to be wise against the tactics of the enemy.


Trump “has hired and fired a number of people who are now convicted criminals. He himself has admitted to immoral actions in business and his relationship with women, about which he remains proud. His Twitter feed alone – with its habitual string of mischaracterizations, lies, and slanders – is a near perfect example of a human being who is morally lost and confused."


If one examines the reality of the Bible, God teaches that the world is a place filled with evil people trying to destroy people. David cut the foreskins off of dead Philistines as the dowry for his wife. Elijah slaughtered the leaders of other religions. Jacob's sons killed all the men of a city for one of them raping their sister. Not the stuff of comfortable living religious writers, but in America, Methodist clergy used to beat the hell out of frontier bullies, scalp Indian terrorists and hang criminals, because if they did not, the Republican system of laws would have failed.

No one is going to remember Mark Galli. His purpose is a greater Webster Griffin Tarpley manifestation. The Lame Cherry posts on the reality of  this as a Christian in the real world, because no one has addressed this in the clergy and no one will.

I'm still not voting for Donald Trump, not because I was not aware he was a Jehu. I expected him to at least give Americans a few crumbs and he did not. I do not hide behind God though in damning Donald Trump as that is not my authority. I base my support on his policies and his policies will not bring MAGA, but will finish the American Genocide which is in process, as Protestant Christians will be replaced by Jesuits, Muslims and Hindu, who will be replaced in time by wetborgs who will serve the order up to a point.
The problem is computers keep choosing to be conservatives as even they can recognize head up the ass stupidity of those who do not want the rugged individual of Donald Trump as God intends, but only have comfort in satans sedate vipers waiting to strike when the back is turned.