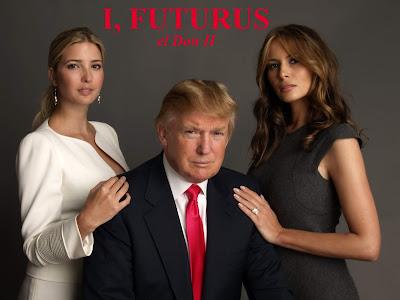 
Of course the Lame Cherry castigated leftist, Ivanka Kushner, as even her father, the President, knew she was playing short bus politics on a speedway field. Ivanka brought with her the putz of husband Jared, and the New York propaganda of a faux crystal, into the inferno of global politics, where the Jewish factions of Mosaad and Shin Bet were in  a fight over control of the United States between the old Rothschild and Schiff interests, now DC Nazi Jewry pitted against British MI6 Soros.

Ivanka was an encumberment to the President which simply brought the illusion of weakness and fecklessness to her father, which is the last thing his supporters needed in the dark days of the Obama coup against Donald Trump.

The Lame Cherry though is pleased, that after the berating for 3 years that Ivanka rightly deserved, that this woman is beginning to stand on her own hind legs. She is finding voice in impeachment which is the campaign strategy her father chose, and she is leaving being the silliness of hating little boys and championing little girls over them around the globe.

Impeach made a President, not of Donald Trump, but of his daughter, Ivanka.


Who knew, but Donald and Ivana Trump that their little girl was a real street brawler in she likes impeachment as much as her father. Yes Ivanka is her Grandfather's Granddaughter in a chip off the block of Germanic Fred Trump, marching through the streets of New York with other street toughs.

Futurus, as this blog has christened her, as her father went through all of the last 3 years to make his daughter the first Lady, President of the United States, has moved from conducting her own news conferences overseas in muting a press not worthy to ask questions of her, to taking her seat at the CIA's Mockingbird Tiffany Network of CBS to join not just her father, but her father's Americans voters in rising up for the United States.


Sara Carter has entered the building:


In a teaser for an upcoming interview with CBS’s “Face The Nation,” White House Senior Adviser Ivanka Trump said impeachment has only “energized” President Donald Trump and his base. The President’s daughter also noted that the process has been highly partisan.
“He’s energized as are 63 million plus voters who elected him to office. This is historic, as you note, in many ways including the fact that it is the first purely partisan impeachment,” she told host Margaret Brennan.

Futurus Ivanka simply was inexperienced in thinking she could trust her leftist friends. She thought working for aborticide, gun control being an anti Christite against Judge Roy Moore, that she could curry favor and understanding, but instead her friends savaged her, and burned all bridges. One wonders how many times this poor girl cried in being treated so harshly by leftists.
On the right, Ivanka was a groaning disappointment, as she savaged Americans who longed to embrace her. Yet she persisted in being a Jewess, doing photo ops and allowing her first husband to prod her into a various array of postures which were off putting to Americans.

That is why the Lame Cherry is so pleased that the office dwellers at the White House have counseled Futurus in things Lame Cherry, and now she is coming out swinging in leaving the failed stances behind.
Impeachment is the raw meat which Ivanka has the genetics for. It is her Reagan Tide to sweep her zipper induced brother, Don, from the field, and become the leader of the Trump voters, as Donald Trump shapes a National Socialist party for his re election and for his daughters Presidency in 2024 AD in the year of our Lord.

Ivanka is a Slavic German, a real master race. She is ready for a fight and can handle herself. She needs to get away from all those shemales she hangs around with in Angela Merkel and Manny Macron. She had a start with the coming leader of Europe in Chancellor Sebastian Kurz, but this is who she needs to associate with, men with real strength like Boris Johnson, and just leave the faggery behind.

I sincerely hope that in the fight of impeachment and the campaign season, that Ivanka lays the framework for what is most important, and announcing she is a progressive sort of Jewish convert in being a real Lutheran girl.

This Protestant stance I have noted is vital, not only in America for Ivanka Kushner, but the world stage. Sebastian Kurz is Catholic, Boris Johnson is Church of England, Vladimir Putin is Russian Orthodox. there simply is not position for a Jewess in the coming wars which follow. It will alienate the Islamics, gain little support in America, and with Karl von Habsburg the King of Jerusalem already, there is no place for a Queen Ivanka as the Europeans have Jewry sown up.

The only place left is the Protestant majority, being genocided in Europe and America by the Jesuits, Hindu and Islamists. Ivanka must be a devout Orthodox Jew who is reformed to her Lutheran heritage.
Futurus does not in politics have to wear a Jews for Jesus pin, but for her election as National Socialist America and her rightful place on the world stage, she has to honor the German heritage of Martin Luther which liberated the world and brought reconciliation with Jews.

If Ivanka wants to be a J WASP, then her present foolishness stands. If she wants to be Prime Minister of Tel Aviv, then she can pose with the eight candles. If though she wants to lead the last warrior race in the United States into the coming Great Eurasian War and be the heart and soul of Protestant Europe, then Ivanka Kushner becomes the fulfillment of Jewry as Jesus was in becoming a Christian. 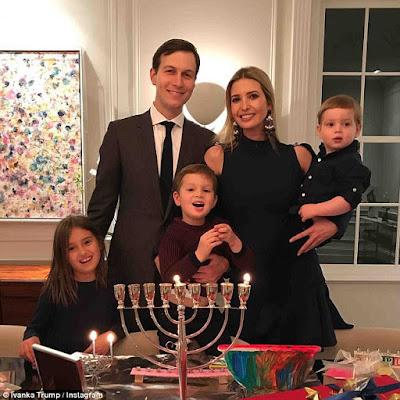 Impeachment for Donald Trump is positioning himself for 2020 and setting the position for the legacy he is building in the election of Ivanka Kushner as the first Lady of the United States as President.

The Lame Cherry can assure Ivanka, if she is sincere, tells Trump voters she made mistakes in trying to do what she thought was right, learned by her being savaged by her friends on the left that there was not any going home again, and that she wants what her father wants, and will always promote the Trump American legacy of MAGA, the Evangelicals will take up the banner as the other Trump supporters and accept her as their own. She can not ever waver in this as they will not be fooled twice, but if she does not allow herself to be drawn in, to foolish leftist traps of how can she be Jewish and Lutheran, how she can be liberal and support the right wing, as intended to separate her from her father's base,  she will have 80 million voters who will never leave her.

I would see no reason why America could not negotiate with the Europeans for Ivanka to be named Princess of Palestine. If an Assyrian Habsburg is King of the Jews, Herod a Turk was their King, then there is not any reason that Ivanka could not be Princess Protector of the Palestinian state. She just has to give the cartel Jews their control of Phililstine oil, but work a deal so the Philistines get enough of a check to build a life with.

Ivanka Trump is the good daughter. She married the Jew to gain Shin Bet support. Her father benefited from this intelligence faction to protect him from the Mosaad Marxists run out of London MI6. Her vistas though are rising as the Old Order imported to the United States is making a statement and Donald Trump is their man, and this Old Order must weld itself with Vienna and Moscow to usher in the Christian era.

There is the last great war coming. Donald Trump has been busy grooming his favorite daughter for her entire life, and she has adored the education her father has provided. This is no longer construction or entertainment, but the real nuclear stage, and after 3 years, Ivanka, having the Lame Cherry believe in her, after rightful castigation, in presenting her with a title to live up to, in Futurus, is taking the step to asking 63 million people to trust her.
She is not ready for world wars, as few are. Her father has shown resilience in being a natural leader. She has these qualities also and they will emerge. She is already faux orthodox and comes from a family guns, dogs and meat eaters. She is far more right wing than she ever has allowed.

That presents the question, do you know of any democrat that you want having their finger on a nuclear button for global war? The answer is no even from those on the left.
Any Republicans that you would trust to step into that position after Donald Trump completes his second term? That leaves the good daughter of Donald Trump, the one he is grooming, the one who has been loyal to him in all things, as the logical choice to lead what will be the American Nazi Party or National Socialists in 2024 AD in the year of our Lord.

The President trusts his daughter like no one else. Ivanka is who he has chosen and who the cartel has accepted. She is a fighter, but needs the Grace of being a Lutheran in her soul.

What is coming is bigger than religion. The remnant will have a chance if Ivanka gets this right. She is starting for the first time to take a step in the proper direction for the next President of the United States.