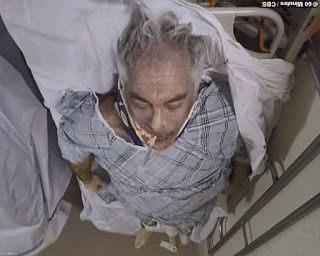 
It is always interesting when such a trustworthy protector of America, in Attorney General William Barr, announces that Jeffrey Epstein was killed by his own hand in suicide.

The interest is, that we know that the guards were gone, Epstein was left alone, and everything about this case indicates that some group wanted Epstein silenced for his pedo blackmail ring run by Mosaad and known the CIA.

Epstein was to be a featured key in the re election of Donald Trump, by those who originally backed Donald Trump in 2016 AD in the year of our Lord. Epstein would have opened the case file to all things to run against what democrats were offering.

Then he was gone and the state, under the jurisdiction of the infamous South District New York ruled it all suicide.

'Going over a thousand jail hangings, suicides in the New York City state prisons over the past 40–50 years, no one had three fractures.'
Dr Baden said the injuries on his body also showed contusions on both wrists, muscle hemorrhaging in his left shoulder and an abrasion of his left arm.
Epstein also had a cut on his lip and burst capillaries on his face, mouth and eyes, according to the autopsy.
The handwritten note found in Epstein's cell, which was found alongside a ball point pen, contained complaints he seemingly had about prison conditions.


As the above quote reveals and will be expanded upon, in hanging or strangulation, there is bruising and sometimes broken bones. In the type of death that Jeffrey Epstein engaged in, the purpose of bed sheet ropes is not to jump off a top bed, and break bones as the 3rd vertebrae is the feature in state executions, but to instead strangle, as in twisting the bed sheet to cut off air, and the person then suffocates, passes out, and with the rope restrictions, the person can not gain another breath. 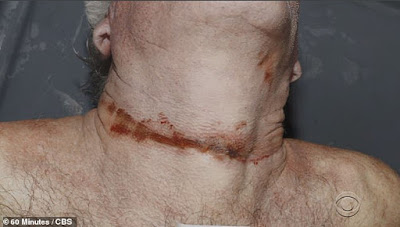 Twisting ropes so tight that bones break, produces the result of Jeffrey Epstein stopping. If Epstein, knelt and jumped, twisting the rope would have no purpose, and in effect hinder, as while it would suffocate, a fall to break the neck requires distance and speed. The reason a hanging scaffold is 10 feet off the ground is people have to drop 6 feet to break a neck. Prison beds are not 10 feet off the floor.

What is quoted above from New York State Prisons is the wrists were restrained, meaning Epstein was restrained by others. The bruised muscle and shoulder reveal Epstein was pinned down, and then the bed sheet was placed around his neck, twisted with force to break the multiple bones in the neck, at which Epstein expired.

Burst lip, vessels on the face, mouth and eyes, are from pressure, not from a leap off a top bunk bed and breaking a neck. Pressure is caused by pinning Epstein down and then with rope tightened around the neck, raise blood pressure and causes these ruptures.

The suicide note is not a note of suicide, but a note of complaints of a man who expected to live, and was stating abuses in the system, to improve his life, not end it. 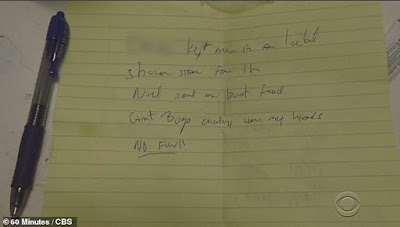 Two correction officers have been charged with falsifying prison records on the night Epstein died.

The 60 Minutes story like all things Trump, has New York as the center, and two factions fighting over something, and using the media to make the public aware enough, to make those who have engaged in coups and murders, uncomfortable enough for leverage.

There were numerous bedsheet knots and ropes constructed and laying around the cell.  That type of repetition,  indicates the individual doing this, enjoyed this very much. Think of it as foreplay before sex, an obsession with a fine wine, before an opera, the stalking before the kill.
This was a professional, finite in employers, and rather unique.

Employers who employ such unique professionals, have the type of connections who convince Attorney Generals to rule murders as suicides. 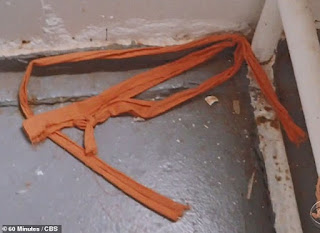