I was mentioning this in an earlier post to Bob and donations, and I wanted to share that there is a strategy to defeat Bill Gates Chess Titams, but it took me a bit to find the flaws in Microshah's demise.

I play at Level 8 which is the highest level. I have around just under a hundred games played, around 25 victories and about half that many draws. What I like about this game is it never gives up. You make it go suicidal crazy, but it keeps coming at you to the last pawn.
How it ranks against other human chess masters I have no idea, and perhaps they consider it child's play, but his is one of the best games I have come across compared to my self taught methods, as no one taught me how to play chess. I just play it in a logical way.

This game has a bias for Bishops and Knights. It will protect the Bishops and use them to pin you down. That is a good strategy, because most people do not pay attention to the diagonal offenses.

What I have found is this game uses Queen, Knights and Bishops, with a very good Pawn attack to knock holes in stationary defenses as I have always played.

How I attack is simple. I do all I can to kill off one Bishop, as one Bishop is like a man with one leg, and not worth a thing. In this game, I kill the Bishop with a like Bishop, but Titans does attempt to block and protect these pieces, once it experiences your pattern of attack. I keep at it though, as I do in then moving to take out one of the Knights with my last Bishop and this leaves me facing one Bishop, one Knight, usually against my like ranks or two Knights. At this point I care little for the last Bishop and will use it to kill a Knight, but I do keep at least one pony if I can, and deprive the opponent of Knights, as this is now a field of contest you can defeat Titans.

This may not make sense, save to players, but in opening up the diagonal, by moving pawns foward one space, on the left or strong side of the Pawns, instead of the upside down W on the right, the left flank will have an upside down U shape. Is important as the game usually will not attack this and open your pawn defense to probing attacks.

This then leaves a field of like members in 2 Rooks, 1 Knight, 1 Queen and 1 King, by an equal number of Pawns or I do not pay attention and often am down 1 pawn.

Titans moves to overload sides and project an attack. It is very good in double backing and if I appear with double, they appear with triple, meaning a Queen and 2 Rooks etc.

When this time comes though, as I have shattered their Bishop strategy and they move to Queen, I begin sorties with my Queen and forward positioning a Knight, backed by a Pawn. You must be careful not to over extend as Titans will kill your pieces, but lurking on their perimeters is a sure way to pin them down, as the game for a number of moves will not go on the attack.

It is here that I will go Queen for Queen in neutralization or if I am attacked by the Queen. If my Queen is attacked, I know I am in a spot endangering their positions.

This then is the point that you must have projected on one side or the other, an overload, where you had your Queen, two Rooks power positioning forward. You either do this, or Titans will accomplish this against you. That is where I lost games in I was playing slow like other games and not getting my overloaded side projected before Titans accomplished the move.

In the above game, I could dick around and try to force the Queen to die, but I suspect Titans is not going to allow the Knight to sit, and will break out and challenge to free up the Queen, and once the black Queen was freed, then my position would be precarious and I would in these positions be checked.

What I position for, in games is rook takes rook and even down to the King as an offensive weapons with pawns. The drive to make a pawn into a Queen is how I progress the game to a logical checkmate.


Titans even fights this pawn on pawn warfare expertly. As in real warfare or chess, it always comes down to position. Gain position and you gain victory.


I play chess well. I am not the all knowing in chess though. Give me time and I have been able in all opponents, been able to find the prejudices and biases to defeat an opponent. I may not be spectacular out of the gate, but I learn how to find the openings to beat anyone.

Time to go learn some more about the minds who made Titan what it is and enjoy the challenge.

Post Script: In the above game completed, I studied Titan's programming and it attacked exactly as I said it would, in going offensive with the Knight. After parrying for a bit in chasing the King, I placed my Queen between the black Queen and the Pawn. When the Knight checked my King, I sacrificed my Rook taking Knight, and stupidly the Pawn took my Rook, which in turn my Queen took black Queen without cost. Hence the term stupidly.

This was the final outcome in the positioning of the pieces for checkmate. Biggest challenge was not moving the game to stalemate and incurring a draw. 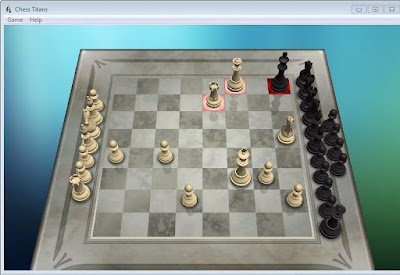