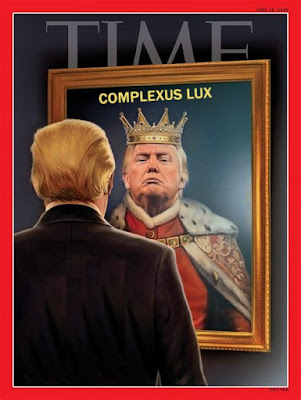 
President Donald Trump is in the process of surviving the 4th coup against him.

1. The William Kristol coup to deny him the nomination in 2016 AD in the year of our Lord.
2. The Obama Pissgate Coup.
3. The Robert protector of America Mueller Investigation.
4. The Adam Schiff impeachment.

It does not matter if these events were to herd this President to the cartel's bidding or to divide the Democratic party into a Webster Griffin Tarpley revealed Nazi and Communist wing to rule America. What matters is that unanswered, these plots continue and will consume the heritage of Donald John Trump.
If any of these coups had been successful, Donald Trump would have been indicted, railroaded into prison, his entire estate seized, and his children picked off for their doom. That is the consequences of what these coups against Donald Trump would have produced.
Donald Trump would have perished in a prison cell, just like Jeffrey Epstein.

Understanding those points in plots to overthrow a government, my Bible reading from the Holy Ghost centered upon Jehoiada, one of the good Kings of the Bible, as he engaged Hebrew Protestantism from his throne.

What took place in II Kings, when King Ahaziah died, was God's intended plan to rid both Israel and Judah of apostate leadership. Elisha the Prophet had anointed Jehu King of Israel, and Hazael King of the Syrians.
The house of Omri in Abab ruled in Israel by Joram. Jehu went up driving furiously and hunted the wounded Jehoram down after a battle with the Syrians. Jehu found there Ahaziah who had come up to Jehoram, as he was a cousin to the house of Omri Ahab by his mother, who was Athaliah.

With Jehu executing both apostate political houses in Israel and Judah,  Athaliah, went Richard III and murdered all of her grandchildren, and seized the throne.


In the events which followed, a son of the king, Jehoiada was hidden by his mother, Jehosheba.


But Jehosheba, the daughter of King Jehoram[1] and sister of Ahaziah, took Joash son of Ahaziah and stole him away from among the royal princes, who were about to be murdered. She put him and his nurse in a bedroom to hide him from Athaliah; so he was not killed.

For 7 years, the High Priest of Jerusalem, hid the legitimate heir to the Throne in Judah from the murderous grandmother, until with armed guards presented the King, Jehoiada before the people at the Temple. It was there, the High Priest executed the mass murderer and all who would still follow her in a complete revolution.

11 1  When Athaliah the mother of Ahaziah saw that her son was dead, she proceeded to destroy the whole royal family. 2  But Jehosheba, the daughter of King Jehoram[1] and sister of Ahaziah, took Joash son of Ahaziah and stole him away from among the royal princes, who were about to be murdered. She put him and his nurse in a bedroom to hide him from Athaliah; so he was not killed. 3  He remained hidden with his nurse at the temple of the Lord for six years while Athaliah ruled the land.
4  In the seventh year Jehoiada sent for the commanders of units of a hundred, the Carites and the guards and had them brought to him at the temple of the Lord. He made a covenant with them and put them under oath at the temple of the Lord. Then he showed them the king's son. 5  He commanded them, saying, "This is what you are to do: You who are in the three companies that are going on duty on the Sabbath-a third of you guarding the royal palace, 6  a third at the Sur Gate, and a third at the gate behind the guard, who take turns guarding the temple- 7  and you who are in the other two companies that normally go off Sabbath duty are all to guard the temple for the king. 8  Station yourselves around the king, each of you with weapon in hand. Anyone who approaches your ranks[2] is to be put to death. Stay close to the king wherever he goes."


13  When Athaliah heard the noise made by the guards and the people, she went to the people at the temple of the Lord. 14  She looked and there was the king, standing by the pillar, as the custom was. The officers and the trumpeters were beside the king, and all the people of the land were rejoicing and blowing trumpets. Then Athaliah tore her robes and called out, "Treason! Treason!" 15  Jehoiada the priest ordered the commanders of units of a hundred, who were in charge of the troops: "Bring her out between the ranks[3] and put to the sword anyone who follows her." For the priest had said, "She must not be put to death in the temple of the Lord." 16  So they seized her as she reached the place where the horses enter the palace grounds, and there she was put to death.
17  Jehoiada then made a covenant between the Lord and the king and people that they would be the Lord's people. He also made a covenant between the king and the people. 18  All the people of the land went to the temple of Baal and tore it down. They smashed the altars and idols to pieces and killed Mattan the priest of Baal in front of the altars. Then Jehoiada the priest posted guards at the temple of the Lord. 19  He took with him the commanders of hundreds, the Carites, the guards and all the people of the land, and together they brought the king down from the temple of the Lord and went into the palace, entering by way of the gate of the guards. The king then took his place on the royal throne. 20  All the people of the land rejoiced, and the city was calm, because Athaliah had been slain with the sword at the palace. 21  Joash[4] was seven years old when he began to reign


President Donald Trump had an absolute responsibility as a raised up Jehu to secure peace for his children, and the people of America, the British Commonwealth, French, Lowlands and Scandinavians, and to do it by force.

It is coming to the point that this President must produce a High Priest of the Law to execute sentence upon his adversaries as Jehoiada experienced in his High Priest protector.

This President has not been suited as a Jehu for the role he has responsibility for in why God raised him up. He has failed the Europeans, in the horrendous attempts by Steve Bannon and the Black Con Jesuits at rivals with the Pater Pope Francis, which has only cemented power with the true leader of the world in Chancellor Sebastian Kurz of Austria.


This President, if given advice, must appoint a High Priest Protector of his house. This High Priest must have the power to execute sentence, and this High Priest must be Protestant. America must end her adultery with pagan religion from Hindi, Jewry, Islam and Catholicism.
In that, this President must restore order in Europe. The Habsburgs have risen and must be joined to, but Europe must returned the legitimate Pope of Constantinople over the Pater Pope of Rome. Catholicism must have a legitimate White Pope, and the First Lady must sever ties with her Marionette fetishism and Francis. Donald Trump must choose the Pope of the legitimate Catholic religion as a friend to America in Europe, and restore the proper Germanic leadership of Europe.

This is the advice of the Lame Cherry in what must be done, to restore order, and to prepare to fend off the great hurt which is arising which will obliterate civilization.

This President must embrace Vladimir Putin in peace with Russia. He must produce a Germanic Saxon leadership from London to Vienna. This President must appoint a High Priest Protector in America, and he must with the Habsburgs appoint the White Pope of Constantinople to restore the legitimate leadership of the Catholic religion which will be pro American.

Donald Trump must complexus lux, embrace the light.  For his future, his family's future, his people's future, his heritage's future and for the future of the world. Christ must return with allies upon the earth or the earth will not be sparred.


This once again is another Lame Cherry exclusive in matter anti matter.