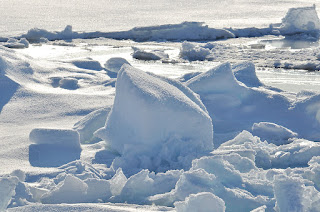 The purpose of Christianity is Salvation through Faith in the Lord Christ. It is times like this as I see my animals murdered by evil thoughts of others spiking satan, and watching other animals suffer and die in the cold, as I have done all I can for them, that the reality is for most people that there is not a Scrooge who is going to change their ways and save Tiny Tim, because people are selfish and tools of satan in the majority.

I have prayed, wracked my brains, pleaded to exhaustion for how to do things right, and no great miracle comes. I can see God working and praise Him for that and here am I thankful for God's Goodness to me, but that does not change the fact of the precarious position I am in, and while I can lie to myself most times or try to ignore how bad things are, they are there and the stress is horrid.

I'm not alone in this, as I see numbers of people going through the same thing in this great economy, which is not a great economy. It is what happens when evil creatures are in control of nations, it is the latter days, and the only thing which will solve this is Christ's return, but Christ does not return until piles of people are dead.

It is the thing which Job could not figure out. It is the thing that people have never figured out. Good people have bad things happen to them. They suffer horridly and it is God non stop shoving them off His lap and to the wolves. That is God;'s Plan as He desires only people who are true. The rich and the pew sitters smile at being Christian, but anyone can be a Christian when they have security and comfort. It is a different matter to have your heart ripped out in emotions constantly, being ill, being denied by God to be delivered from the problems, being alone, and still showing you come back in prayer. The Widow gives her last mite to God, because God will be obeyed, not just in bad times, but when it has been horrid years.

Is that something to sign up for? God is the only Way there is, so you either stay with His rough treatment making you a greater light, which has little meaning or comfort in this kind of suffering, or you give up and go to hell with all of the rich people.

It all makes me sad. It makes me sad that my cousin worked her whole life, has money, but her life is still emotionally hard, and her parent is ripping to shreds all she tried to fix. I would that all of these tools of satan were dead in mass. They would no longer be conduits for the devil to plague the planet and they would stop opening doors to evil. That is God's call, but I believe that the end times are two decades too late.

All I look forward to now is Heaven, in the hope of Christ's rest. I have no faith in people doing good. Everyone has their own problems and the few who help us here, will thankfully be rewarded by God in Heaven and be delivered here.
The only things satan and others can get at me is through caring about others, and that is what, here am I, have been ripped to shreds over again.

I can see why Jesus said the love of many would wax cold. Rich people are icebergs at heart, and people having their dreams taken, are just going to protect themselves and no longer reach out. I have figured, without any God given revelations, that the Christian of the end time will have to be more rewarded than people of Faith in better times. It is just harder now and there are fewer good people to associate with.

It is the most preplexing of things, in I did what was right, and good did not come from it, but evil. It has not been like Job in over in a few years. It has been a lifetime of this utter ruin, and it feels like most days someone ripped my leg off, beat me with it, then jammed a stick into the wound, leaving splinters, then it gets stomped on and tore open again, just when I let myself believe that things may give me some peace.

I saw my neighbor this morning and I could see in his eyes and hear in his voice how he has had it, in the words, "the extended forecast says below normal temperatures".

People are beat to hell and they cling to each step of the day, as that is all they can do. None are alone as God is there, but this is really something I......know it will not be remembered in Heaven, but this kind of inhumanity is not what any human was to experience, and yet they have over the centuries and still are today.

It rings hollow to "Keep the Faith", but that is all there is to do.