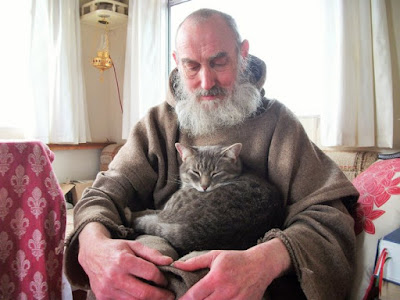 It is interesting in the Vatican under the Pater Pope, has just got wet panties over pedophiles, homosexuals, agnostics and communists, but when it comes to Catholics who are Faithful, the Vatican goes complete scorched Joan of Arc at the stake earth.

There were 3 hermits in Scotland, who issued a decree, like Martin Luther, stating popery under Francis was a heresy. They rightly called Francis a heretic.

The diocese was responding to a declaration posted by the hermits last April, in which they declared that tragically, “the head of the Church on Earth, Pope Francis, by his utterances, his behaviour, his teaching and his actions, has shown himself to be indeed a great heretic.”
“Never in history has there been such a Pope, who by his actions, words and teaching, has thrown the whole Church into confusion,” the declaration stated.
“Though we are utterly unimportant, for who is interested in hermits that dare to speak out, we cannot keep silent for fear of damning not only our own souls, but the souls of countless others,” the hermits wrote.


For those who still cling to Catholicism and Popery,  just look at the reality of what the Vatican did to Christians. Pope Francis made certain that these 3 poor hermits would be served ex communication papers ON CHRISTMAS DAY.

One of the highest days in the Catholic religion, with communion, and according to the Pater Pope if they took communion, they would be sent to hell as they were no longer Catholic enough for Francis.

This is the Francis who just signed over Catholics in China to their demise as long as the Vatican could keep the money flowing. Yet 3 hermits who were following the Bible, are thrown out of the religion.

You mark this, because the Bible states there will be numbers of martyrs for bucking what is coming out of the Whore of Babylon in not bowing down to this heresy. No one paid attention to these hermits but God and Francis, and Francis damned them.

That is some vicious thing in the Catholic religion that Catholics are destroyed for doing good and not condoning evil.

https://www.complicitclergy.com/2019/12/28/excommunicated-hermits-fight-back/
The three Westray hermits - Father Stephen de Kerdrel, Sister Colette Roberts and Brother Damon Kelly - reacted on December 28 to their Christmas 'excommunication' by Argyll and Isles Bishop Brian McGee. They call it "heartless," and stress that "it hardly shows the spirit of mercy so extolled by Pope Francis." The three do