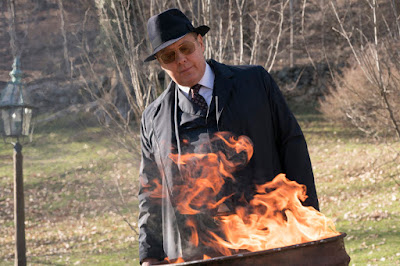 Iranian General Gholamali Abuhamzeh, the commander of the Revolutionary Guards in the southern province of Kerman, offered few specifics as he rattled his saber, naming only American warships in the Persian Gulf and the Strait of Hormuz, and the Israeli city of Tel Aviv, as potential targets.
The regime could also potentially attack US troops in Syria, Iraq, Bahrain and elsewhere in the region, along with US embassies or other targets. Cyberattacks are another possibility, an administration official told Time.

Abuhamzeh said vital American targets in the region had been identified “a long time ago”
“The Strait of Hormuz is a vital point for the West and a large number of American destroyers and warships cross there … some 35 US targets in the region as well as Tel Aviv are within our reach,” he said, according to Reuters.

Now for the Lame Cherry exclusive in matter anti matter for which you are yearning to donate for as this is now in a time cycle which will begin touching your rich portfolios.

The Islamocommunists of Iran will not attack the 35 above targets. The historical forensic psychology of the Persian communist, allied with London, Paris and Berlin, is to wait. The Persian mind assesses, watches, waits, plots, and relishes the build up to making their enemies pay in blood. Sometimes this is years. In all cases it is something which can not be traced back to them as the Persian does not want to be facing American JDAMS or rockets red glare. Let others be number one with a bullet as they await the Mahdi.

Again for the big money assessment, Iran does not have the luxury in the death of their noted terror hero, as the Quds will require to be fed, or they will turn on the turban heads.
Figure two months before the communists begin moving and they will strike not the 35 first.

Logic dictates this by past patterns. Of course I know nothing about this, as why would I incur another interview, but it is about patterns and logic. The Islamocommunists are coming and when the first act comes, it could be a feint, but when it takes place, it will not be what you think.

Those of the intelligence community know these facts, but just as Obama set up Benghazi for a hostage crisis, for this illegitimate birther to become a hero, winning the election over Mitt Mormon Romney, instead of stealing another as he did with John McCain, the Iranian surrogates had blackmail on Obama and a US humiliation.
Do you think maybe this is why Obama handed over billions of dollars to Tehran?

It is a mistake though telegraphing the finite 52 targets.


Targets do not threaten the United States. Persian Marxists do.