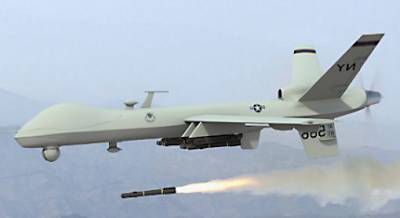 
I find nothing but despondency in the Presidential action of Donald Trump ordering the execution of the Quds terror leader in Iraq, by the Trump Reaper, a drone firing Hellfire missiles.

There is nothing to celebrate in the death of 1 terrorist, when in the case of Iran, the necessary number is closer to 1 million, spread around the globe.


Up to 4 AGM-114 Hellfire air to ground missiles can be carried or four Hellfire missiles and two 500 lb (230 kg) GBU-12 Paveway II laser-guided bombs. The 500 lb (230 kg) GBU-38 Joint Direct Attack Munition (JDAM) can also be carried. Testing is underway[needs update] to support the operation of the AIM-92 Stinger air-to-air missile. In March 2014, MBDA successfully test fired a dual mode Brimstone missile from a Reaper aircraft on behalf of the UK Ministry of Defence and Royal Air Force.

Americans are far too gung ho and not having been stung hard enough, in their memories, do not remember the torture of CIA Station Chiefs in Beirut to TWA Flight 800 blasted from the sky over America
The Iranians are coming. The Sunni communist terrorist leader, sanctioned by the Ayatollah, backed by London, German and Paris. They protect Iran and succour Iran, because Iran like Saddam Hussein is a cash cow of profit and position. Their enforcer in Iraq, who was about to deliver all that oil to this group for absolute plunder, and that enforcer was just blown to bits by the United States.

The last time Iraqi oil was in play by George W. Bush, all hell broke loose and broke that Michelle Obama hugging nit, and turned him witless.

That means that United States, her politicians, her people, her assets, her everything is a target.


The United States needed to eliminate not one, not a half dozen, but a million, and it still will not be enough.


The Department of State said: “We can confirm that in the past several days, General Soleimani had been traveling in the Middle East coordinating further imminent large-scale attacks against U.S. diplomats and service members. These threats were highly credible and the intelligence is sound. General Soleimani’s travel also violated the ban imposed by the United Nations Security Council.


This always goes back to the question, in all of this, with Presidents Bush and Obama protecting this mass murderer of Americans, what do the Iranians have that scared George W. Bush of the international crime family and blackmailed Obama to set up the Persian Patriots for mass slaughter and bribe Iran with billions of dollars, and now whatever that is, is coming into play.


Soleimani was responsible for killing hundreds of American soldiers in Iraq dating back to the start of the Iraq war in 2003.

All of that and Iran remained, until the last domino in the George HW Bush 7 Dominoes to fall. What has kept Iran from acting, is now deemed the appropriate trigger to bring about America in this final solution of a vast realignment of the world, with America destined to return to colonial villager status.

What is the ultimate weapon, that Iran could preposition to blackmail Americans to accept the Bill Clinton acceptable number of Americans slaughtered each year by Muslims?  The Soviets engaged in this gamesmanship in the Cold War.

The Iranian weapon is conjecture. The response from the United States will not be conjecture.

The reasoning in this is that Iran can be managed, acceptable collateral damage will result, but Iran will be contained for the greater objective.

The projection of this blog is that this will not be the case, as containment is not what those behind this have engineered a coming event and series events for.