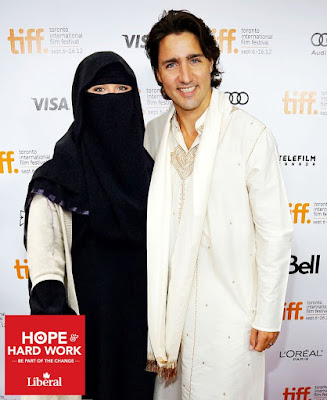 
What I am about to write has not a great deal with "most" Canadians, as I have a fondness for them. What the Lame Cherry though loathes about the stench of Canada is Ottawa and the genital disease of Canadian minds who are under the delusion that they can condescendingly judge Americans and actually are siding with global terrorists.

The reality is,  I have read Canadian comments threatening Americans that if America did use nuclear weapons, that Americans will be in hell for vaporizing innocent Iranian children.

This blog has something to address in this in explaining to Canadians the facts of life.


Why Trudeau is siding with the Iranian regime

For one thing, Justin's brother Alexandre Trudeau is an official paid propagandist for the Iranian regime.
As well, Bombardier has a $100 million deal to sell planes to Iran that's being financed by the Canadian government.
Maybe Trudeau's taking advice from his two Iranian born MPs, like Majid Jowhari, who's pressed Canada to be "friendlier" with the Iranian dictatorship, or Maryam Monsef who was born in Iran but lied and said she was from Afghanistan.


In the years of the American Revolution, 1776, and before that time, it was the policy of London and Paris, to initiate an American Genocide of any Americans who crossed into the uninhibited Ohio Country.

Then in 1860, Canadians provided the operational base for the intrigue of the Civil War which witnessed 500,000 dead American males, not to mention the carnage of the innocent children.


1876, witnessed the massacre by the same moneyed interests as the Civil War, in General Custer and the 7th Cavalry. Canada's response was allowing the terrorists led by Sitting Bull sanctuary.

After the period, the American Patriot, Louis Riel, journeyed to Canada, founded Manitoba and became the Great Emancipator of Canada in liberating the Mettis Peoples as Lincoln performed for the Blacks, in response Canada assassinated by hangman the Father of Manitoba.

The American and worldwide blood on the hands of Canadians while their clique condemns Americans, who are the only reason Canada and the world exists to contemplate morality and has any semblance of Rights is the thing as disgusting as Canadians proved what they are in re electing that black faced, Christian hating, misogynistic Justin Trudeau, who instead of being driven from Canada, was chosen again by voters there and now Justin Trudeau is choosing Islamic terrorism over the American People.

What follows next? Canada with it's Islamists begins firing rockets across the border into New York, Detroit and Seattle? Or does Ottawa wait and just ambush Americans in Alaska in shooting them in the back when the Chicoms invade Alaska? Or is it their venture to go in for the kill and start placing Russian nuclear warheads along the 48th parallel so thermonuclear warheads only have 15 seconds to reach the children of the United States?

What new treachery awaits from the Hudson Bay hordes who gave Indians tuberculosis and sent in Scot traders to steal what furs the Indians were producing.

President Donald Trump has outed more than just Iranian terrorists in this execution of the Quds terrorist leader, as the American President has revealed what a treacherous people Canadians have been for hundreds of years.
The Vatican and crown both preyed upon the Quebecois in their own final solution of Evangeline. For that reason, the President of the United States must save his salvos for the treachery of Ottawa too, before this heinous group damning Americans to hell, opening becomes the globalist agent in war against the United States. Fully recall it was Canada which was the base of electronic spying on candidate Trump and fully be aware it was Justin Trudeau making cow eyes at Ivanka Kushner, cucking her noble steed of a husband, the Jew, Jared Kushner in making trouble in that marriage, as Trudeau molested women in Canada and let it be known that squaws along the shores of Ottawa are better as cum dumps than heard from.

If this was World War II, and Justin Trudeau sided with Adolf Hitler, the United States would have declared war on Canada and ended that Ottawa scourge. There is no difference between the Iranian and the Ayrian, and President Donald Trump when he opens the war on Iran, produce a second front in Canada.
Soften the scoundrels of Canada up Mr. President with the rockets red glare and artillery thunder, and promise any American 1000 acres of Crown Land for liberating Canada, and your Home Army, the Trump Voters will pour into Canada and make short work of the regime in the dominion.

Let freedom ring in Canada, let the Mettis be armed with Colts, let the Western Canadian and Quebecois have long guns like cord wood stacked by their hearth, so this new State of Canada will outpour with liberty for the Christian, to never be tread under again.

The world is far too dangerous of place to overlook the treachery of Ottawa any longer. Remember Louis Riel, the assassinated American and Emancipator of Canada. Remember Ottawa in choosing Islamist terrorists over the United States.

For American security, Canada must be handled now, and not when Alaska is in jeopardy, and air raid sirens blare in the cities of Helena, Boise, St. Paul, Grand Prairie, Cleveland, Albany and Allentown are under attack from the Muslim missiles of Canada.

Mr. President it is your duty to declare war, as Presidents did to protect America in liberating Mexico, Cuba, Puerto Rico, Phillipines, and yes Europe, when American civilization ended tyranny as the city on the shining hill.


Let Justin Trudeau be the first in crimes against humanity trials on the Plains of Manitoba, where Ottawa assassinated Louis Riel.