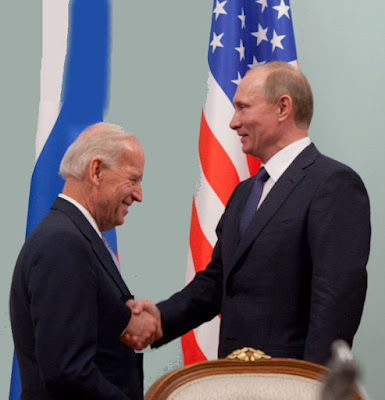 The Lame Cherry does not want war with Russia or Russians. Personally, I do not want to be absorbing atomic waste and shitting blood, over Ukraine.

Here is the way the Lame Cherry correctly assesses Ukraine and the Crimea, which if you do not care about it at all, Crimeans are mostly Russians and they voted to join Russia fair and square and legal. That is the price of democracy. George W. Bush gave Muslims the right to vote and they all voted to be terrorists. Just because you do not like the vote, does not mean that you as an American despot have the right to decide what the hell people vote on, and that includes stealing American elections in 2020 AD in the year of our Lord.

Here is what Pedo Joe was spouting off about.

Russia's newest warning that US ships better not come near Crimea likely also have in mind Joe Biden's first words addressing the long-simmering Ukraine crisis issued early in his presidency. He said in a February 26 statement that the US "will never" recognize Russia's claims over Crimea:

The United States does not and will never recognize Russia’s purported annexation of the peninsula, and we will stand with Ukraine against Russia’s aggressive acts.  We will continue to work to hold Russia accountable for its abuses and aggression in Ukraine.

He had underscored in the statement that "we reaffirm a simple truth: Crimea is Ukraine."

Crimea was a wild land in history until the Czar gave the land to Germans to develop, which they did, and then a new Czar tried throwing them into the army, and the Germans moved to the Dakotas, Colorado and Nebraska, turning prairie into the greatest wheat basket in the world. Those Germans were never thanked, just exploited and now are being erased. Crimea is German land, and if not Germans, than the Russian squatters who live there have every right to decide who the hell they want to be a nation with or alone.

"We warn the United States that it will be better for them to stay far away from Crimea and our Black Sea coast. It will be for their own good," he added.

See the US Navy, along with the Pentagon who stole the 2016 election from Americans, has with Pedo Joe's wokesters decided that Hillary Clinton's war with Russia is on the burner again, and they are sailing Americans warships into the Black Sea, which is Russian waters. It would be like Russia sailing ships into the Gulf of Baja in support of Mexico annexing California and Texas by force.

So the Russians are displeased with the Pedo Joe Pentagon policy of pissing Putin's face.

The Lame Cherry believes that Russia has already set a trap for the Wokesters of Obama. The threat for America to stay out of Crimean waters, is meant to goad stupid Americans into getting too close. The Lame Cherry observing war projections in what Russia should respond to, would have the Russian Navy pepper smart mines along the Crimean coast, and when US frigates pissed in Putin's face, a tracker mine would crack a frigate in half or two frigates in half.

The geniuses of the FBI cocking off with the Department of Justice in hunting down these criminalized Americans do not have a few Japanese farmers in stealing their California farms or making Germans kiss the sidewalk, in not being a majority, but now 100 million plus Americans in a super majority, with guns, are not going to fight a war with Russia, not going to support a war with Russia, but are going to welcome Russia assisting in a regime change in Washington DC.

Russia has been wooing American for years. It is the same history of Russia helping Abraham Lincoln against London and Paris in the Civil War. It is very simple politics. Vladmir Putin says nice things about Americans. Pedo Joe Biden calls them Neanderthals and has the FBI bullying Americans as the DOJ puts them into holding cells to break them, in having cockroaches crawl over them as the MSM laughs at their misery and mocks them and Judges allow this travesty to foment all for Obamaland and Bidenon 1% purposes.

This blog warned of all of this and now the wokerster storm is there. Pedo Joe can try and intimidate Russia with NATO in Brussels in the most worthless fighting force of fat slobs who molest children, as the US military is now woke with slobs who can not even do push ups. Russia will go through that like shit through a goose.

American air power is precise, but it is not a match for Russian defenses. American planes will wear out flying sorties and be shot from the sky. In a war of attrition, Russia wins, just as Germany lost in 1945 due to distance and the immense spaces of Russia.

Thee Pentagon policy is to lure Russia out and kill her on the plains of central Europe, where the Slavs will be fodder. Russian policy should be to draw America in which it has, and then have a series of America blunders as running into mines, being the expensive accidents of war.

Just remember that the always experts are setting a stage what Russia will not use nuclear weapons, as the air currents in Ukraine will spread the fallout across Russia and into Korea. What is overlooked is when America uses their tactical low grade nukes in the Black Sea, that is Russian territory and it would trigger Russia to use their own nuclear arsenal parked off the American coasts, on American targets of the command and control of the police state, and the communist state enclaves of California, Washington, Oregon, New York, New England, Illinois and Virginia. The 1% would not have any protection from the roving hordes of 100 million armed Americans then who would produce their own state based revolutions in the Reagan Blue States. The paradigm would change.

The fact is the United States can not win a conventional war with Russia on her borders, and if America uses nuclear weapons, the Russian response will produce a revolution as large as 1776 with the same results.

Add China to this, and China will acquire Alyeska for Russia again.

Joel Skoursen believes that China will take Taiwan this year and that Russia will take Ukraine this year. Mr. Skoursen is not factoring in that Americans are not allied to the Biden regime, but are allied to the wooing of Vladmir Putin.

These are the projections on the published data. It is a massive problem for the United States or the Wokesters of Bidencon.
As I have counselled in all of this and am thee example. You do not cause trouble for yourselves by acting out. You pay your taxes and obey the laws. You get your stores in order to stay alive and you go gopher in keeping your focus on Jesus, as this is not about fighting or resistance. This is about keeping your head down as these events all manifest.