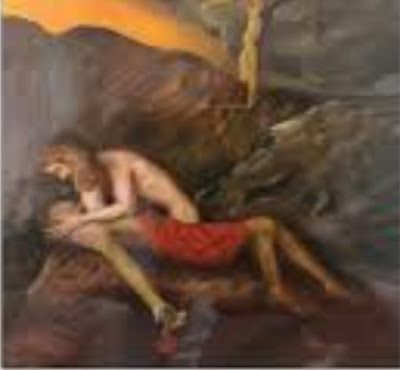 I pray the Lord returns quickly as it disgusts the Protestant Christian to see the 1% having bastardized Americans religions with sodomy and women in the pulpit, advocating apostasy to destroy the Christian Church.
At each interval of some evil like the FBI now hunting down Americans for being Americans, the DOJ holding Americans in captivity to break them in torture was cockroaches crawl over them as they try to sleep, I think this depravity can not get worse, and then the Vatican's publication comes out that the Pater Pope who in reverse speech is involved in child rape, and has espoused pure blasphemy that no one needs Jesus to enter Heaven, has in his office a disgusting painting of Jesus, naked, having arisen from the dead, caressing the dead body of Judas Iscariot in some kind of necrophilia.

If this last pope is not the False Prophet, I do not want to consider what something of satan that is in league with the beast will engage in. Pope Francis is not Christian, he is not even Catholic. What is the definition of someone who advocates sodomy, pedophilia, is anti Jesus and promotes intimacy with the dead? Pervert comes to mind, as this is certainly not Christian.

And what of Judge Amy Comey Barrett, the Catholic skirt on the Supreme Court? She is as silent on this apostasy as she was on Joe Biden stealing thee election. For all the Catholic bullshit of how moral they are, Catholics are dead silent about this latest disgusting promotion by their Pater Pope.

According to the Vatican’s own newspaper L’Osservatore Romano, Pope Francis has placed a painting of a resurrected nude Jesus ministering to Judas, Christ’s own betrayer, behind the Pope’s desk in his personal study in the Vatican.

The Vatican newspaper dedicated the first three pages of its Holy Thursday edition to Judas and called into question, as Pope Francis has done, Judas’ damnation. Although Pope Francis has, several times already, suggested that Judas is not in hell, that notion directly conflicts with statements of previous popes and Our Lord Himself, who said of Judas it would be better for him that he had not been born.

Yes this anti Christ in the Vatican with all it's faithful silent followers, has a rewrite on all unforgivable sins, and as this goes to hell literally, we have discovered that this repulsive painting was inspired by the Pater himself, and he espouses that Judas is in Heaven.

To many faithful Catholics, it seems like Francis is betraying the Mystical Body of Christ in much the same way that Judas betrayed Our Lord.

This painting being behind the Pope’s desk and placed on the cover of the Vatican newspaper is itself a scandal. Andrea Monda, the director of L’Osservatore Romano, explains in the Vatican newspaper’s editorial that the painting was inspired by Francis’ 2018 book Quando pregate dite Padre Nostro in which Francis suggests the salvation of Judas.

For a review in this for those in Catholicism who are going to hell, Judas murdered himself, after he conspired and murdered Jesus for not making him king of the treasury. Judas hung himself, his guts burst out as he used a long rope, and the stuck him into the Potter's Field which was purchased with the 30 pieces of silver, blood money.

Judas REJECTED the Gift of Christ's Grace in forgiveness for betraying Christ. Peter who denied Christ in betraying Him, accepted forgiveness for that sin, and Christ built the Church upon him. There is nothing in Scripture that backs what this False Prophet is branding on every silent Catholic who is joined to this like Germans to the Nazi or the Ashkenaz to global genocide.

The Lame Cherry denounces this disgusting order of sins of Pope Francis. All those who remain joined to this are guilty of that unforgivable sin, and that includes the American Lutherans with their sodomy, the Methodists with their sodomy and whatever else satan has the spawn of satan preaching as their doctrine.