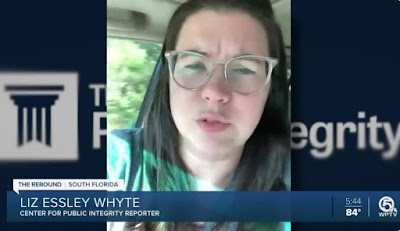 This point must be made first, in why is it that the woke in America have so many attractive persons in it, that a lesbian just is brought to pause as there is the lovely Alexandria Ocasio Cortez, and now this Liz Essley Whyte, with her wonderfully attractive name to match her attractiveness. It must be such an extreme burden for women like this to deal with this attractive handicap which is not even dealt with by the American Medical Association, WHO or CDC, or even the woke parties as Jen Psaki has shown jealousy over women attractive like her, and it just makes one exclaim, 'Can't we all just get along!".

My reason for featuring the lovely and talented, conscientious Liz Essley Whyte, who works for a no profit in Washington DC, hunting down family members of the vax deniers, to dox them and bring to attention that some people make money off of the vax denier portfolio.
The Lame Cherry appreciates the intrepid work of the sisters on the woke left in exposing this, but would appreciate even more an answer in how you make money being a vax denier, as I'm not a vax denier, but I would like to make money as times are rough on all of us, as we wait for AOC to write out our 5000 dollar a month woke checks as last I heard Pedo Joe Biden is aiming for 6 trillion in new spending on top of this 3 trill in new spending. That Pedo Joe makes the crack ho Obama's look like election plate pilferers compared to Biden going for what is in the Vatican's vaults.

So if someone can please make this into an article in how my make money by JUST SAYING NO, like Nancy Reagan said long ago, except for YES to gun control, I would like to know the secret and will pass it along here, so all of my readers will be Vax Rich in a short time.

'Center For Public Integrity' Reporter Targeting
FAMILY Members Of Anti-Vaxers...Digging For Dirt
To Smear Them Across NPR, NYT, WaPost And AP

It was something TL noticed in reading an article, which  Lizzy apparently was the source for on NPR which prompted me to write this praise of her, as the NPR Journogender who was writing, was most upset about rural Black and White from Alabama and Mississippi, along with other Conservative Christian States not taking the vax. Let's face it, the Anthony Fauci propaganda just is not working. Let's face it in Fauci is an old White priv who looks like he has some skin disease. No one wants to take advice from someone who looks like he is auditioning to be a leper in a suit. So all of these wokesters have gotten injected with this synthetic prion serum, which is killing people, killing babies who nurse, aborting babies in the womb, eating livers and eating brains, in creating psychological changes in people, and they appears very upset that those who are the ReVaxNiks ( this is a term for the Russian Jews who were labeled REFUSENIKS' in the Soviet Union refused to let them immigrate to the state of Israel) so the ReVaxNiks have made a sound medical decision in not taking an experimental drug, which is not a vaccination at all, as it is instead a carrier in both mRNA and Adenovirus forms for this hyperized spike protein which is the original biological weapon that Obama and Fauci funded in Wuhan China, and now these vaxes are causing great harm and producing long term health damage.

Refuseniks included Jews who desired to emigrate on religious grounds, Jews seeking to immigrate to Israel for Zionist aspirations, and relatively secular Jews ...

I can understand how the Vaxed are upset about this as they thought after the January 6th set up, that the FBI would have gunned all the MAGA people down by now, and here are these ReVaxNiks who are still making money apparently in not taking the vax, while the wokesters are getting sicker by the day to their final end. The Vaxers are upset that they apparently believed their propaganda from Fauci, Obama, Biden, the CDC, and it is harming them, while these low education, Caucasoid and Negroid who are in flyover areas are recovered from the biological weapon series in their own immune systems and flourishing, as long as they stay away from the Vax Shedders who are infecting women in causing all sorts of bleeding problems in their periods.

It must be especially infuriating in the people who should be in FBI gulags are still free, and are not wearing masks with Chinese Morgellons in them and are not being vaxed with these nano particulates and that deadly synthetic prion, as they will be alive to get the next stimulus checks, while the vaxed will only get the one time several thousand dollar death benefit, but even in that, the death benefit only covers COVID, there is nothing in the benefit from Bidencon about dying from being vaxed. The good news is for the vaxed though, that soon enough their brains will look like sponges and they will not remember anything. From my observations, the vaxed I know are much more happy, the enjoy telling their dirty secrets more and are easier to get along with, even with mood swings like rabies, than before. So the vaxed will be intoxicated amnesiacs in getting along with people and not caring  they are dying. This is really the best evolution for the wokester as they are usually so upset about life, and upset about people on the Right, that none of this will bother them soon enough, and let us face it, the Fauci vax is going to actually take the depressing things out of liberal's minds, and make them happy like Christians are in turning the other cheek. Who would have thought a prion would make the woke pseudo christian, at least in the nice part as I have not heard about any confessions or professions of Jesus. 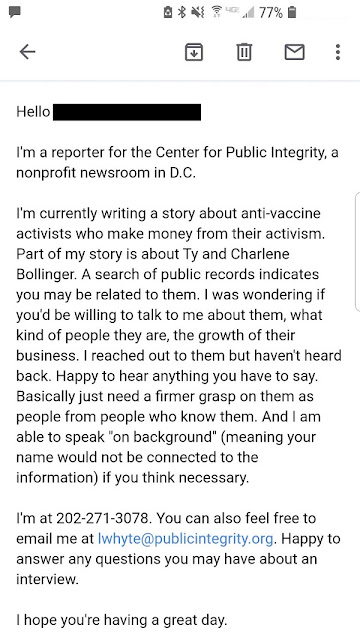 So that is the forensic analysis of this psychological development. It seems the FBI will soon be pleasant as they have all been vaxed and people who are using Lizzy Whytes's research at NPR, WashPo and others without credit, will soon be smiling and happy wokesters, not upset that they were betrayed by Pedo Joe and Dr. Fauci nor upset that all of these ReVaxNiks will be alive and thriving, inheriting the world at peace, and like Goldilocks sleeping in wokester's beds, driving the wokesters cars, spending the wokesters money and enjoying themselves.

The Lame Cherry moves though that all the ReVaxNiks, promise to set aside 1/10th like a tithe to God, in all the money and possessions these soon to be deceased Vaxers will leave to posterity, so a nice memorial can be built, say in South Dakota, a big bronze statue like 500 feet tall by Mount Rushmore, of the melted down things the Vaxers had, like two nice columns framing the Shrine to the Republic, so the survivors will remember the great sacrifice those who took the vax serum, so a depopulated world will only be lived in by the ReVaxNiks.