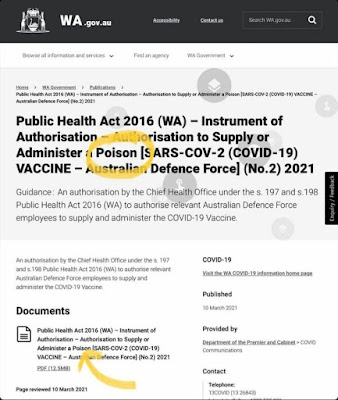 I found this link on Startpage and it is legitimate.

The Lame Cherry was not about to get this scrubbed, as this has been on Archive.org for a few days, so I entered into into the archives there.

Now there is not any way this can be scrubbed or denied.

Australia defines the vax as a poison. If I need to repeat that for the employees of NPR, NYT, CNN, WashPo, all of those Agency employees of FBI, Homeland Security, US Marshalls, even SDNY and all the US Attorneys who have been masked up by Pedo Joe and coerced into getting this vax, that the Government of Australia knew this is a POISON.

The FBI who contracted with David John Oates of Reverse Speech and then threatened him over their massacre of the Branch Davidians as Oates had told them the entire situation could have been ended peacefully if the FBI had let Koresch'es Mum visit him.
Mr. Oates in doing reversals on the Australian Prime Minister revealed like with Dr. Fauci, that they all know this is a scam and the Oz PM revealed a strange reference to this vax in the word SCAB. The Governments know that there is a scab or a condition linked to this injection.

So the very police state and media which have joined to hunt down Americans, have been played as fools and in this game, this is not a game, this is life, and the reality is the simple statement, "How long do you live when you are administered a BIOLOGICAL POISON?"

So all of these wokesters have a serum in them of synthetic prions, and the masks that Pedo Joe ordered them to wear for months, were impregnated with Chinese Morgellon's fibers, activated by heat and moisture by breath.

This is real and no denying this any longer. Australia knew this was a Biological Poison in the vax. That means the United States, England, Canada, India, Germany, France, China all knew this was a Biological Poison which was being mandated to be injected in nation's medical, law enforcement and military first. They knew that the wokesters would flock to this Biological Poison first, the very people who donated money, time, votes, who cheered the hunting down of American after January 6th, and their genitals, are the first ones who are going to be afflicted by this bioweapon.

The answer is NO.

This Covid was engineered at least 5 years ago in process. All of this was known, and all of these people from Homeland to Hospitals to Media, were going to be used and then exterminated when their use was over.

This is vax is a Biological Poison. Millions of people have been poisoned.

POISON: Any substance that causes injury or illness or death of a living organism

Humans are living organisms as are their pets. This Biological Poison is injuring, making ill and murdering them.

I have warned of this from the start. What are these armed federal agents going to do once they figure out their 1% they serve poisoned them. What will those wokesters do in their violence engage in against their 1%.

We will know in the next 14 months as this clock runs out.

As Cliff Mickelson stated on Rense, "People have to think about the question, of where they are going to be a year from now?"