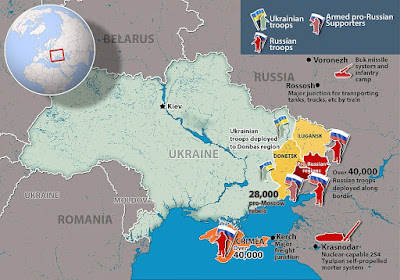 Russia is in the building phase for the securing of Ukraine. The fact is that NATO nor America can stop Russia and Moscow knows this fact. The Ukrainans Nazis of Joe Biden and the dead John McCain, issued an ultimatum that Ukraine would drive Russia out of Crimea. President Vladimir Putin has responded to this threat with a massive show of force.

Pedo Joe Biden responded with a massive quaking, not from his Parkinsons, but hoping Vladimir Putin is not going to make Pedo Joe shit his pants again.

Russia is deploying a massive amount of firepower and it is time for Joe Biden to re enact his namesake of Neville Chamberlain and offer Moscow Crimea which Russia has, and the western Russian provinces of Ukraine, as Biden offering a summit shows what shit stain undies he has in fear of Putin and the feckless Biden crowd have no solution which will not bring war.

There was the gambit of the Ukrainians stating that Russia is preparing for the deployment of nuclear missiles in Crimea. The amount of Russian firepower already in theater is beyond what NATO could deal with and why Joe Biden had the US Navy run for the high seas, as the US was about to lose it's frigates in this Biden show of dismal force.

I will repeat this in Russia is in preparation.

I could offer a way to stop this as blessed are the peacemakers, but as the FBI is hunting down Americans and over 100 million Americans are not welcome in their own country, what is the point as Pedo Joe stole the election and I no longer have any stake in this.

Russia is pinpointing every Ukrainian artillery position and tank. When Russia comes they will obliterate every position in the first hour.

As I'm a Protestant Christiaathn looking for Jesus return, my advice is for you to get your supplies to keep you alive and your head down, all topped off and enough chips and refreshments to enjoy this, as this is not your fight like all of this 1% is not your path.  You have been informed long enough to understand that when this has kicked into gear, it will not cease until the last soul is rotting. It started before this and the pale horse is coming.

Enjoy it as that is better than worrying about it.