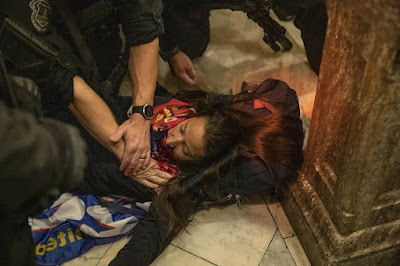 Ignorant Americans, this was not murder.

The Lame Cherry applauds the United States Department of Justice, FBI and DC Police for publishing the fact that the murder of Ashli Babbitt was not murder at all, because murder by federal officers does not matter in a dead body, executed by an officer of the law, because what matter is intent.

You will remember intent from FBI Director James Comey stating that Hillary Clinton breaking the law did not matter legally, as it was her intent that did matter, and as we do not know what Hillary intended, she did not break any law.

What the Lame Cherry is puzzled by is, why are Americans being hunted down for January 6th and held in confinement without bail as cockroachs crawl on them, in order to break their wills, in torture, are not afforded the same 'intent' as the murderer of Ashli Babbitt.

Were not Americans fearful of the 2020 election being stolen? Were not American's panicked on January 6th with police attacking them, murdering them like Ashli Babbitt? Were not Americans negligent in not knowing that sitting in Nancy Pelosi's office or drinking wine from a cabinet was against the law, any more than the House they paid for, was not a House they were supposed to not wander around in? In the end, can not every American who has been hounded by the FBI and DOJ, have the same quality as the murderer of Ashli Babbitt in showing poor judgment on January 6th?

The answers to the above is affirmative in every case the FBI and US Attorneys have made.

The decision follows what the department is calling a “thorough investigation of Ms. Babbitt’s shooting.” After reviewing video footage, social media posts, officer statements, witness accounts, evidence from the scene, and an autopsy report, federal officials claimed “there is insufficient evidence to support a criminal prosecution” over the death of the 14-year Air Force veteran.

The DOJ’s press release, which refused to name the officer who shot Babbitt, also stated federal prosecutors could not prove beyond a reasonable doubt that “the officer acted willfully to deprive Ms. Babbitt of a right protected by the Constitution or other law.”

Instead of unreasonably shooting Babbitt, federal officials said the officer could have acted “out of fear, mistake, panic, misperception, negligence, or even poor judgment cannot establish the high level of intent required under Section 242.”

Now everyone reading knows what the murderer of Ashli Babbitt intended, because he was shown having advanced to the door, supplanting another White agent there. Liberals demand that Americans give ground when confronted with a criminal, yet this officer advanced and then murdered a small woman of 110 pounds, who was armed with a scarf in her backpack. This officer at the point blank range of Ashli Babbitt could have shot this innocent woman in the knee to stop her, but he instead chose to shoot an unarmed woman with a kill shot, intended to take out a major artery to end this woman's life.

Yes intended is intent. That exposes the DOJ as covering up another murder.

Not one federal agent was ever prosecuted for any of these murders and they never will be, because murder is not murder, when the police state murders innocent Americans.

There was not any doubt in any of these murders of innocent Americans that those federal officers intended to shoot to end the life of those they were shooting at. Ashli Babbitt was unarmed. LaVoy Finnicum in Reverse Speech stated he was unarmed. The children with David Koresch burned alive were unarmed. Sammy Weaver was defending himself after his dog was murdered by a federal agent. Vicki Weaver was unarmed and federal agents taunted the Weavers still alive in the cabin about their dead family member as she lay rotting on the floor. Gordon Kahl was set up in ambush and defended his family after federal agents attempted to murder him and had shot his son.

There is nothing which can be done about this corruption by the police state. It is a fact of murder as the police state has an above the law license to murder Americans, and does so by example to intimidate the mass of American society.

Everyone knows this was murder. This is the realm of the Christian to trust in the Lord in Christ's Last Judgment as Jesus is the One Judge Who is not corrupt and does not make excuses for satan the father of lies and murder, nor for those who follow that anti Christian and anti American stance.

We do not know why two DC police officers committed suicide after the events of January 6th. It was not because they were harmed, but it was logically the harm they caused others, as they shot, beat, sprayed and attacked Americans on that day to get them to respond with force. They knew Ashli Babbitt was murdered, that people were trampled, that people drugged, and they enticed it to happen. They knew they had helped overthrow America and injured Americans instead of protecting them, and it was too much for them.

It is what it is. We are all like the gazelles of Africa in the lions have made their kill. They made us watch it and we know murder took place, but the lions make the law and that is the way it is. The lions already have other examples to be made in the following months to promote stalled legislation on gun control and marking Americans as domestic terrorists. This is not two tier justice, but defined predatory lawlessness. Some define it as the law of the jungle. Some call it feudalism. All poetic and all thoughtful definitions, but in the end it is just murder as old as Cain murdering Abel in a field.