The Book of Life to be read - After the Bible 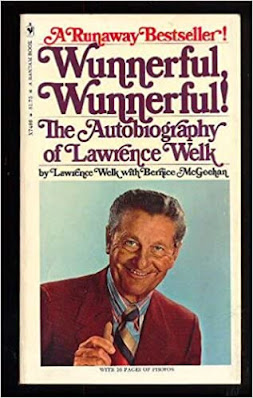 I have the deepest admiration for the unfinished autobiography of Benjamin Franklin for it teaching children and adults how to live a productive and prosperous life. I never thought I would read anything close to this common sense outside the Bible, but by God's design He put into my collection a throw away book by Lawrence Welk, the German American from North Dakota who began life thinking he was Dummer Esel, a mental retard, but through hard work, moral living, placing God first, and learning, paying attention and practicing those values, he eventually won out, when all the other big bands were fading.

It is difficult to place all of Mr. Welk's philosophy into one phrase, as it was a lifestyle. This is not to say that he did not suffer catastrophic losses. He almost died as a child from a burst appendix and recuperated for a year. His father resisted his going into music as that lifestyle would harm his Faith in God. Mr. Welk survived bus crashes, car crashes, more than you can count he was down to his last pennies, but he tried and would not give up.

At one instance he was hired with his band at 435 dollars a week to play in Arizona. When he got there, the ballroom was closed and the 22 owners refused to open as everyone they booked cost them money. Mr. Welk in desperation as he had no more money, offered to cover their losses if they would just open the ballroom one night to prove to them he could make them money. In the end, he succeeded, and in the percentage he worked out, he actually did better than the wage he was hired at. It was that finding a way to make a dream happen when his back was against the wall and he was over the cliff, that moved Lawrence Welk to the top after years of hard work.

He was used, he was lied to, he was robbed, he was banned in Omaha from playing by the union there. He never forgot a lesson or made the same mistake twice. He was always ready, as self promoter, who once created his own chewing gun to sponsor him, set up beauty contests in South Dakota based on that gum and sold more gum for money than he made playing in the band.

At one low point, his band quit on him, blaming him for holding them back. Lawrence Welk got a new band and the people who dumped him in the most cruel of degrading Dummer Esel terms to his face, failed miserably and disappeared, save one which came back asking for a job, and Lawrence Welk showed the better angel of nature in hiring him back as a friend.

I would recommend this book to everyone as a preparation for life and as a lesson in lives lived. This book is common sense in how to be successful and how to get up and make something out of nothing when all is lost.

It is one thing to say you have Faith in God when things are going right and when you are born with a silver spoon. It is another thing to take your talent whether it be baking bread or being the person who gets the job done at work, in those Gifts from the Holy Ghost, to trust God and believe that God believes in you, and to keep on when you fail, not making the same mistakes in failure, but finding a way to succeed in Inspiration.

God has a plan for everyone, and sometimes it is not what you think it is, as has proven in my case. I have been told NO thousands of times, but the thing is, it only takes one yes, and in the creation of this blog, the person who said YES was me, not someone else I put my future into their hands as they did not know jack or shit about writing, only giving shitty advice to keep failing in a Mockingbird market of college tards who are taught to write, instead of teaching people in what you compose.

The books is out there if you dare read it. It takes effort and most people are too lazy to try.

How about you, your children and grandchildren.