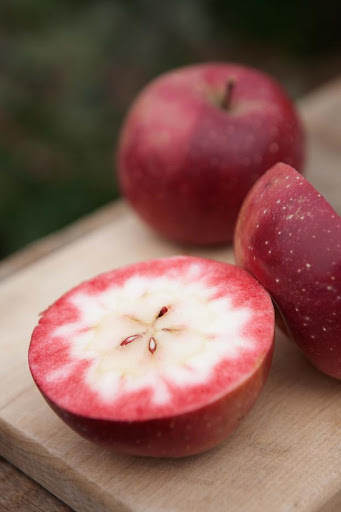 Apples, like potatoes are the most wonderful creatures God ever provided humankind with in they have in them the genetics of thousands of different varieties. It is amazing in chickens and tomatoes that they sprang forth so many distinct creatures from one simple plant.

Where our apples came from are really the product of 3 chokepoints in history. The apple appeared in the Caucasian regions of western Asia in the mountains there, and began spreading south, and this is where the history of the apple begins in ancient times, as it was the Romans who took the fruit with them to every place they conquered.

Writers like Virgil, Cato and Pliny were able to list two dozen varieties of apple. And a contemporary of theirs, Columella. describes and recommends distinct kinds like the Armerian, the Cestine and the Syrian,

One can see that it was in the Northern Mideast where our apples derived from, for this is where Rome noted their apples came from. It was from these apples that the land Caesar ruled in France, where apples would begin to be grown with a French taste.
Apples were carried to Briton, but those varieties are not the ones which dominated. What would become the apple of the world, would arrive from King Henry VIII sending his botanist to Versailles France where those pips, or seeds would transform into something unique.

It was the French Margil apple, which would in England, produce a relative, which would become the Cox Orange Pippin. The apple is almost 200 years old, and is still the mainstay of English produce.

It was the English apples or seedlings which would arrive in the United States and in numbers of random seedlings which sprouted would begin changing the world of the apple. Apples were of two types, the cider and the eating kind. It was in France which it appears that apples began to be stabilized into a desert type. That is not to state that every apple seedling planted will produce like the parent, but Margil to Cox was an epic leap of eating quality passed on. From that generation in the same period of American apples, a number of standard varieties began to appear, and when a seedling out of thousands of seeds from the east grew in Minnesota, and was hardy, in the Wealthy, the next leap appeared in fruit quality which transferred wonderful genetics of like eating apples.

Apples come in so many colors, flavors, shapes ans varieties that it seems like it will never run out of genetic diversity. There is no such thing as a bad apple. A bad apple is a wonderful cider apple. A tree which will not produce, is a tree to graft onto, and a good apple has in it's seeds, the genesis of so many new varieties.

So the history of apples comes to us from the Caucasian Mountains, down to the land of Armenia and Syria. Roman armies then transported them to Rome, where grafting and improving spread them in the empire, and into France, where the French undertook a breeding which set what apples really would begin to taste like in modern times. Cox Orange Pippin would be the foundation of what would become the apple flavor, which in those roots to America, in the New York. Massachusetts and Virginia areas would lay the foundation for the varieties moving into the Ohio, and then Minnesota.

It is almost scary to think how fragile an apple seedling is. Like Granny Smith found the Granny Smith apple growing in a cast away lot of apples in rubbish and in transplanting it, produced this marvelous variety, like the Northwest or Rhode Island Greening. If Margil had not appeared in France, what would apples be now? If Cox had not come from the Margil line, what would apples be? What of the American types from this group of apples, would we have anything that resembles what we have if Wealthy had not appeared.

In that, the Delicious apple is a good apple when grown in good soil, like Iowa. Most have left that apple behind as it should be, but how apples have advanced beyond Delicious, reveals how bad a number of apples really were. Apples used to make your eyes water and give you a gut ache.

I remember as a child eating Winesap, Jonathan, Baldwin from the old orchards, and then discovering the Haralson in how that apple was so far ahead of even the Delicious. It is relevant that Minnesota has not moved past it's Fireside of 80 years ago, and Honeycrisp is a fad in passing as growers are not producing this apple as they should, so they are horrid things, much like the original Granny Smith were delightful apples and now are nothing but things for the chickens to suffer through eating.

Apples are something that a person should live 500 years to be able to sample and grow so many new varieties to study. That honestly is the only reason I would ever want to live that long, just to grow things and learn of them.

With that I close on the heritage of apples. Those wonderful fruits which I hope that people would grow from seeds to see what they might have, to change the world.