The Too Large Crop 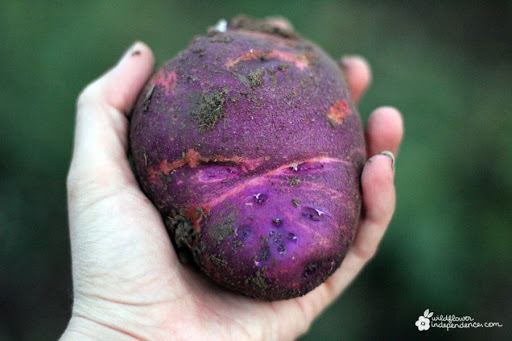 As Richard and Stephanie can attest in the drama of our garden the too much labor of digging trenches for rows of potatoes, has produced an outcome in a severe drought year of problems for us.

See our neighbors to the north, both garden along the road, which I can not figure out why, but it allows me to enjoy their gardens. They never water or water only enough that a mouse could piss after a Hamms beer binge in Minnesota.

The net result is they dug their potatoes the end of September, and it looked more like a coon digging for grubs as the potoates were shallow and they were about the size of ping pong balls.

In having too much to do, and not wasting time I do not have, I was filling cow tanks and awaiting TL to appear, so decided to dig into the potatoes, Purple Viking as I did not plant that many, probably 20 hills.

The above photo would be a small potato from our harvest. We got these potatoes which are too big, and all of them. Nothing for seed and potatoes which basically will feed us for two meals in hash browns, which is not what I would prefer as cut potatoes go bad fast.

I am not complaining in God's abundance, but in a severe drought year, we gardened too good. We dug foot deep trenches in hard clay, layered in Baby Belle and Daisy cow shit, and I did water the blessing into those rows, but when they are in rows, you can flood and concentrate the water, hence you get these potatoes that the Jolly Green Giant would bust a nut over.

I don't know what to do for seed next year, and I have yet to get into the Yukon Gold which I hope produce well too, but this is a lesson in the American Drought. This drought is not going away. It is HAARP giveth rain and not in man replacing God. You are going to have to learn about how to make things grow.

I thank God for the bounty, even if the spuds are too large, because this proves what I have done to be right. This is how you grow potatoes and that includes onions when you are in a drought or have soil that is not from the Garden of Eden.

I still need the tractor for the digger, and I still need to get the rototillers I obtained working, as I have to dig deep, have to get that soil loose and I have to mix in compost to make this clay and sand more loam for nutrients, but not too much so it dries out.

I can attest the clay on the south end of this garden is hard as cement. It would have been impossible to dig as I have done that, and all I would have grown were small potatoes and there is not much worse than gardening and being stuck picking up numbers of marble and ping pong ball sized potatoes.

Last year we grew pretty good spuds, and others had small potatoes too, as it got dry when the crop was forming. There is not any secret in potatoes in they just need steady water and nutrients. Do that and they will produce.

I have had better potato crops, even in dry years. Vikings are wonderful producers, and they did worse last year in the wet, than this year in the dry. I am certain if I had a bit more rain, that I would have gotten a second growth and had less huge potatoes and more big and mediums which Viking usually produces.

The plan though is a tractor, deep digging and more of these trenches, as I would like to plant carrots but the seed was all gone last spring due to hoarding. Am gong to put in cold frames, and screens for the cabbage crops so I will not have to powder for worms.
I just need money, land, time and foremost God's blessing on my work, and my blurting out in keyboard vomit the money first, reveals I need to get my priorities straight with God first in my thoughts, even though I am working hard on that one.

I should have more stories in this and I hope my pictures of the crop as I move onto other things to discuss here. Wait until you see the sweet corn and beets.

Yes you will have to wait.