Getting White Wood over Swarthy Squaws 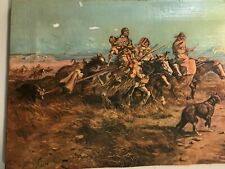 I'm not a huge fan of local primitive artists, as they are primitive and celebrated as no one else is around.

CM Russell or Charlie Russell is one of these glorifications out in Montana.  He stems from the late 1800's to the early 1900's as America was transitioning from Indian terrorism, to the cattle ranges, to small farmers not making it on the high plains which did not have crops which could be farmed.

I do like though studying old artwork, as Russell records like Caitlin things he saw. He glamorized what he saw, for the simple reason, the Indians he was painting were Black Feet and Cree, and by the time he was on the ground, the fight had been taken out of the land.
Theodore Roosevelt was still having problems with reservation Sioux who would come out to have a thrill in murdering a rancher they could bluff, but that was not the high country of Montana, as  different world was here and is why Russell was in Great Falls.

The painting above is one the uncle had and I was studying the print today, over top of his heater which has it warped like a wet diaper, and what fascinates me is the colours of the squaw, they all have a quirt in a special design to whip their horses, and the actual quality of these horses, as they have been crossed with Americans horses, in this last place on earth.

I was really interested in he dogs the Indians had there, as most special breed and one gone. Heavy furred and more wolf like than dog. The Sioux and lower Plains Indians ate dogs like these, and you can see you could get quite a meal out of them. It was wonderful to see what these extinct breeds actually looked like as they came south with the Apache out of the Northwest Territories.

Russell is noted for having a boner for Indian squaws as he paints them sultry and attractive. Yes the Black Feet are an attractive race for the most part, and one can witness they look more Japanese Caucasian than the Mongol look of the lower Plains Tribes who were completely Apache Aboriginal.

Colours are a large part of the Black Feet and they did make attractive patterns. 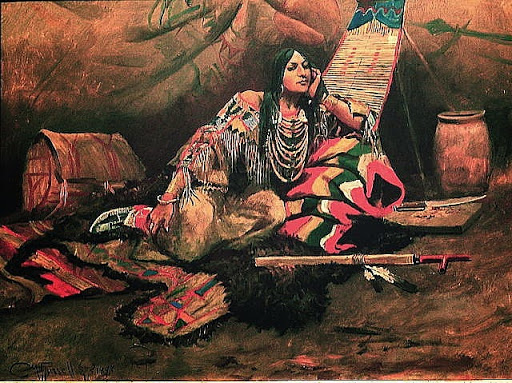 I treasure a glimpse like this of a squaw, standing on her horse to survey the landscape, again the landscape is the Montana high country, rough sage and what one finds just before the Rockies. The land gets higher and rougher with each divide you cross, from the Mississippi west.

The travois was the accepted transportation as the Indian had no understand of the wheel in construction like the Mettis of Canada. 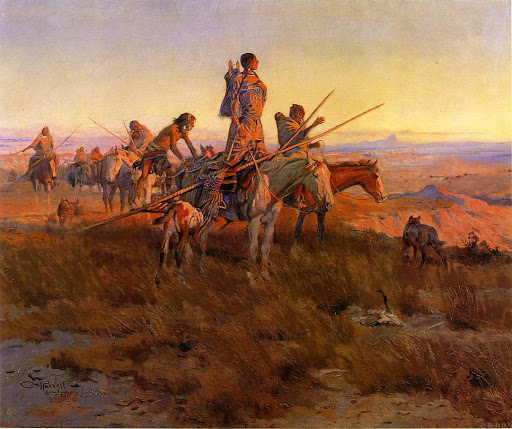 I always like looking for details.  How the fire was built, how the camp was laid out, how the chuck wagon was position, and eggs on the Dutch oven, which is would seem a luxury as chickens were not a common  thing, except in bobcat and coyote guts. 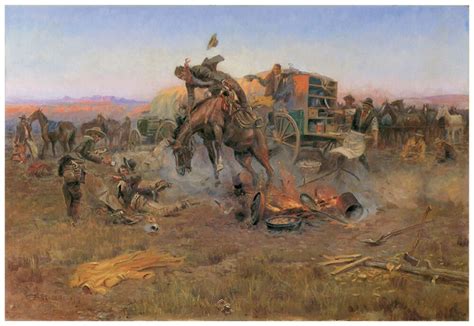 I recognized this painting as this is Buffalo Bill taking the first scalp for Custer after the Little Big Horn. Maybe this is Russell's work or not, but it certainly aided a no name in 1877 to be painting the killing of Indian terrorists by White Plainsmen. Again as Russell moved to the non dangerous Indians he got wood over the squaws.

The last which I appreciated was the buffalo crossing one of the big rivers in Montana, probably the Missouri. These scenes will not come again until the evil is vanquished upon the plains.  The herds will expand providing Donald Trump stays in the second term and those Goddamn murderous wolves are all shot out of the American West again. Can't have wildlife if the big predators are killing everything that is worthwhile in the animal kingdom. 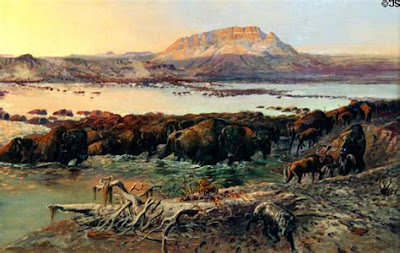 Time to stop playing and get back to work.  I would that I was on horse in that country.