Vikings of another Colour 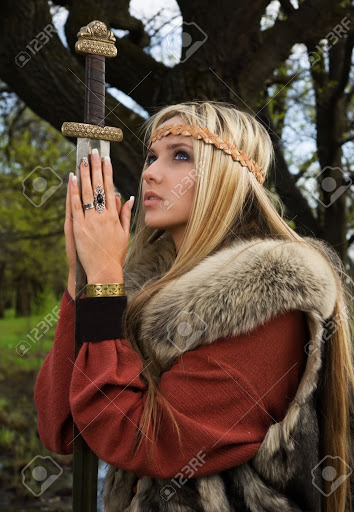 Víðarr give my sword strength that all I meet in combat
I will send to Hel to judge without their scrotum which I
will sew my wedding dress with as a chaste virgin.

This allows me to say thank you to the Viking for Viking things and to pass along that Debbie is praying for all of us in this one peaceful Lame Cherry family looking out for each other.

My accomplishments today were knowledge. Tore apart a carb for an M, and I learned that the experts gave me the wrong parts, and learned that it is going to have, a part two, as millionaire owners of indestructible things finds ways to make even stuff my old man could not stop running......have it stop running. We got the engine going. Sounds good for the few moments it runs. So back at it next week.

Last night something really bothered me. Years ago our vet C sectioned a calf, as the cow was dying of kidney cancer, and he took the calf home and his little girl raise her for a 4 H project, and in a trade we got her back, and I promised she would die on the place as I would not sell her.
I have been fretting about her being old now, and getting thin and figured she would die this coming year. Last night when we got home I spotted a cow laid flat out and knew it was this cow. She was alive yet, so we walked out and she had pushed shit out, her rectum out, bile and grass liquid was coming out of her mouth, nose was frothing, so TL said I should put her down. That means drawing an imaginary X on the skull and shooting the cow with a 22. To which she breathes some, eyes flitter, she moves some in spasms and her heart beats its last minutes as blood comes out of her nose.

Most people call a rendering truck which picks them up, and ends up in pet food, but I drove out this morning with the pick up and prayed the Angels helped me pull her behind the stock dam, and away we went with her head bouncing.

God works things out, as when I turned the cattle out yesterday, she was standing there calm as usual and I petted her head and thought nothing more of it. I never knew I would be killing an animal that I considered a friend and am going to miss that cow immensely. She is in Heaven waiting and for that, she died in a green pasture with people who cared. This stuff spooks me as I know God has been putting people down for the past few years and this cow being taken out means things are coming which God has not informed me of, but I know the signs of His Care, and I will trust in the Lord.

It is just more shit of the shit in life, and I hope and pray Jesus comes back sooner than later.

As a caveat I listen to Escape Club, and like their Wild Wild West best of album as I have it. Not so odd I like the secondary tracks better like Longest Day and Jealousy. Had a dope head idiot tell me years ago that the lead singer committed suicide. I looked it up, and he is still alive.  Hattiesburg Mississippi dumb ass twat for information and everything she said was wrong or a lie.

We have been watching Miami Vice. Dope heads really liked that show. I like the music they do have, and is why I was trying to find some more songs to burn a 12 rotation on a CD, but I had on Ted Nugent in Wang Dang Sweet Poontang (Nashville live version is the best cut) and his Street Rats from Free For All, but that is just too blues driven for what I was listening to. I think Joe Cocker with Unchain My Heart is perfect, and he does the best version I think out of  them all, but I like the Nobodys in The Gang On Fortune Hill too for this set. Picked up Roison Murphy in The  Truth as that is a great song minus that damn rap shit at the end, maybe I will edit that out, but still looking for 8 songs and maybe Vice will surprise me, but that show us bad. Did enjoy the great John Glover in a guest spot, but again no tunes for what I needed.

I guess I should close this down as I have to do dishes, feed kitties, check things, shower and then settle down for more Vice which I only hope they have a song which I can use that I have not heard previously.