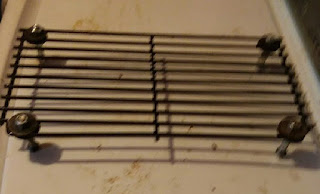 The premier outdoor book of wilderness, off grid or meltdown survival is On Your Own In The Wilderness by Colonel Townsend Whelen and Bradford Angier. I have read that book numerous times and studied it. Our sourdough starter comes from this book and is named Dudley after the Canadian who explained the simple wild yeast recipe.

There was nothing fancy about the equipment these men used. It was the kind of nothing that all the normal people had around, like a tarp, a shitty Sears shotgun and a homemade packboard. Whelen never cut wood. He would start a fire, drag up a log, and put it on the fire and let it burn through and then put the log on the fire again to burn through. Cutting wood is a bitch and splitting it too, and if you are trying to enjoy yourself, letting fire do the cutting is a great deal more pleasant.

The reason I like the how to of this book is it is proven by men that actually lived this without electricity and enjoyed it. The cooking was a nesting kit of kettles, and the grill was two quarter inch rods about 18 inches long, that you sat on top of rocks or wood, and sat your kettles on them to warm the food.

That is what has been puzzling me about the barrel stove in the cellar is the internal cooking on coals. I have used tinfoil in wrapping lobster which was on sale and I WILL NEVER BUY THAT CHIT AGAIN, even if they turned pretty red and they cooked as planned.
For pork chops and steak I have used a Chinaman cast iron pan, which again gets sootie on the bottom, it  has to be small enough to fit through the door, and I discovered after round one that I line the skillet with tin foil as it makes washing dishes easier.

It all worked ,but I was not getting the smoke flavor I wanted off the coals.

I told TL that we needed to visit the salvage yard and get some kind of light grill thing, and in mud and water, we found one, covered with the stinkiest oil. It was the right size and that meant the legs had to be made, as steel rods have nothing to sit on and that is one more thing to deal with.

Legs I know from experience bend. They always bend. If  you make fold ups, they fricking are uneven. I was thinking on it, but not too hard when the Holy Ghost said, "Used bolts for the legs and that sent me off on this project which turned out like this.

The entire thing is like 2 inch bolts, two washes on each to bridge the grill spaces, and a burr on the top and bottom to lock everything into place. This grill is quite heavy, and the bolts make it heavier. I would not want to carry this thing into the mountains, but I'm sure it is quite robust and will work wonders on grilled beast things like salmon fillets, and all manner of steak.

I will put tinfoil on the grill to keep it clean, poke holes in the foil to let things drain which increases smoke which produces smokey flavor, and spray oil on the foil to keep things from sticking, but  this will work for TL and my, steak to share as we always share.

These barrel stoves have a great deal of potential. I can get a quick burn out of soft and semi hard woods, in two burns equal a glowing ember bed which cooks just like Whelen and Angier says it will. My method is just different and might be a Lame Cherry exclusive as I do not know of anyone else cooking inside their woodstoves, expenseive soap stone or barrel. This thing when hot cooks fast. This is not a throw things in and go text your 5000 personal close friends. This is a fast cook on coals just like a charcoal high heat of about 7 minutes for a medium rare steak, which is what I shoot for.

The situation is when it is winter, it is cold. So it takes more to light charcoal outside. It takes longer to cook and that damned snow and wind makes grilling a problem at times. Being able to use the barrel stove inside, saves me a world of time, and a 1/3rd bag of charcoal, as I have coals going anyway, and I can usually time a burn at around 4 in a single burn to 2 o'clock if I'm heating the house to get the right kind of coals I use for cooking. It just simplifies life. I'm certain I could build a saddle for this stove and cook on a flat surface top if I wanted to. The point is to get things built before the world melts down and the power is off. I honestly believe everyone should have one of these barrel stoves completed in their garage and just sitting there in case something happens, and that means the chimney pipe hooked up too, as the last thing you need is to be outside firing things up in the rain, and all the wild dogs and wild people smelling food cooking and coming over and taking it.

As I'm redundant, I will probably build a few of these as spares as you can never have enough spare things.

If I was building for travel, I would go with 7/16th inch bolts and washes that would not allow the burrs to slip through, and big enough for the grill to make the legs. I would go with nothing longer as they would hook up on things, and some bright jazzbo would think about unscrewing them for transport, and the lose the burrs and have a nice 3 legged disaster. I made this to be simple so nothing goes wrong. I sat a Mirro pressure cooker, a big on on it, and it never budged a fraction of an inch, so this will get the job done, as long as a cow or some stupid does not step on it drunk.

That about wraps up the million dollar survival knowledge.

This has been another Lame Cherry exclusive in matter anti matter.