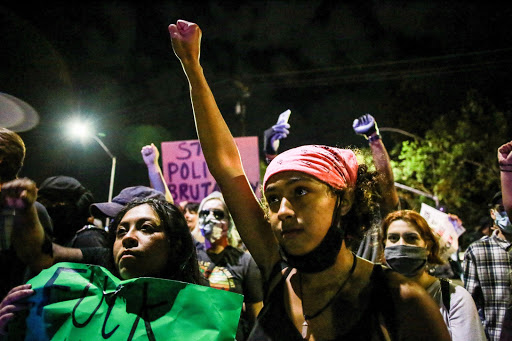 We had a very trying day in steps forward and steps back. Thank God I did not get killed when the burrs fell off a tractor front tire. Another impossibility.

I wanted to share two notes from the Lame Cherry family. The first was the Viking and I burst out laughing at his on the ground reporting, because White People in the Twin Cities are living in an insane asylum.  I read there was a George Lives Matter zone where some races are ordered to take the back seat in the bus. What makes me laugh is there are actually people, sado masochists who apparently in forensic psychology, get off in not being humiliated in sex, but being race humiliated. There seems to be thousands of these freaks, as they get race erections in being humiliated.
I liked the part of the Viking could hear the nightly ransacking of the police headquarters. Yup Capitol riots are to be hunted down but the FBI stood down on all of these riots.

I just stepped outside for a smoke, and the mob must be assaulting the Brooklyn Center police station again, because from over a mile away I can hear their raucous, mad-dog chanting of “no justice, no peace” in memoriam of the funeral of the stupid, stubborn Wright kid, with a volume a rivaling football game. We really need the Presence of The Prince of Peace as the only balm applicable. At least they aren’t flying the helicopters!

I wanted to share this letter from from PB, as he gives some reminders and some great online outlets to listen to and read. This is basically what is left of the free media or enough of the media which is still producing information to keep people from the abyss.

I was flattered by your reference to me as Lame Cherry family.  From what I understand, you are quite occupied with preparing, which takes an enormous amount of time and energy. I'm right there with you... it's endless. Going through major maintenance on vehicles, haying equipment, expanding the gardens, fences to put in,  etc.)  It's getting non-stop busy as I learn more and more of the dire future at hand.   I live in Maine.  You and TL sound like you'd be wonderful neighbors.  It would be a privilege to someday make your acquaintance, should circumstances permit.
I've been working from home for about a year now (saving 2.5hrs/day), so it has given me opportunity to listen to videos on the web (Mike Adams (health ranger), Brenden Dilley, Greg Hunter, Dr. Vernon Coleman, Sherri Tennpenny, and others) while I work, which leaves time for reading several informative sites in the evening (Lame Cherry, jimstone.is, ann barhardt, TheBurningPlatform, (and now) Rense, etc).  I'm wide awake.  I think a lot of times I know the answers to my own questions but throw them out there to make other people think about situations they may be put in where they may forget to consider the deeper consequences.
Thank you for the reference to the Almighty.  You are, of course, correct.  Prayer.

Thank you for everything you do to bring light upon the darkness.  These are going to be very trying times, I believe... and all I wanted to do was retire in peace and enjoy my piano and some restoration projects.  Now, I'm striving to build a self-sustaining homestead.  What a turn of direction.  Greenhouse.  We will need greenhouses.

I would add, maybe scrounge salvage yards or buildings that need to be torn down for supplies as wood is costing gold now, and I got my window patio doors for our cold frames, from the Junk Yard Guy. I just need to build them, but as PB relates, there is not enough hours in a day. Today we "wasted" a day, in getting the tractor we just got, driven 3 miles to a relatives who can fix it cheaper than what the dealers will.  He will get it figured out as it has has stumped him in what is wrong as carb has been gone through, the governor is working, and it has spark that jumps an inch and we still have the problem of it quits. He mentioned intake valves and I think that might be it, as freezing to death in this wind, the tractor seemed to run a bit better. Sometimes old things just need the shit run out of them to get things working again.

Both of these Gentlemen mentioned prayer in the latest post as part of the treatment. I was explaining the same thing to my cousin today as she was saying this was an energy thing and not a virus thing alone.

Do not overlook that this is a Spiritual war against spiritual evil which resonates at an inferior frequency. Remember that Jesus overcame the world and can cure anything. I will try and hit the groove to inquire, no excuses by I can barely keep my eyes open at night, I zonk out, get woke up by our cats to do cat things, and then pray some and try to get some more sleep, before another full day.

PS: Our sounds here are BLM, Blowing Light Monsoons, as wind is a constant.