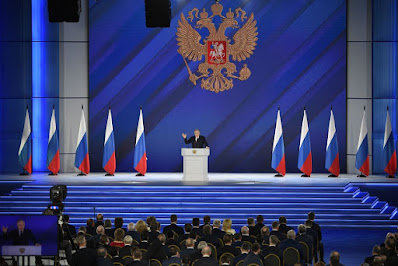 President Vladimir Putin before his Government made a most interesting statement, which has placed him exactly where the 1% controlled Pentagon wants Russia, on a war footing with Europe and the United States.

The focus of this is Ukraine and their Biden McCain Obama Nazis and the United States Obama Biden Marxists. If one reads what Mr Putin stated exactly, it is most revealing, as Vladimir Putin pointedly informed the world, exactly what Americans, let us be clear on this, Americans are going to suffer, be maimed and die in this Biden election theft policy of the 1%.

Vladimir Putin and Russians understand that the Reagan Blue America, that is the vast rural areas of Americans mean Russia absolutely no harm, actually want peaceful relations with Russia and they like Vladimir Putin.  All the same, this is war, and in the kind of war which Mr. Putin has promised, even those who like Russia are going to suffer. See, Russia understands that if they can press the correct stress on Americans, Russia will not have to invade nor use nuclear bombs, as 100 million armed Americans will revolt and hang the pedophile Marxists who are traitors to America.

Putin said threats against Russia will not work.

“If someone interprets our good intentions as indifference or weakness and is willing to cross a ‘red line’ they should know that Russia’s response will be asymmetric, fast and tough,” Putin stated. “I hope that no one will think of crossing a ‘red line’ with Russia.”

What Mr. Putin is promising is a sort of Blitzkrieg of Shock and Awe, with the heinous shattering power like British Bomber Harris incinerating German cities or Soviet hordes smashing German lines and running Germans over with tanks.
Chechnya in what Russia did there in shattering that Muslim terror branch of American intelligence and security assault on Russia, is a small scale example.

I would define this as horrifying warfare. This is what Mr. Putin has promised Pedo Joe Biden. the Pentagon, the 1% industry and the FBI.

Once this type of warfare is understood, the term asymmetrical response is important, as the promise from Mr. Putin is to use methods to exploit the weaknesses of the United States, and to fight in new ways as profound as the Japanese using carriers to strike the United States to usher in World War II.

Mr. Putin has promised to cause havoc and chaos in America.

Asymmetric warfare can describe a conflict in which two belligerents' resources differ in essence and, in the struggle, interact and attempt to exploit each other's ...

The 9/11 terrorist attacks and the war in Afghanistan are among the best-known recent examples of asymmetric warfare: conflicts between nations or groups that ...

Asymmetrical warfare, unconventional strategies and tactics adopted by a force when the military capabilities of belligerent powers are not simply unequal but ...

I believe Mr. Putin as his word. I believe Mr. Putin when he shuts down all warships for 6 months in their Black Sea, that this is the Russian window of today to November as their war window. I believe Russia has assessed what parts of American supply to remove, perhaps shutting down the metro state electric grids where all the Biden election thieves reside.

Russia has stated in their President that they will fight a war with Ukraine and the United States, without using their military. That would mean sabotage, proxy and cyber.

This is important to comprehend. What if Russian Speznat have operations not against Americans, but what if they hit all thee American assets like your toilet paper in Mexico? None of us know and that includes the Biden Obama Bush Clinton police state what Russia will engage in, until it happens.