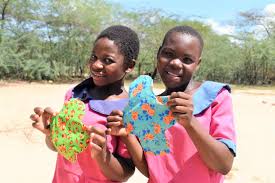 So my cousin broke the lockdown having gotten the vax, and went out with the couples. Couples seem to always have other couples which annoys me as one couple is always not the person you want to ever be around, so you sit there mind numbed wondering why I'm doing this couple thing, but then the singles are always trying to break up your marriage so being married is it's own special prison that drives people to adventures in dining.

So my cousin is out, and on the rag and she goes the bathroom and having tucked  a mini pad in her waistband was ready for the dunk, when she looks down and no pad. She checks the door, and it was not there when she raised her hands, so he goes back the dining area, searches, no pad.

She sits down, checks under the table and no pad.

Her girlfriend asks her if she lost something as when she was away, her husband spotted something drop from my cousin, thinking it was her wallet, strode over and immediately when woke male in Blackness in his hands went up in DON'T SHOOT MODE, and he backed away as he was not touching that thing, as he had no idea if it was my cousins or another womans.

She told him that he knew she was having her period, but his response was, "You and all the other women in the world".

So there the maxi pad lays, and out comes the bartender who sees it, picks it up, examines it, has no idea what the thing is, and walks back over to the bar and throws it away. My cousin is not frugal in she did not go over and dig in the trash to get the perfectly, packaged but well fondled maxi pad or mini pad or whatever pads she is using in being green.

Apparently except for that incident it was a nice couples night out. Personally, it would have been just as nice if they had stayed home, my cousin grilled steaks and if a pad fell out, it would just lay there until the cat tore the hell out of it in playing or the  dog ate it. It is a shame in wokeland to waste a good sanitary pad. I'm sure that women in Africa are dripping because women in America are not using their sanitary pads properly in knowing that millions of women just stuff corn stalks or rice shocks down there and that feminine itch is from chaff not from, well things not spoken of in polite company.

So now you have learned something. Women's periods and gun violence have two things in common. Husbands with hands raised in DON'T SHOOT, there is lots of blood, and we will go trio, in if you do not secure you tampon in your holster or your gun in your waistband, it is going to drop out and cause problems.