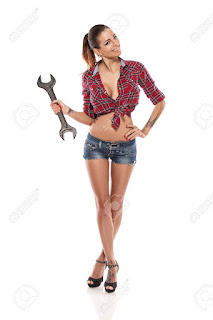 As another Lame Cherry in matter anti matter exclusive.

Awhile back I posted on here a fix I found from some dumb old bastard on Gaytube, which I thought was just the thing. It was putting in a vent into gas cans which now have none. The old duff said drill a half inch hole, and then pull through a tubeless valve stem and it will vent wonderfully.

OK, I did that and it pulled like trying to birth and elephant through a mules pussy. But I got it done. Tried using oil.........and gee the rubber dissolves.

That is what I learned as I left my two gas cans with my new fix in the shed, and when I came back, one of them was missing. I had no idea what happened and cussed myself for knocking it out. That is not what happened as what took place was the gas fumes caused the rubber to swell up like a bloated fish and the rubber got as soft as rotten meat, and I was left with 3 bucks shot in the ass and for me three dollars is still money as I do not have anything, so I was really perturbed this asshole had put that up and it was a failure.

So I looked for a solution as I now had a gaping half inch hole in my gas cans letting in rain and dirt. Great idea there.

We tried chemical plastics and plumbing shit, but nothing is threaded right and all I could find were things that needed even bigger gaping holes which I did not want.

That took about an hour of wasted time.............so we went back and took another hour and I was pissed as I could not find jack or this as plumbing threads are not normal threads.

So as I was digging through the drawers, I came across something that looked functional, it is the drain cock off a radiator or carb. It had threads, and when being pissed off I found some nuts off some other plumbing chit that worked, they went onto the drain cock and I was closer than I thought.

Still too much space, so I got two washers which would go on the inside of the gas can, along with the nut.

TL was mystified how it would all hold together, and then came out the SHOO GOO, some synthetic glue which dries fast for shoes, and I bonded the washers and the nut together and they stuck. You can see God's genius in action in the Lame Cherry exclusive photo below. 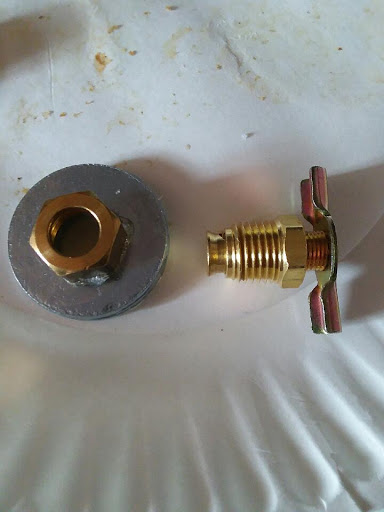 Here is the gas can with the half inch hole drilled in it, due to prior head up the ass directions by the geez. The thing is God was really working on this big time, as He was doing things I did not yet conceive, in when I tried to put in the drain cock, it would not fit, was too tight, but I could screw it into place. The plastic is thick enough and when you make certain it is straight, the drain cock's threads thread threads into the plastic.

I finished turning it in with a pliers, but not over turning as I did not want to strip things out and be back to a big gaping hole. 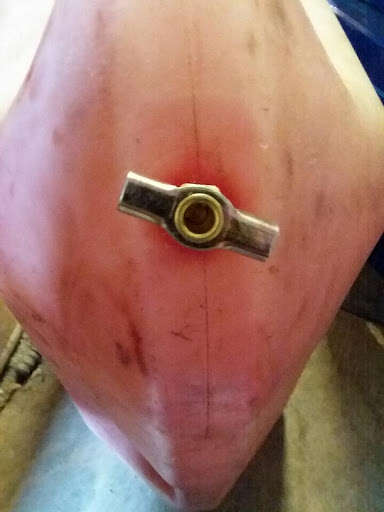 This thing actually works. I'm going to be careful in not letting any jackass kids use this to break it or some damn Darwin tard, but this is perfect for what I needed. It is brass so it will not spark, and it seals tight and opens easy. This is my God given fix and I'm delighted.

I put the washers into a bag in case something in the future makes them a necessity, but the plan was to run a wire through them in  U shape, pull them up to the drilled out hole, put Shoo Goo on the washers, and glue that into place and hope that it held long enough to screw that drain cock into the nut. Otherwise there is probably something out there for getting around angles or some socket I could mount on some flippy cable. I never got that far as God has this fixed in the easy way, instead of TL and pissing around for a half hour gluing these two into place.

I have a few more cans in need of vent holes, so will check the salvage yard first, as these were 4.25 each ,but that is cheaper than 3 bucks for things destroyed in days.

I should have a Gaytube channel for projects but I would tempt too many people in how attractive I am, and besides I doubt any more people would donate than they do here in life saving information. All of this pisses me off and wears on me, as every time I want to do something, I have to invent the wheel, especially after some genius shows the wonder fix  which has me wondering why I ever believed something too good to be true could be true.

Have to show this to JYG as I informed him the tire valves sucked and he nodded in agreement.