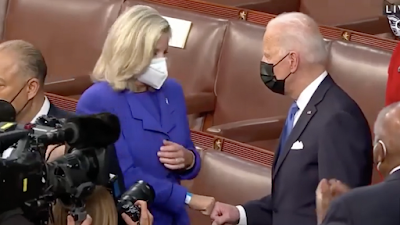 The problem is Congressgende Liz Cheney, Joe Biden is a sworn enemy of thee Americans which you claim, starting in Wyoming, to represent, who trusted you on the word of your father, Dick Cheney, who swore he was a Conservative too, and has not said one word about election theft, Americans being framed on January 6th and made you a fortune while Americans were impoverished by Bush Chinese profiteering.

Look on the Bright Side, GOP, Maybe the Raid on Rudy Guiliani will turn up Dirt on Hunter Biden.

Jan 8, 2021 ... The wanted poster, which was released by the FBI's Washington Field ... mob rioters they are hunting down after they stormed the US Capitol in the ... from some Republicans that the group were posing as Trump supporters.

Apr 2, 2021 ... How America's surveillance networks helped the FBI catch the Capitol mob ... They illustrate the power law enforcement now has to hunt down ... grip on GOP looms as support falters for independent probe of Capitol riot.

Pedo Joe is at war with Americans, and Liz Cheney agrees with that hunting down of Americans.

Jesus was betrayed by Judas in a kiss. The reality is Liz Cheney is not betraying Republicans with a fist bump, because she does not represent Republicans.