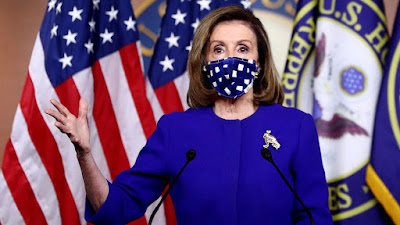 If MAGA would have touched my tampons, I would have launched
nuclear missiles as what is mine is mine!

Man that Speaker Pelosi must be hell for wheels on the FBI in calling up Director Christopher Wray at all hours and bitching him out over her missing laptop, as what took place in Alaska in the hunt for the laptop is just bizarre.

Pelosi: ‘I Will Never Forgive the President Who Instigated the Insurrection’ – True Pundit  ∞ truepundit

I honestly feel sorry for the FBI Agents and the DC Cop who were sent to Alaska to raid the home of a couple who own some kind of spa, as this is not just going down the block for a taco and heading home to the office. This took hours and days to set up, and 12 agents and one cop, wasted hours at this couple's home, taking the Constitution with them as evidence along with other electronics.

What apparently happened according to the Hueper's is that the wife resembled the gal from Pennsylvania who took the laptop. Yes the Huepers were in DC, but left and never entered the Cap. I will apologize as I thought the FBI caught the woman and had her in custody, so why don't they just offer her the Hunter Biden plea deal, in she gets to teach at a college if she gives the Speaker's laptop back.

https://abcnews.go.com › story
Jan 21, 2021 — Williams allegedly stole a laptop from Pelosi's office during the siege on the U.S. Capitol building on Jan. 6, according to federal court documents.

The FBI didn't recover Nancy Pelosi's laptop from the ...

https://www.inquirer.com › news › riley-june-williams-...
Jan 26, 2021 — The FBI didn't recover Nancy Pelosi's laptop from the Harrisburg woman charged with stealing it, her lawyer says. The fate of the computer has ...

We know that Nancy Pelosi is a drunk and she apparently scares the hell out of Wray as this is a top priority, over the well trained pipe bomber which the FBI can not locate. This looks desperate in long shot chances in holding people in cuffs who look like someone else. It makes me wonder what in the devil is on Pelosi's computer that she is raising hell over it yet and more to the point, what is on the computer which Wray has been ordered to find.

That is what makes one wonder if Pelosi's laptop does have things on it, which are criminal, involving setting up January 6th or selling out the United States. It is just a laptop, not like the information is not on some other laptops, so why spend tens of thousands of dollars looking for a laptop, which only had presentations on it.

OK so I started searching what this was about, and the WashPo wrote that this 22 year old woman, who is lesbian HOT, I mean she will do well in prison, but that is besides the point, as the FBI says that this woman had help in stealing the computer. No it was not heavy, but apparently men were in the room too.

Riley June Williams charged with helping to steal laptop from ...

This is the quote:

Law enforcement soon obtained video clips that W1 said were recorded and live-streamed by Williams, then captured by a friend, according to the amended affidavit filed Tuesday. One four-second video captures a female voice — which an agent believes to be Williams — saying “Dude, put on gloves,” before a black-gloved hand takes a computer from a table. A caption across the clip says, “they got the laptop.”

So Dude put on gloves and stole the laptop. Dude is not a skirt, so why are the women being cuffed and frisked when the FBI knows it was a donger. It must be because they don't know who the hell this dude is, which seems impossible and no one is saying who Dude is, as Dude has the laptop and in this is the real paradigm.

Now something is on this laptop which has Pelosi in drunken rages terrifying Chris Wray. Wray who is swamp state is really interested in this laptop for the content, more than Hunter Biden's. That now makes one ponder if this Dude, as there were lots of FBI paid people undercover there, was maybe someone else not in the FBI, in Dude may be a foreign actor, like Israeli Mosaad.

If not Mosaad, the question is does Dude have this laptop yet. See I run old computers, but I thought I read on Windows 10 that they can activate that spy platform and track computers, faster than cell phones. The FBI should have been able to ping this laptop and they have not. It appears someone ran like a raped ape to Pelosi's office and from what I have read the Cap is not that easy to get around in, unless you are Ashli Babbitt, being directed to get shot by some undercover operatives as the cops stand around and watch.

Anyway, Dude must have pulled the battery, so it would not track, and that is prior planning. It would mean Dude got it the hell out of the area, and has not accessed it, because if this computer links up to the internet, it would leave a signature to track. This computer was either destroyed or it is somewhere as a bargaining chip like Terry Nichols with the bomb making materials the BATFE provided him, or this laptop is in the hands of a foreign power and is going to be used to blackmail the United States Government.

As no Seth Rich has been murdered yet, this laptop is out there and the FBI  thinks is a bargaining chip for an arrest.

Hunter Biden said the Jews have his other computer and are blackmailing America for whatever Jews want.

Jan 18, 2021 — Williams “intended to send the computer device to a friend in Russia, who then planned to sell the device to SVR, Russia's foreign intelligence ...

Yeah I wonder about this Russia story as in one story it seems the source for the charges were a former lover, and people not getting sex anymore from hot women, tend to make things up that the FBI wants to hear.

Apparently the woman was let loose, I suppose the FBI thought she would rabbit for the laptop and solve the case, but as she has not, that means Dude is the person, but apparently no one knows who Dude is and why Dude was working for.

Maybe like Q it was the DIA and the DIA is blackmailing Biden Pelosi and Obama for fun things like nuclear war. This is the problem with this klusterfuck of DC, in like the Kennedy event, everyone is dirty, so no one calls the cops, the population is being hunted down, while the real story are the players who used January 6th for their own agenda to put the screws to those in power to get the additional goodies the DIA or the immortals desire.

So in the rat maze, almost a half year after the event, we know that Nancy Pelosi is bitching at Chris Wray, who has the FBI getting grey hairs looking for this laptop. We know they are not looking for a Dude, as they are cuffing women look alikes.

The Speaker is hell for leather in you apparently don't violate anything that is Nancy's. Must be hell being her husband in she must spend hours inspecting the toilet paper roll to see if her husband has used it.

Those are all the observations I have on this in published stories to glean a view of what is going on really. Then again, did Nancy Pelosi as she was setting up AOC for an event, deliberately leave her laptop out for ANTIFA or BLM to find where she left it, to occupy the FBI until the big crackdown comes.

....and the big crackdown is coming.