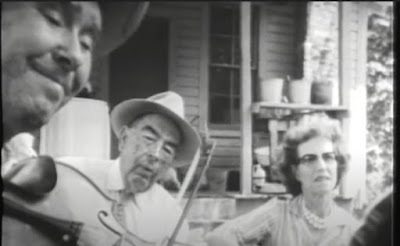 As America has been deliberately vanished, I wanted to share something which has been the hatred, the target, of the 1%. You know them as mocked characters in Hee Haw, Green Acres, Beverly Hillbillies, Deliverance, Andy Griffith and Gomer Pyle.
You now them as the "folks" that Birther Hussein condescendingly mocked and the metro peoples relished the remarks as they hate flyover country American People.

When Andy Griffith brought Jim Neighbors to the audition for the show, the execs did not want him as no one could be like that, and Griffith told him, "No down in North Carolina there are allot of old boys like him".

This has been a ridicule and joke. It does not matter if this is the Blue Ridge, the foothills of the Rockies, West Texas, the Bayou, upstate New York or the plains, all of these regions have these People in them.

The documentarian who posted this video, spoke of the genuine good nature of these people and they are ALL GOOD PEOPLE.  They look like comic book characters at times, but God has blessed them with geniuses and virtue which made America into what it was, before it was destroyed by the 1%.

The one thing that brings righteous indignation deep in my Spirit is knowing how all of these people have been abused, misused, mocked and discarded. They are looked down upon with scorn and are hunted down with ridicule, but there is more virtue in one of them than in all the major cities in this world.

There is a saying that when the last human is dead, a coyote will be there howling over their grave. That ain't going to happen as once this shit storm consumes itself, it is these People who will be what is America and Americans as they will be the remnant which survives, just like the did coming out of Samaria, out of Asia, out of Europe.