A Written History of Struggle 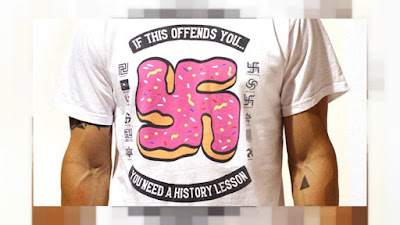 I am reading a Jew history of the Nazis from the 1980's in a Jew who came to America and got a great job named Shirer, but the problem with this kind of history is that no matter how much he claims to be balanced, the prejudiced and bias creeps in. The woke of the day will say, "Yes but this is Heir Hitler, so he does not deserve any kid glove treatment", that is not the point, as the point is, this is history and judgments are being made, and the only way one can understand the present events is to have an honest assessment of the Reich years.

My focus in this post is on the woke present, as Shirer is biased in the Jewish propaganda against Germans manifesting in the 1980's. His propaganda is that Hitler and the Nazi's wanted to do away with usery or charging people interest on money which Jews established all through the world in Ashkenaz banking.

President John Adams wanted to end usery in America too as did the Founders. In the Bible, usery is not condoned by God, so in this case the Nazis were actually not preying on humanity and were in the company of an honest God and honest men, who did not want people or nations to become debt slaves.

This goes much deeper into our world present in trillions in debt, held by the lenders and annexing nations. It is the the reality which must be examined from the Nazi perspective of Greater Germany.

In Hitler's vision, Germany a most robust people who numbers 40 million, were to spread east to the Slavic and Russian lands, and number by the 21st century, 230 million Germans in a dynamic Greater Reich, In the Hitler / Darwin understanding of history, those more adept peoples were to overtake and populate areas because it was the natural order of nature.

Examine this from the Anglo Saxon Prince Phillip who wanted to come back as a virus and kill off humanity as there were too many people. In the 1% and their wokeism, the West is of a self genocide concept that Christian Protestant White and Black are to be erased as peoples from Europe, Australia, Canada and America with Obama smiling at this genocide as Bush, Biden, Trump and Obama generated policy in the invasion of America as Trudeau in Canada, joins Johnson in England, Macron in France and Merkel in Germany in the same 1% in a reverse Darwinism, of instead of the successful peoples inheriting the earth, the working peoples are being destroyed and replaced with ethnic slaves of low IQ to serve the 1% of this global elite.

As this is the 1% in the West manifesto, in the East, the manifesto is the 1%'s China setting lose viruses which the 1% made from Obama Wuhan labs to kill off Westerners, as the Chinese are promised to colonize Australia, United States and Canada. Just so you understand this, the 1% of the international order is engaged in erasing White and Black Protestant Christians and relishing the idea of plagues as Prince Phillip and Bill Gates get erections over, but at the same time, the 1% is advocating for the Chicoms to fulfill the Nazi dogma which we have been told was vile and evil, and never to be repeated again, in the mass murdering of Canadians, Australians, Anglos, Germans, Scandinavians and Americans.

The point is, it was condemned by Franklin Roosevelt, Joseph Stalin, Winston Churchill and Charles DeGaul what Germany engaged in, in using weapons to attack other nations, enslaving them and then moving to colonizing those peoples. Yet in America, Australia, Canada and Europe, we have witnessed wholesale invasions of slave labor, the criminalization of the native White and Black Peoples, Covid plagues and deliberate spreads, with the police state hunting down the native populations, for the voiced Peking manifesto that once these nations populations are reduced, the Chinese will appear to take lands, properties and colonize what is not their lands, as the 1% has set about this policy.

Hitler promoted Germanics, but in each of these nations the Saxon peoples are being obliterated by making them criminals, infecting them with virus and inflating them to slave status, to be dealt with, just as Jews were put on trains and transported to new work situations out of their ghettos, once sold by their elders, the same leading groups of the 1% engaged in this international policy.

We are watching the leaders of the Europe, Canada, Australia and the United States cull their populations by design an the Chinese are involved in this in having been promised to colonize and rule the world. In understanding the 1%, from the aristocracy to the Ashkenaz banking, they are not going to allow the Chinese to sit at their table nor be dictated to by orientals. The logical conclusion of this is just as Japan, Germany and Italy were allowed to install their own Darwin political sphere, which in turn would be moved due to lack of resources to attack the "Allies", is that the weakened West is bait for the Asians to advance and attack with the promise of global domination, as Hitler envisioned. What awaited though was treachery in the German Reich, weakness in Italy and a Japan which had lost the war before it had begun. If one projects the Prince Phillip virus, the conclusion is Protestants will be wiped out as 2/3rds of the populations in the West. The 1% has in reserve logically it's own super weapons of mass destruction beyond nuclear and biological weapons and will deal with the Asian hordes as so many insects to have pesticide used upon them.

All of this is being set up, and unless one examines without bias the understanding of the Nazis and Fascists of the 1940's, one is blind to what is being repeated in this 21st century as promoted policy by the 1% for China. The Chinese are a very easily manipulated people as they are filled with bias and prejudice and if one tells them they are dominant, they believe it and will cut their own throats in arrogance. That is why the 1% chose them for what is manifesting.

This blog informed Donald Trump that China was the problem and that Russia was the nation to make peace with. The Lame Cherry has been proven correct again. Time has run out though as China is surging forward with it's Yellow Road domination of the planet, which is doomed to fail for the Chinese are a retarded intelligence, not capable of Inspired thought for invention and are so criminally corrupt that ideas they steal from Russia or the West are failures due to shoddy workmanship or their inability to advance the technology.

We are deliberately being driven to the mistakes of the past, and this time the slaughter is of the Saxon races for their Spiritual competitor status and the devolved Chinese which the 1% has judged expendable.

This is the Lame Cherry in matter anti matter exclusives.