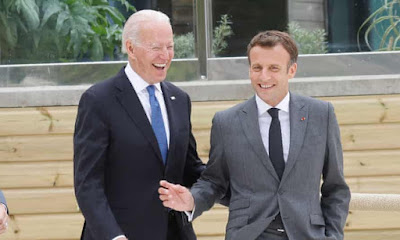 It was a quick dish Joe, fast fried 160 million Chinamen.

The French with Japanese ownership of Westinghouse, built a pair of the biggest nuclear super reactors in Guangdong China, in a revamped design of a high pressure reactor as the other designs were not feasible.  Barely a year and a half into operation, this main reactor has reached critical, meaning the pressure in the plant is so intense that it is venting to the outside public of 160 million Chinese.

The Chicoms have raised the safety standards in radiation exposure, but that does not negate the fact that there is so much pressure in this nuclear plant that it is venting either on it's own or is being vented to keep this system from rupturing which would initiate a Fukishima in China.

4 hours ago ... French power group EDF (EDF.PA) has begun examination of a potential issue linked to a build-up of inert gases at its nuclear power station in ...

For those who are not aware, the Chinese are having problems with a very large dam made of concrete which in China, concrete is not concrete, but mud slop. This entire nuclear power plant is filled with shoddy Chinese materials. Somewhere inside the plant something has ruptured. The French have been brought in which is a warning sign. Nuclear material is venting to the surrounding area, in the start of a Chernobyl.

One can not just shut down a hot nuclear power plant, it takes a great deal of time and resources. This plant can not withstand the operational pressures it was designed for, meaning shoddy Chinese parts. This plant is in trouble and under the pressures it is operating under, a fracture is a leak, and it becomes a crack and then the world changes in a nuclear disaster.

It would seem opportune that a first strike biological weapon by Obama and Fauci, which has China promised to colonize Australia and America, is small rice paddy compared to a nuclear disaster which can contaminate a third of a billion Chinese, all of their ports and all of their food and warehouses, so no more sales to the world.

Interesting accident at this time.