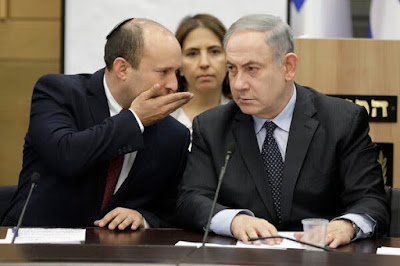 Netanyahu will essentially be replaced by a more extreme, though much less politically savvy, version of himself. At 49, an untested and ambitious Bennett — the first Orthodox prime minister and a former aide to Netanyahu

I was listening to David John Oates on Rense.com in recent reversals and Mr. Oates featured Gomorrah Blinken that fag SecState of Pedo Joe, who bent the Jews over and spread their butt cheeks and ordered them to bark like  a dog.

Just so you get this, the Jews in charge of Tel Aviv are Biden's Jews, chosen by Blinken as Americans overthrow that regime non stop since Bill Clinton started meddling in that nation. So read the reversals closely.

Help Palestinians live - All fear when I thank you

Any arms sale to Israel - This dilemma cooks Iraq

Discuss ways to work together - Was real sex and love

The return of our MIAs - Flowed demonic in

Palestinians told by Biden to recognize Israel - Does he know

Blinken has revealed many things. He forced the Jews to do this new regime. Pedo Joe's policy, and this is NOT Obama's policy as Pedo Joe is taking control and booting the image out, is going to turn Iraq into an inferno. Now whether this is a terror state or Iran nuking Iraq. Blinken sees this policy as Iraq being expendable.

When Netanyahu was ordered to step down, he freaked out. This was a week ahead of anything in Tel Aviv and David John Oates found it.

We must now examine what the new Tel Aviv regime is going to look like as this is the image of Pedo Joe, not Obama or Trump. This is Gomorrah Blinken's vision of the Mideast and I can tell you this is not that Irish skirt Samantha Power nor Susan Rice's vision, because the school teacher they got to replace moderate Benjamin Netanyahu is an Apartheid Johnny. This is Lebensraum Judah. Prime Minister Bennett loves annexing Philistine lands. He is everything Bibi Netanyahu as a moderate could never be. The new Prime Minister is JAMA, Jews Annexing Mideast Again.

Netanyahu out, Bennett in: What Israel's new government means for ...

15 hours ago ... For President Joe Biden, with Benjamin Netanyahu likely out, Israel's next prime minister Naftali Bennett might pose a fresh geopolitical ...

Out, but not down, Netanyahu could be tough opposition leader ...

23 hours ago ... Long the familiar face of Israel, Benjamin Netanyahu is headed to the political sidelines after serving as prime minister for more than a decade.

This does not end with the new PM. This begins with the new head of Mosaad who is delighted to announce that Mosaad is going to assassinate everything that moves in Iran. For those who thought Biden's Nuke Peace Plan was going to amount to Vienna Anything, Joe Biden for all his rhetoric is appearing to be one tough Irish son of a bitch in fag politics. Just look at what the Israeli Defense Forces announced in blowing up Gaza is just the first step as the Jews under Pedo Joe are going to be giving blowjobs to almost everyone.

Look at the details in this new regime, where Benjamin Netanyahu is now the MODERATE opposition leader, whose moderation leveled Gaza and blew up Syria and has sworn to nuke Iran. That is Bibi Moderate. Bennnett is the leader who finds that moderate and so does his IDF and Mosaad Tel Aviv is going to implement far lethal effects than what former PM Netanyahu ever dreamed.

The major clue in this is Pedo Joe's, Gay Republican in John McCain's former house boy, Lindsey in the gay ear Graham, went to Tel Aviv and praised blowing up Gaza to which the Jews and the DEMOCRAT LED CONGRESS, are engaged in America offering another billion dollars in Iron Dome replacement missiles, because in Gaza the Jews used up their supply.

Are you connecting the dots on this? Gaza is a first step. They are being rearmed which is depleting Iranian stocks. There are only two targets left and one is Hezbollah in Lebanon and the other is the Baathists Iran. Joe Biden signed off on this because the 1% signed off on this. There is not going to be moderation. There is going to be more JDAM strikes on Muslims.

Now before you jump to conclusions in this is a Jew Muslim war, that is wrong. Biden's Jew Crew of Bennett has allowed in to form the regime Muslim Israeli's. Simply point in this, this would be Sunni and Saudi Jew backed Muslims, and this is a blood feud, in the world is divided between Jew Sunni Muslims and Persian Shia Muslims. The Jews and Sunnis have reached agreement with Pedo Joe's laying on of the hands with Gomorrah Blinken spreading the butt cheeks, and this Jew Crew has that good Irish Catholic blessing, which looks like a near abortion of South Lebanon and Iran.

If you note in this, Hezbollah and Iran stayed out of this. The Jews are preparing a greater theater of war and once they get their missile replacements they will cap the Shia. The Lame Cherry reminds you of something again, the Jewish opposition wants to blow up everything. The Tel Aviv regime wants to blow up even more. It is not too difficult to read these tea leaf extracts.

The Lame Cherry supports all of this Gomorrah Mideast as the 3rd Temple needs to be rebuilt, and things get accomplished that Jared Kushner could not get done, Pedo Joe is going to scorch things. Of course this will singe the United States as Jew York City is their fun town. Jesus comes back though after this gets flushed out, so I'm all for it, as He has a list of people who afflicted us, didn't donate and troubled this blog, and I will enjoy hearing an Angelic report on the sentencing and executions by the Lord Christ, as I'm going to enjoy life for the first time.

Who would have thunk and Irish Mic could have fagged his way to Armageddon.

Go Pedo Joe, do your stuff so the 1% gets their potion's worth.