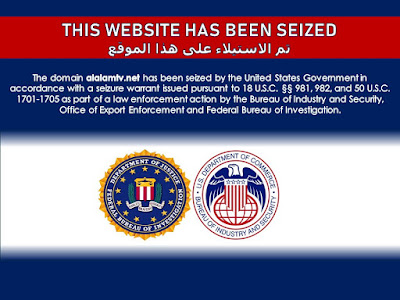 As an American Constitutionalist, there is something in this bizarre William Barr legal findings which allowed Americans to go in and arrest people in other nations for breaking American laws, which are just unjust.

A nation has the right to go to war with other nations, but you can't "Outlaw Hitler" just because you don't like him, but you do like Benjamin Netanyahu blowing the hell out of Philistines and Persians.

The latest in this is Merrick Garland, the US AG, going in and seizing websites under US criminal codes in people who have websites in foreign countries. If this is a United Nations world of equal states which Barack Hussein Obama said America needed to bow to, then America can not do this, and for that matter. Lebanon can start seizing American things that it does not like, probably Jewish banks and whatever Jews have, as the Muslims find crimes in being Shylock Jews.

Going to @PressTV's website gives this message now. The US codes cited are civil & criminal forfeiture and powers given to the US president during a national emergency. pic.twitter.com/XY0WJd1SN6

I view all of this on the George Washington, Thomas Jefferson, James Madison and for that matter all of US history in America was not a place that censored what other nations said. Foreign policy was that other nations ruled inside their borders. If someone attacked America that was an act of war and you made war. Otherwise  America was not a Thought Police State nor did it engage in Internet Piracy.

It is just odd that George W. Bush let Afganies, Iraqi's and Gazans spew all kinds of terror shit, and still allowed them to vote for terrorists, and the world did not end. So with Bidencon, Merrrick Garland is engaged in the exact same crackdowns which the Nazi and Marxist engaged in when they swept themselves into power.

Ronald Reagan changed people's hearts and minds, not by pointing missiles at them, but telling people they had the right to be what they chose to be. If they chose violence, then Reagan would nuke them, but if  they chose life, liberty and the pursuit of happiness, America supported them and the world loved the world of Ronald Reagan.

I have no idea what kind of shit Merrick Garland banned, as most of it is probably British MI6 funded, which is the Queen's coin, but taking away an internet platform changes nothing. All it will do is bring people back to their terror cells, without cell phones to track them, and then the world becomes more dangerous as non shouting terrorists are the ones who start blowing things up.

The Lame Cherry certainly is not for terrorism, but this blog is certainly not for American piracy or thugocracy as the Ugly American Syndrome makes the world dangerous to Americans who have to deal with foreigners in travel or when they come to the United States.

These actions only reveal how weak America has become. The DOJ and FBI set up MAGA on January 6th with their own paid agents and is hunting people down for thinking American things and making them criminals, and now whatever Merrick Garland thinks is making foreigners subject to American laws in their countries.

What was it AG Garland stipulated, that terrorism only takes place at daylight so MAGA was guilty while BLM and ANTIFA were acting out at night, so they were not criminals? Maybe if these seized sites posted only at night like I always do they would still have their webpages as while I do not understand Merrick Garland's interpretations of the law, it certainly works out for the Obama Intifada, so it should work out for the Mideast Intifada too.

Odd how Trump signing that national emergency order could not shut down CNN and have ballots recounted, but Biden with his nuclear shield has Garland shutting down other press sites around the globe under that same Trump executive order.

That Donald Trump sure handed Pedo Joe everything he needed.