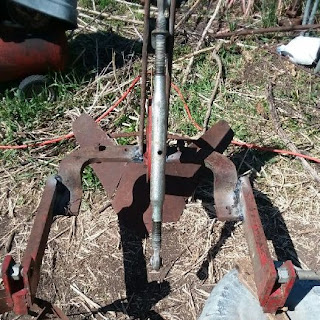 OK I take crappy pictures, but I could not see in the bright sun and that is the excuse.

This though is one of the projects I was working on, since I wanted a potatoe digger and JYG, the Junk Yard Guy, who never says anything as he wonders where in his piles of salvage I find the things I find.

This project all started out with the one piece in the sweep, for those who are not farmers, it is the triangular thing in the back.

Pay no attention to the old air compressor as I need a new of one of those two like I need lots of things replaced.

What my intentions are is for this piece of Cherry Equipment to use it for trenching for onions, beets, carrots, potatoes and whatever else I will put into trenches to concentrate water to conserve it. God blessed our work in that last year, but digging in cement soil was too one foot in the grave so this implement will take the work out of that.

I'm going to run down what I did in God's Grace and what the parts are as this took like 6 months to find things in the Holy Ghost saying that will work for that part. This is built to be used on a 3 point hitch tractor, and no one gets to borrow it to destroy it. This explanation is for those who are looking to build things like this instead of spending the 200 dollars to buy one, as I did not have the 200 for something which was not right anyway.

OK, the red arms out front, are from an International Harvester quick hitch. The arms were like 6 feet long, but my old man cut them off for a two point quick hitch for a 450 and 560 tractor. These were laying around and as I do not have the machinist drills to drill large holes, these with JYG's pins for a 3 point arm bolted in, are the lift and depth setting for this implement.

The International arms are welded onto at 35 inches (This will just fit between the 3 point hitch I made for a WD 45 Allis Chalmers, a worthless tractor which is why I want an IH tractor with a 3 point hitch.) and what they are welded onto is a draw bar which appeared to have faint green on it, and white. Whether this was off an Oliver or a John Deere, I have no idea as we never had those around, but it was in the junk pile I was scavenging and it just happened to be the chunk of flat metal I needed. 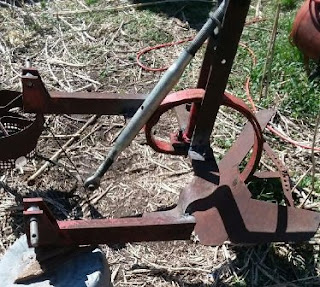 Then came the frustrating part in I needed a shaft or a spring to mount the potatoe sweep to. JYG had none from the old Farmalls and I could not find anything that would work and was resorting to thinking about cobbling something together, when I looked down by the welder this spring and there was an Allis Chamlers spring shank assembly. Not what I wanted, but as you can see it would work.

This was off of an old 4 row AC cultivator. A more worthless piece of equipment ever devised. It was sprung, the bolts Allis Chalmers used along with the metal was inferior. It was just crap, but I welded it on to the draw bar, and that AC metal just melted, while the older John Deere or Oliver metal was like welding rock.
I had to turn up the arc welder to 115 to 125 for the arms and the draw bar, as it just laid beads on top of the metal and I needed molten puddles to penetrate the crevices which were what you get with using metals this old.

So the next step was the 3 point top post, which was another problem in trying to find things, and then one say walking around the other place, I spotted two metal pieces that matched, had holes in them and they were destined for that part of this implement. I had gotten a small piece of metal from JYG for a splitter, but it fit as a brace between the arms, so in it went and the entire frame was completed.

When I picked up the sweep, one of the braces was snapped off. This is odd in it is a U shaped piece that is riveted in place. So to fix this I ground off a chain link of the right size and in eye balling it, put it where it should be and started tack welding it into place.

OK here are some secrets to welding. First, metal is rusty or painted, so the arc will not ground. I cheat in I will resort to tap in the ground attachment next to the metal and will burn a trail across the rust which is burning off to where I want to weld. Saves time as in this chain piece it would not arct no matter what.

Second, my clamp is not that good in the spring, so I usually clamp a Vice Grip onto the metal and then ground the clamp to the Vice Grip, it gets me a good connection in most cases.

Third, like on the arms, I had almost a quarter inch gap on the one, and what you do is with an arc welder is just get the arc going and then once you get that part filled up, you weld back and forth to fill the gap up, instead of in a parallel line. I call it puddling, and I do this a great deal in my welding as the purpose is to get things to hold, and I weld things for the worst situations possible as I do not want to return to the scene and have to start rewelding things.

There is not a pin for the top adjustment of the 3 point. That is from JYG as I found it in the junk. I just had an old square bolt that fit, and that is what will be there. Lastly I cut off the plough bolts that hold the sweep on, as they would not budge, and put on two new bolts and with TL tightened things down and voila, the 3 hour potatoe digger.

I'm probably going to paint it Farmall red, as JYG is always suggesting things need to be painted, when I think old rust color is just as good as anything.

I think JYG charged me about 15 bucks for this sweep as it was an antique. I have seen others online that have metal bars fanning out on the sides which let dirt drop through while the potatoes roll out on top. Will see what God Inspires on that.

I'm really thankful to God and really pleased who this turned out with Holy Angels guiding. It is too much work in having this in my mind for months in building it and figuring things out as it is exhausting.

I will NEVER use this to farm with, meaning this will NEVER be used to dig trenches in hard soil. This is what I will use after the digger tills the land up deep and what will probably appear to dig potatoes out in the fall, as while it is built to take the hard tilling, there is no sense in taking the chance in busting things up. That sweep is around 100 years old. It is stupid to stress things, which is probably what broke the adjustment piece in the back that I sculpted a chain link to replace.

I built this heavy duty, but it will be used for light duty, as you get a sore back from digging potatoes or break handles like an idiot kid, and suddenly you start appreciating things making life easier. That is what this implement is for, to not make my head swim in digging 30 foot trenches in hard soil. We will be able to do in 15 minutes what took us two days of hard labor. That is a good 3 hour investment in welding.