The Doctor Death in the Mengele Mould 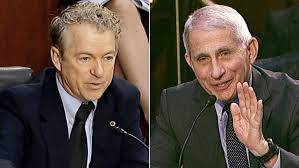 No Senator Paul, you may be a doctor, but I look like the flying monkeys from
The Wizard of Oz, and I'm telling you that genocide weapons are a good thing
for my bank account.

The Virus 'Looks Engineered' Fauci Was Told By A
Leading Scientist, Before Both Of Them Actively
Suppressed The Lab Leak Theory

It appears that Dr. Anthony Fauci is not reading the writing on the wall, in it becomes more clear that Fauci was one of the Obama trolls who spread this virus inside America and used this bioweapon to help steal the election for Joe Biden.

Fauci has the police state Mockingbird machine behind him in CNN, Newsweek etc.., but chinks in the propaganda are once again fomenting in the same way the "Defeat Hillary" propaganda was generated by the DIA for Donald Trump.

Pedo Joe is protecting Fauci, but Fauci is doing himself absolutely no good in being that skunk faced, smarmy, lecturing know it all, telling such bald face lies that even Adolf Hitler would never have said them.

Fauci is a product of the Jesuits, but left the Vatican behind when he was offered a deal he could not refuse. Jeff Rense calls him Fausti and that is to the fact in Fauci sold his soul for power and when the orders came from his humanist (Fauci's religion) of the 1%, to fund a biological weapon in North Carolina, have it shipped with Arabian SARS to the Canadian bioweapon lab in Manitoba for Justin Trudeau to have the PLA smuggle it out of the country to Wuhan China, where more Obama folk were funding a bioweapon lab there, to create a first strike weapon on America, Italy, Spain, Japan and India to bring down the world economic system, all of this crimes against humanity evidence comes full circle, and it all rotated around Anthony Fauci, the #2 at NIH to create this globalist overthrow of freedom around the world.

President Joe Biden isn't bothered by Dr. Anthony Fauci's Republican critics who have called for the nation's most prominent COVID-19 adviser's firing after a trove of his emails made headlines this week.

There is only so much protecting Pedo Joe can give Anthony Fauci, as things are going on beyond Biden's control. Fauci's book is cancelled from Amazon and Barnes and Noble. That is telling as that is the NSA signaling that Fauci is expendable. Pedo Joe in driving forward with the Trump vaxes is antagonizing Americans who are listening more intently to the chorus that the vax has doomed them to a coming grave by synthetic prions raving the body.
Bushman Tucker Carlson lit this fuse on the Fauci Emails in mocking Jesuit Fauci, exposing him as a liar who caused hardship and death in America and around the world. A scapegoat is being created and Anthony Fauci is walking on crumbling ground, believing he still has Bill Gates 1% protection and Obama Biden protection, with the intelligence community which installed Biden, but if you look at the signs of books cancelled, these emails being focused upon is not by chance, but by design and word went out to hype them, because they were damning. Only one source would know this and that is the NSA. The same NSA which told Trump supporters where to look at Russiagate, the same NSA which created Qanon January 6th and now the same NSA which is exposing Fauci.
Someone is painting Anthony Fauci for a reason and he is too arrogantly stupid to know what the signs mean, and those signs are confirmation that the warnings about this vax are true, people are going to start getting sicker in waves, and th person who is going to be held up for blame is this geezer who will be easily expendable.

Trump Asks What Did Fauci Know About Gain
Of Function Research, & When Did He Know It?

Fauci has no idea that the NSA has set fire to his candy cane tower. He has been assured the smoke is nothing to pay attention to, but the indications are that something is generating and that Anthony Fauci is destined to be the next Doctor Death in the Mengele mould.

Fauci could not have done this if the 1% had not had pedo Bill Gates funding, the 1% built China to start the bioweapon, and Obama Biden had not signed off on this next phase. For those who are upset over this, allow those who have power to deal with this situation as Fauci is the guy who funded Zyklon gas and helped deploy it, he is not the main group in this. As this 1% now has decided it needs a historical footnote in this in who to blame, Fauci is their choice to destroy and that is a work in progress. It is best to leave him to the 1% and the hell they will cause him.

Fauci can not offer up blackmail evidence against the 1% who used him to do this, because in this 1% world the Ghislane Maxwells become expendable for what daddy did. He can not run. He can not hide. He is worse off than the 500 souls the FBI tracked down on January 6th, because those people can not call Donald Trump for help, and Fauci has Obama folk who are going to never pick up his calls.

The 1% is going to have to have someone to blame in this, and Anthony Fauci has floated to the top, because unlike the rest of the trolls, he whored for the camera, instead of quitting and running away.