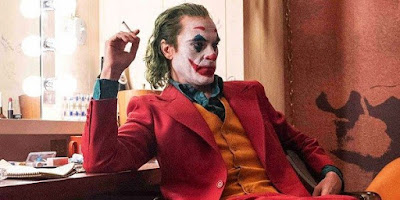 In the archives here is proof, of the Lame Cherry wrote the time line for the greatest actor of our time, Joaquin Phoenix to save the Batman franchise obliterated by that Mr. Alias Vagina and Christian Bale. TL and I have just watched this movie, and it is one of the finely crafted movies of history. It is disturbing. It is well written, well directed, well cast and well acted. It is the best Batman there ever was, save for the legend, Adam West.

I desire to make the point that Joaquin Phoenix did not act alone. He starved himself like the ridiculous Christian Bale has, but where Bale was horrifying to look at and added nothing to the role, the white starved form of Phoenix as the man who became the Joker, is not horrifying, but a a psychic scream which appeals to the viewer. You see a man who has been tortured his entire life, who has been abused, who has been belittled, who just wanted to make people laugh for the tears inside of him, and what he got in return was soul raped time and again until he fought back.

What Joaquin Phoenix accomplished with the writer was to turn Bruce Wayne in Batman, not into the crime fighter, but the Wayne family was the rich, heartless, elite who created the criminal element which Batman crusaded against. If you desire to watch real ANTIFA and BLM, that is who saviors of society are in this movie in they are standing up against the Obama Bush elite.

This is a masterfully crafted propaganda. The Joker kills his first 3 criminals who were beating him. It was justified. As the audience joins in this one human choice, they are silent in the journey when it is discovered that the Joker was abused as a child, his mother did nothing to stop it, she is crazy an she lies to him that Mr. Wayne is his father. After the police stroke her out in questioning, the Joke smothers her to death with a pillow as his catharsis.

The journey is one way, and gone is the Frank Sinatra music as the Joker begins emerging with his mask on in rock n roll mutation of sophistication. When the moment comes that the Joker who is about to be belittled again by Robert DeNiro who is the Johnny Carson king in this movie, and is standing up for the rich thugs who the Joker killed in self defense, the audience Jury unanimously agrees with the death sentence that the Joker blows off DeNiro's head, an act which most audiences relish as if New York did not exist, DeNiro and all that celebrated artistry would have zero audience or press.

Ryan Reynolds the Obama boy like Ben Affleck the Carter boy, are liberals, and yet the Joker is a conservative, a justice fighter in his genesis, against the very elite that the billionaires of the left now dominate the world over with virus.

I really believe only Joaquin Phoenix could have accomplished this roll. It would have been interesting so see Bale as Batman and Joker, but Bale does not have what is required that Phoenix brings as the best. This was acting, this was visual torture, this was the Biblical stuff of Constitutional Liberty as a Right, this was forensic psychology, this was Stockholm Syndrome, this was the dog kicked and beaten who finally bites back.

I did not realize the depths which by the Grace of God I unleashed in writing this time line. As dark as the Joker is, every Batman was darker in this movie series and more depressing. It saved nothing and no one. The war Batman raged was against those who rose up against their oppressors. No they were not BLM or ANTIFA. These were people who the elite stole all from like the gangsters of the 1930's who fought back, not against the people, but against the repressive system exploiting everyone.

In that, The Joker is a mirror image of the people hunted down by the FBI and DOJ after January 6th. It is odd that liberals like Phoenix signed onto this, but they thought it art, as he used his position to advocate for Black actors and actresses. The Joker is a condemnation of everything of the 1%.

The Joker is not a propaganda that one recovers from swiftly. The world is not going to recover from the reality which has unleashed upon it until the end credits roll.