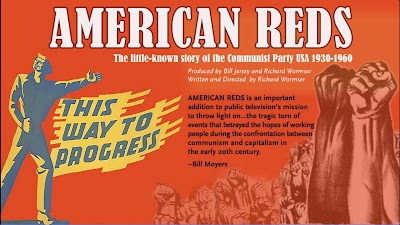 I told you the spiritual behind this transhuman ar in America was the 9. Now the Lame Cherry will tell you the political operation behind this, as the 1% are no more communists than you are.

You have to understand that everyone from Jimmy Hoffa to Joe McCarthy was against commies. There were always head up the ass liberals like CBS's Andy Rooney who was a communist sympathizer as numbers of FDR and the union people were. They worked hard to smear the Nazis and eventually rested control from the Operation Paperclip group in controlling America.

They were a sore bunch like Sean Penn who still has a grudge bigger than his Ann Coulter doll he burns her genitals with cigarettes with, because his old man was a commie and was blacklisted like most of this subversive trash. All this Obama British comrade stuff is the same set which has always promoted this managed slavery of national resources. They have laid in wait for a generation, an that is why all of this bizarre hatred of the foundations of America from Civil War Americans to Dr. Seuss to John Wayne have been unleashed upon. The 1% is after the Christian Protestants who God created, but this Obama layer is looking to even the score.

Mikhail Gorbachev before he took the billion dollar bribe to get out of Moscow, plainly stated that Senator Joseph McCarthy was right and set back the communist agenda 20 years. Gorbachev confirmed the Rosenthals who gave the Soviets atomic secrets were spies and should have been hung, which they were.

The point in all of this is simple. There has been a skulking ilk who have been listening to pissed off old pervs whine about not getting to create America in Marx's image, and they have had their cocktail crowds, set about taking over religion, education, politics and media, and the thing is they were not doing it. It was being done for them by the CIA and FBI, that is why J. Edgar and Bill Colby were murdered in they were in the way. I have told you the 1% does not give a damn about commies and their rule. Communism though allows them the police state to manage people and resources for their immortal world. Once that is no longer a necessary component, then the feudalism will appear and they will off these pinkos as not even the 1% are going to live in an ivory tower surrounded by communist shit holes.

So everything you are watching in tearing down America, is about evening a communist score by these losers who think they were mistreated for being traitors, and now they want "Whitey' who is really the Saxon race to be put upon, and what that means is those Border British Bastards of the coasts who have always hated the Scots, Germans, Irish, Scandinavian Saxons, want them eliminated as they signed off on this in the 7 Years War, the Revolution, the Civil War and every war since in thinning the ranks of those God bred DNA people.

This needs to be said and to be understood. Communists have little to do with this. The reason you hear about it, is the 1% wants them as a cover so you do not focus on their immortal agenda. That is why I refuse to ever call a Reagan Christian State a Red State, as they are Blue States, and it was that prick Tim Russert at NBC who vetted that 1% talking point and all of the Goddamn shills in the right started using it an that includes Rush Limbaugh, instead of fighting back, but Limbaugh was intelligence community funded, so what went was painting you as a red, so the real reds would be let loose and there would be this confusion about communists as no one knows who the fuck any communists are, because there are not any. This is another Qanon programme to seize upon the past, dust off a bunch of these Darwins who sucked cock in Harvard and Yale and tell a bunch of culls under age 30 that all this socialist shit is the way to go.

Now that you have this piece, you can understand more of the pieces which will be revealed.