The Vaxed Leaders at the Tard 7 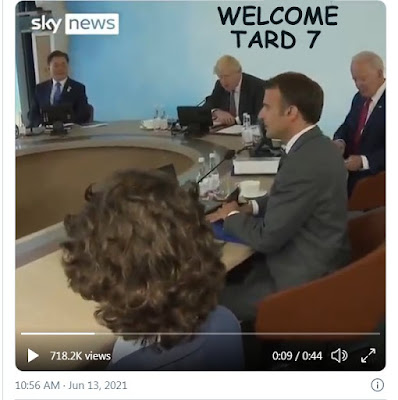 I was watching the Benny Hill of England not being able to speak coherently, brain warped Angela Merkel, some black dude from South Africa whose 85 IQ now rivals Macron of France and that mop head Trudeau of Canada, as dictator Xi of China looks like he is ready for his own Mao exhibit in Peking in these wetware all look and act brain dead. They look like they are at the tard ward for fried brains from huffin' meth.

The best part of this G 7 is Pedo Joe is busy correcting Boris Benny Hill Johnson for forgetting the Negro from South Africa...........Johnson already introduced him, and all of the inmates break out in laughter at Biden's senility..........or they are just laughing because that is what tard brains do in the assylum..

So that is the world. The European 1% through Obama Biden, helped Peking make a bioweapon to take over the world. These are the most heinous criminals on the planet and they are all witless folk.

You could put 7 chimps in that room and I would have as much confidence in their ability to lead us into a nuclear war.