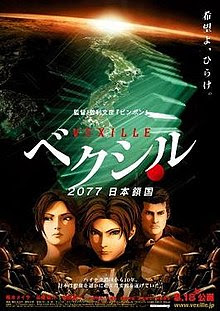 TL came across some Japanese anime which, perhaps it would be best to say it this way...........

There was a corporation which created this virus, but it was no like any other virus ever, because it was a virus which evolved humans. It made them transhumans. It was special as it converted humans from inside their cells. A vaccine was developed to fight this, but the vax was not what it was at all, as it was changing people in their cells to be metallic, synthetic forms, and once it reached the human brain, it made them perfect slaves as zombies.

Sounds remarkably like the science which is being exposed on the Prion Vax. In the Japanese version the people become scrap metal and expendable. What is interesting is that was released in 2007 AD in the year of our Lord, about the same time that Dr. Fauci and that group were converting the bat Coronavirus to a biological weapon in the patents issued.

If you can access this to watch the first half hour, you will hear this all explained in a few minutes and it sounds exactly like what the world is facing. I wonder sometimes how in the hell the Japanese figure things out. I wonder how model plane builders come up with super secret planes.

The thing is that Vexille which means isolation was inspired by something the Japanese produced for four years under the name Manga ,which translates as Apple Seed back in 1985. Hopefully you did not miss the connection to Eve eating the apple from the Tree of the Knowledge of Good an Evil and was driven away from the Tree of Life before that fruit could make them immortals.

This vax is paving the way for the false tree of life to convert humans. It appears someone in Japan was privy to what the 1% was plotting.