Dick Durban States that Millions of Died from the Vax 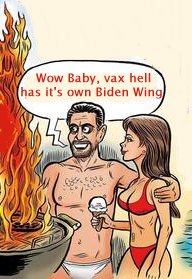 If you recall it was Illinois Senator Dick Durbin who rose to the plight of our fellow Americans held in torture and denied human rights by the Department of Justice after January 6th, and now once again Richard Durbin has shown his true affinity with the right wing in America by rising on the Senator floor, using the cover of castigating the DIA insiders of Tucker Carlson and Laura Ingraham, to reveal that millions of people have died from the Coronavirus vax.

The Senator states that we may never know how many millions of people were exterminated by this Obama Fauci Modern vax.

It is an extremely courageous thing for Senator Durbin to join with the ReVaxNiks in pleading for the Vax Lepers in warning other to not join them, so that some kind remedy can be provided to these DNA injured people, who in no fault of their own, were never provided information which would have of course, caused them to pause and make further assessment do the efficacy of this vax.

Perhaps there is something in this stampeded through brain rot drug the FDA is pushing which would help the brain rotting vaxed. While it is doubtful that anything will stop the prion in Ivomec and Chloroquine with zinc, at least the progression of this might be slowed.

Yesterday while at the grocery, our elderly neighbor, was parked at an angle in the parking lot. We have witnessed numbers of these instances now in Vax Parkers. I know for certain that he was one of the first. In fact, he and his wife as elderly people went to another state to be vaxed which was not even allowed, but they were injected with Moderna. Brier Patch people talk to each other in check out lines and I was amazed in people who did not know the vax was dangerous, knew which vax was which and which one was more effective and who had which vax to provide.

I have noticed aging in women and a vax drunk in the males. Both have though been parking odd, and over driving in our observations.

There is appreciation for Senator Durbin, as we all know from the videos of empty syringes, saline solutions and collapsible needles that the front people for the 1% were never given the kill shot. Senator Durbin was no more vaxed than Dr. Anthony Fauci who could not remember which arm he was vaxed in. Fauci though keeps herding the masses to this vax, but Dick Durbin in a truly 1776 statement warned the world to join him in not being vaxed.

Such bravery is very rare in this corrupt system. One never hears Christopher Wray saying the FBI should not be framing Americans and hunting them down. You never hear Bungholer John Roberts say what a dirty pedo he is in why he got blackmailed into betraying America. You never hear Hunter Biden confess what a damned crook his daddy made him out to be. No it is only Senator Dick Durbin, unafraid of the Obama Syndicate and Biden Mafia who stands on the Senate floor proclaiming in the clever way he can, a warning to the world how dangerous this vax is.

What a true Patriot Senator Durbin is. A real protector of the right in America which John Thune and the rest of the frauds can never be. It is such a shame that that Afroid murderer of Ashli Babbitt did so to impugn the honor of Senator Chuck Schumer, another closeted right wing zealot who has proven time and again his magnanimous care he has for the apple of his eye, Trump supporters.

God bless Senator Dick Durbin, the last American in the US Senate.

Are The Good Times Over For Biden?