Come out of our religious Cults 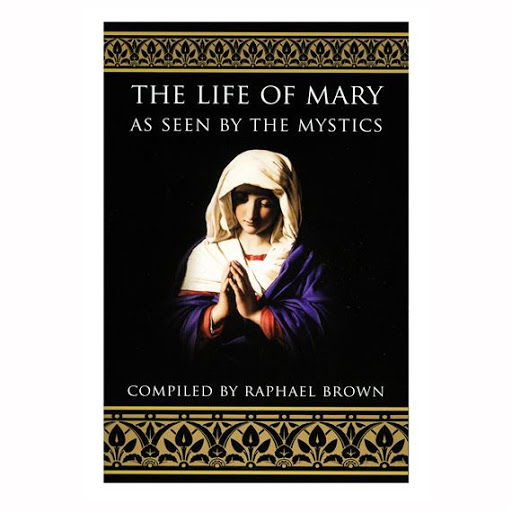 THE LIFE OF MARY

as seen by the Mystics

The sources of this are the Catholic seers, Bridget of Sweden, Elizabeth of Schoenau, Mary of Agreda and Anna Catherine of Emerich. The Lame Cherry will be blunt in this, in these women were at the least deluded by demons and at worst were possessed by demons, as they were the worst of this Vatican cult of universal religion.

What I desired to expose to you in the blasphemy of the Catholic religion which was bulit by Simon Pater the sorcerror of the Acts and not Simon Peter who never went to Rome, is found on page 249 in the chapter of The Ascension.

This comes from the Queen of Heaven, who is not the Virgin Mary, and in writing this, I honestly feel that I have been moved to cleanse this remarkable woman from the filth which has been perpetrated against her, and our Lord Christ Who is equally supportive of someone speaking the Truth and exposing the lie of this Whore of Babylon religion which has an idolotrous Mary cult.

The quote is said to come from the Trinity, that is a lie, and the Lame Cherry by the Holy Ghost I will explain this lie.

THIS IS THE PROTECTORESS OF THE CHURCH AND THE INTERCESSOR OF THE FAITHFUL. IN HER ARE CONTAINED ALL THE MYSTERIES OF OUR OMIPOTENCE FOR THE SALVATION OF MANKIND. WHOEVER SHALL CALL UPON HER FROM HIS HEART AND OBTAIN HER INTERCESSION, SHALL SECURE FOR HIMSELF ETERNAL LIFE. WHAT SHE ASKS OF US SHALL BE GRANTED.

The way to deal with this is by Christ's example in rebuking satan, in quoting Scripture. There is only ONE NAME by which all people can be saved, if they repent, and that is Jesus the Christ.

The reason only Jesus as thee only begotten Son of God can save people, is Jesus is the Creator or the Thought or Word of the Father, in the Father's Thoughts have a Life to Them. By speaking "Let there be" Jesus created all, and that means us.
When Adam and Eve sinned, that meant they were no longer set apart. When they had the knowledge of good and evil, they new rebellion or sin against God by their actions, and once they were sinful they were dirty like a stained white sheet and there was nothing they could do to clean themselves to be right with God. The only One Who could redeem them or clean them was God. So God had a plan to sow Himself by the Holy Ghost into a human body, inside of a woman with a pure heart. Mary sinned, as we all sin, but by God's miracles Christ was born without sin, and He never sinned.

In God's rules, if you are condemned to die, it will require another death to pay for your life. No exceptions are for this. A Covenant is a marriage in till death do us part. As people are already dead in sin, Jesus was the only Person Who was living, and as Spirit can not die, He took on the human body, so it could be executed. That is what it means in His being the Lamb of God Who takes away the sins of the world. He was the perfect sacrifice and none other will ever have to be made in this New Testament or Covenant, as God can not sin, and God can not fail as people do.

In knowing those facts, you understand that Mary can never give eternal life. No human praying for anyone else can give them eternal life or God would have passed a law to make it lawful. Jesus death is what forgives you of your sins, and Jesus Resurrection is what gives you eternal Life if you believe.

In the following Bible verses from the Book of Acts and I John, Scripture refutes the above quote completely and exposes the blasphemy of it.

There is only One Name given among men, whereby we must be saved and that is Christ the Lord.

Likewise, there is only One Advocate with the Father, and this is Christ the Lord.

Nowhere in the Bible does it ever witness that Mary or anyone else helped Jesus suffer and die, or Jesus has delegated authority in someone else to save you.

The Acts of the Apostles
Chapter 4

10Be it known unto you all, and to all the people of Israel, that by the name of Jesus Christ of Nazareth, whom ye crucified, whom God raised from the dead, even by him doth this man stand here before you whole. 11This is the stone which was set at nought of you builders, which is become the head of the corner. 12Neither is there salvation in any other: for there is none other name under heaven given among men, whereby we must be saved.

1My little children, I am writing these things to you so that you will not sin. But if anyone does sin, we have an advocate before the Father— Jesus Christ, the Righteous One. 2He Himself is the atoning sacrifice for our sins, and not only for ours but also for the sins of the whole world

If you put your trust in Mary, put your trust in the Pope or put your trust in anyone or anything else to save you, you are going to hell as there is only One God and God is the Judge an Father with the final decision.
If our hearts condemn us, we have as St. John teaches someone in us in Christ Who is greater than our condemnation of ourselves, for Christ even overcomes our doubts and fears to save us.

What satan did in these fake Mary apparitions is produced an idol cult in the Catholic religion, like most of what is in that anti Christian cult. If you have problems, you take them to God. God loves you and no one stands in the way of His relationship with you or anyone. You confess your sins and God forgives the repentant and the Pope or padre has not one thing to say about it.

There is a great deal of blasphemy in this book of Catholic seers, in Mary is the one interceding for the disciples who ran from Jesus when he was betrayed by Judas. The fact is the moment that Peter even in denying Christ, broke down and cried in remorse of his saving himself, that penitent heart was forgiven in the confession of his tears. There is no limbo, there is no waiting around for Mary, there are no barriers. Forgiveness is immediate from God when you go to Him and repent.

One can see in these demonic lies why the current popery is lying and saying you do not need Jesus to gain eternal Life. The Pope and Vatican leaders have thrown away Scripture for seers deluded by satan and they say Mary will save them, when she will not.

When Moses died, the archangel Michael disputed with satan over Moses body. satan wanted the body to turn it into a cult religion to be worshiped to thwart God's Plan of salvation. satan by these self absorbed seers, has turned Mary into a false religion, and the Whore of Babylon perpetrates it, and Melania Trump did no one in this world any good by promoting this Queen of Heaven cult, instead of rebuking satan as the Archangel did.

People either come out of all of these religious cults, and that includes the 1% who corrupted most of the Protestant sects, or you will be condemned along with the sodomites and marianites in this anti Christ religion.

This is the Lame Cherry in another matter anti matter exclusive.