It was just a biting fly 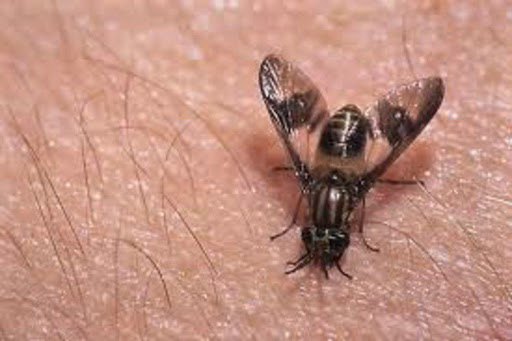 I have posted previously of my experience in dry years with a biting fly which was a tan brown fuzzy thing, that you could not feel the bite, but it would swell up to half dollar size, raise a half inch and become hot and spread poison throughout the body, and last for about a week.

Job would have died if his body was covered with this kind of biting fly, and fortunately after decades I have not had another experience with them.

Most of you know the horse fly and deer fly, both creatures which annoy and bite so you know you are being bitten. I came across a new gem though in building a barbwire fence adjacent to grasslands and road ditches with TL which really had me in misery for a few days.

I have no idea what specific type of fly this is, except it was smaller than a horse fly and not that tan fly. I actually killed one which lit on me and that one I felt bite, but the others were on my arms and other exposed parts as I was working.

What was unique in this is that it produced a mosquito bite  type red spot. It itched and in a day, it turned into an almost white bullseye ring and really was unpleasant. I put on hydrocortisone which is over the counter and that helped, but for 36 hours they were annoying. A few bites I could have dealt with in ignoring them, but I had a dozen which made me feel like I was one big itch spot.

After 36 hours, some developed a white type pimple and then they began to fade.

I have had buffalo gnats, which did make me sick in they had me bleeding and bit all over. Have had most biting and stinging insects. but these two unnamed genus of this family have been the worst. They even outdid spider bites, and I had one big bastard bite me in bed as a teenager, that I rolled over on it, and it bit me over a dozen times and that raised a half inch red the size of a half dollar, and my gland swelled up, so I am familiar with toxins, but this fly on the other place is new to me. Odd thing is we have none of them on the place we are residing which is just a few miles away.

The reason for this post is, there are numbers of Mike Cernovich dirt bike travelers who think when they bug out on the boogaloo that it will be like a movie. No there will be many things out there and most of those things will be biting bugs. You have never experienced what it is like to be in shit hole Ethiopia with flies on your face like frosting and your not fighting them anymore.

The suggestion is bug nets and cortisone in your evac packs or to be in a location where you are not discovering that your 150 dollar walking boots are not turning your feet into blistered blood clots and wearing out after 100 miles of walking. Each step is going to be misery and each step will be some biting bug.

I will add this bit of information too. Lowlands, even ditches in shade in heat are humid and you will not be able to breathe and in cold they will be colder and wet and full of snow or rain. I actually had an animal moment in I sat down in some shade on a gravel road. I had run out of my half gallon of water as we were finishing up and I was cotton mouthed dry, but as I sat on that road, it was like a bake oven under me. I told TL if the sun was out then I would have been broiled top and bottom.

The survivors are going to learn a host of new things in your non air conditioned vehicle world. There is a real world out there that all of your prepper experts have no clue in how to deal with it.

This though has been your million dollar Lame Cherry lesson in matter anti matter.