Queen of the Collection Plate 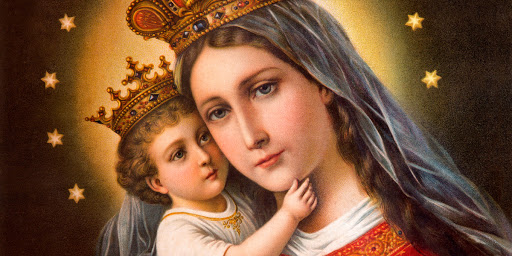 If you desire to know where all the bullshit comes from in Christianity, it is Catholics, who have to be the most gullible group on the planet, as just as the Jew has the Talmud and the Muslim has the Koran, Catholics have a hodgepodge of demonic revelations from their female seers.

I'm reading a compilation from the 1950's by the Catholic mystics of Mary, which are the visions of four nuns from the Queen of Heaven, yes that is the Virgin Mary or this demonic overlay of her who as that real demonic bitch, manifested by Semiramis with Nimrod, has been deceiving the gullible for centuries.

Queen of Heaven was a title given to a number of ancient sky goddesses worshipped throughout the ancient Mediterranean and the ancient Near East.

If you want to know where the odd things of Christianity arise from which are not in the Bible, they are in these recitals. Jesus born in a cave and not a stable. That is from these nuns.

You may be interested to know that all these people only ate light suppers, light lunches, light meals, even when the 3 Magi appeared and the poor Joseph and Mary had nothing, but Joseph retired to prepare a light supper for 200 of their servants and family.

All of these accounts are overflowing with gaping holes. There is the time the very aware Mary, born that way, decided at age 3 to eat lightly, and then go out on her own and distribute things to the poor. Yes a 3 year old is out running errands. But you must understand the immaculate conception of Mary was due to her parents, Saint Ann and Saint Joachim, as Mary was born sinless in some weird story which she was not really born, she was just sort of prayed about and popped out without being born.
You can be assured that Mary produced Jesus the same way in she was not stretched out, torn or .........well Baby Jesus was born absolutely clean.

So Mary, the same one that Melania Trump is in a cult over, told the priests before she spent her first years in the Temple, that she would be a vegan and would rise and pray 3 times a night.........all this at age 3. The priests said she could eat fish and only rise to pray at midnight just the once.

It is pure revulsion and torture in reading this blasphemy. It is sickening sweet with all the hand and feet kissing and all the slave to everyone, and the endless giving everything to the poor..........after the Temple got it cut, which was good for the Vatican.

What I really winced at was how Jesus is a real lighweight. Sure he calls Mary his dove and she is called the wife of God, which the Bible never states, but lightweight Jesus, you will recall only was tempted by the devil. Not Mary, why she had 7 legions of demons, that is 7000 demons tempting her, before satan swooped in as a scary dragon.

Mary though is more than Jesus in being a tough woman, so she made it, and when she was not levitating, laying on the floor in the form of a cross, which makes no sense as she might as well lay like an AK 47 as they were both execution weapons, she was having Angels do her work for her, and when she took off to visit her cousin, she had 10,000 Angels guiding their Queen of Heaven.

God must though in all those Angels must have an Angel shortage as Mary sends her Angels to be with her parents, as of course those Saints do not have Angels of their own. See what I meant as the bullshit holes in these demonic stories.

Where was I?  It really does not matter as I'm suffering half way through this book that popes, archbishops and others have embraced and have led people astray. Mary was designed by satan, just as satan had tried to get Moses body, to make Moses into an idol to turn people away from God.

The "Queen of Heaven" is mentioned in the bible and has been associated with a number of different goddess by different scholars, including: Anat, Astarte or Ishtar, Ashtoreth, or as a composite figure. The worship of a "Queen of Heaven" (Hebrew: מלכת השמים‎, Malkath haShamayim) is recorded in the Book of Jeremiah, in the context of the Prophet condemning such religious worship and it being the cause of God declaring he would be removed his people from the land.

Seest thou not what they do in the cities of Judah and in the streets of Jerusalem? children gather wood, the fathers light the fire, and the women knead the dough and make cakes of bread for the Queen of Heaven. They pour out drink offerings to other gods to provoke me to anger.

God forbids worshiping anyone other than Him. God has no wife and never stated He did. This is demonic of the same order which was conjuring demons off of these old reference points in nature.

The story of Semaramis was one of the Queen, how bore a son, after her husband Nimrod was dead, in an immaculate birth was not a forerunner of Christ or Mary, but a bastardization of how Christ would appear. It is part of the Great Deception and will continue to expand in these last years.

Catholics believe this blasphemy because the padre says it is kosher and none of it is in the Bible. It is like the stations of the cross, none of that is in the Bible, and Mel Gibson made a movie which is Catholic, and the message is, Jesus could not have done it, if people had not been there to save His ass.

I'm cringing at what the future stories will bring, as this stuff is so boring and just stupid, it is beyond belief.  What is the beautiful story of salvation suddenly is turned into a magic show conning you to impoverish yourself so it ends up in the Catholic collection plate.

Catholic means universal, as in what it is, a religion founded on Vatican Hill, of all the pagan religions melded into Christian doctrine to bring in the numbers of pagans who littered Rome. Christians are not to worship as other cults do. There is One God, not an entourage and a wife which appear because the Almighty God can not handle the job, and Jesus can not handle interceding for every one of us.