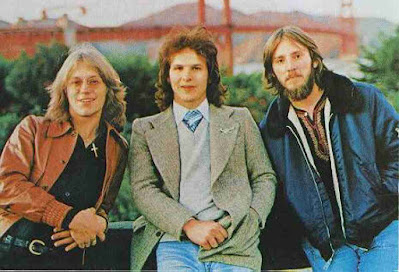 I have posted my judgments on who are the best lead guitarists in bands, but that was dealing with electric guitars, and I'm moved to address something here, as I deliberately left Ted Nugent out of this group as my criteria were more based on numbers of hits and power tracks. That is not to state that Ted Nugent, for example in Wang Dang Sweet Poontang, in the Nashville Live track, is not the best guitar performance in history. He is beyond human in what he does with that guitar. Eddie Van Halen is a fantastic guitarist and the best in fret board play and getting things to come out of a guitar, but even Nugent for pure blues music is without compare on that track

In that caveat, I'm going to switch gears here in something that surpasses all of the lead guitarists in a band always overlooked in songs in which Dewey Bunnell did things with music and an acoustic guitar which forever changes the way you look at music once you understand what he and Gerry Beckley created. If the names do not sound familiar, you now the band as America.

This band in the 1970's produced two songs which are masterpieces. The first in the breakthrough Horse With No Name is stunning, because the song is played with two notes by Bunnell, until Beckley adds the wonderful picking, which accents the bass and bongos perfectly.

Bunnell with down strokes and up strokes, slaps or stops, does things to sounds coming out of a guitar which if you listen close to other bands, you often wonder, "How in the hell are they getting all those sounds out of a few instruments when it sounds like a dozen?" The key to it is the double stroking of the stings up and and down, but Bunnell takes it to new levels in his four beat strumming.

Likewise the complicated work which was undertaken in Ventura Highway is amazing in the picking and the strumming. I was watching two versions of that song over the years, in the early version Bunnell plays his guitar fast in a different melody, while Beckley and Dan Peek, so the slower strumming. In a later version, Peek is driving the sound with the fast rhythm, while Bunnell is playing the slower chords. To make this really interesting, you can watch Beckley literally switch throughout the song from the fast strum to the slow, depending on which sound the band wanted to push to the front.

As I said, you hear this wonderful music and never think about it, but once you start studying what America was creating, it is a complexity which is not found in most bands, and in most cases, America was accomplishing it with acoustic guitars and strumming, which is supposed to be the tard method of playing music, and yet they have accomplished something which is not ever noted.

I believe the greatest tribute to America is most guitar teachers, feature one rock song that they teach their students and that is A Horse With No Name, as it is just two chords and while you have to manage the complex strumming, which takes some time, all the children in the world are learning to play Bunnell's and Beckley's way of guitar. Think about that as we always hear of George Harrison's or Jimmy Hendrix as masters,  and yet when the sounds are filling up studios, bedrooms and basements, it is these two artists style which is teaching music to people.

I also do not like Tin Man, which was a major hit, but adore Magic which was their last big hit in the 80's when Rock was dying. But the work that these men did, has never been praised enough, as they honestly surpassed the electric guitar masters, which never equaled them.

America - A Horse With No Name ( Official Video ) - YouTube